In our fourth Card of the Day article, which was posted way back on March 29, 2020, we looked at the 1982 Topps card of Tim Foli. I just recently mentioned how long it’s been since I used a card of Jose Lind in this feature and surmised that it would be tough to find a bigger gap in appearances here. Today we look at Tim Foli for the second time. Lind’s first appearance was our 11th article in this series, so that stretch took all of three days to usurp. I wasn’t trying to beat the “record” I just talked about, it just happens to be Foli’s 72nd birthday today and I figured it would be a good day to use him.

I went with Foli’s 1980 Topps card because it has an outstanding action shot. I went with his 1982 Topps card very early in our series because I love the uniform he is wearing and I want the Pittsburgh Pirates to bring it back for a throwback day. Maybe Sunday home games one year. Just work with me here, people! Anyway, the 1980 shot is amazing, and I think you will agree with that assessment. Let’s get right into the card, which is #246 in the 1980 set. 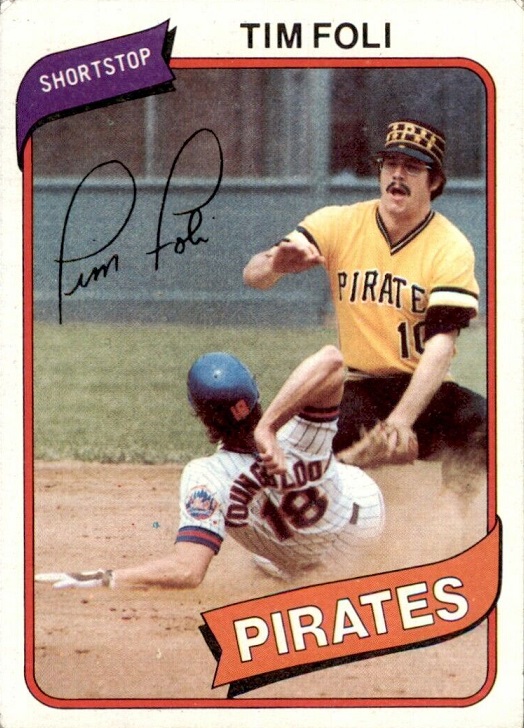 Man, look at that action shot. That is great stuff. Foli hanging tough at shortstop, but he knows he’s probably in for some contact because it’s not 2022 and contact happened on plays at second base back then. That’s Joel Youngblood sliding into second. His claim to fame is that he played for two different teams in two different cities on the same day and he collected hits with both teams. The crazy thing about that fact is that he didn’t even play a full nine innings that day between both stops. Other guys have played for two teams in the same day due to a trade between games of a doubleheader, but he’s the only one to do it in two different cities, Chicago and Philadelphia to be exact.

That’s Foli in a 1979 game. He was actually teammates with Youngblood not too long before this photo was taken. I was going to see if I could find this play, but the Pirates played ten games in New York that season after Foli joined the team, and both he and Youngblood played in all ten games. You can eliminate the early season series of four games because Foli has seven stars already on his hat, which would have been amazing in such a short time (approximately five weeks into his time in Pittsburgh). I also like to eliminate the night games right away because photographers aren’t snapping night game photos for cards, so those two things took away eight games without even a blink. One of the remaining games has Youngblood singling to center field to score a run, then advancing to second base on the throw. That could be this play, but probably not. That game had a 5:30 start time and the play happened later in the game. The only other possibilities are from a September 9th game when Youngblood singled and stole second base OR when he singled later and moved to second on an errant pick-off throw. One thing that is important for this match up is that I found photos from the game that show the Pirates wearing this particular pants/top combo that day. My guess is that it’s the stolen base, but I can’t be 100% sure. One other quick thing to point out is the angle of Youngblood’s right arm. Just looks odd. 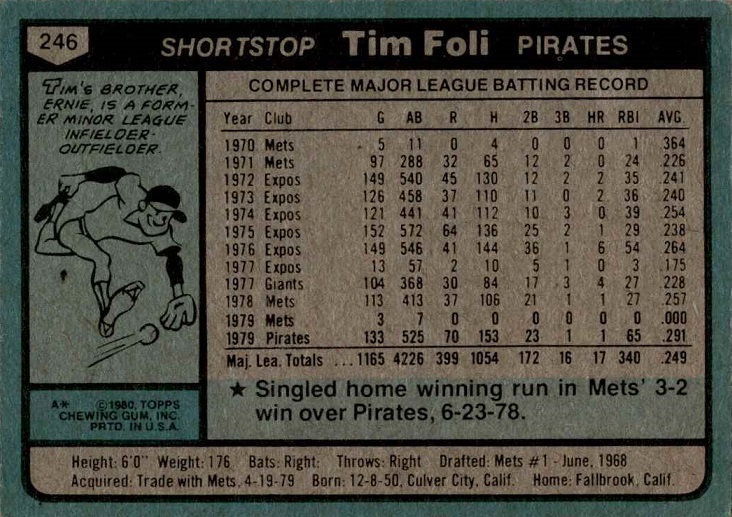 I’m not a fan of these cards backs because of the color combos, which make them harder to read when they are in hand, and a player like Foli has 12 lines of stats. I didn’t even mention it for the front, but I don’t particularly like them either due to the color combos, though I like the look of the banners with shadows for the team name and position. Wouldn’t that bottom one made this card look so much better in black & gold? Anyway, let’s get back to the back, pun sort of intended. The fun fact on the back here isn’t so fun. Why would they include a footnote where Foli got a big hit against his current team? Why not the other way around, especially since the Pirates won it all in 1979.

I recently read a little about Foli’s brother, played here by Generic Gray Topps Man. It had to be disappointing for him not to make the majors. The guy played an entire season at Triple-A at 22 years old, yet he was out of baseball four years later. I was going to say it probably had something to do with the glove that he used (check out the glove in the cartoon), but it had to be tough to get that close, so we will leave it at that.

If you want to get the 1980 Topps Tim Foli card, it’s one you have tons of options under $3 delivered. Someone actually has one that is signed by both Youngblood and Foli and it’s authenticated. It’s pricey at $70, but it’s such a cool looking card. You can get a PSA 9 of this card for $35. There are also some sellers who have cheap lots, such as one for 15 of these cards under $10, with a best offer option as well.