Today’s Card of the Day comes from a minor league set. I wanted to feature Pittsburgh Pirates pitcher Odell Jones today. On this date in 1978, he was part of a large trade between the Pirates and Seattle Mariners. He was sent to the Mariners in the deal, but the Pirates got him back in another trade made right before Opening Day in 1980. Jones has one card that shows him on the Pirates, a 1978 Topps card. We just posted a 1978 Topps card, which you already know because you are here every single day for this daily series. So instead of saving Jones for a rainy day in the future (or repeating the awful 1978 Topps set), I decided to look at one of his minor league cards from his time with the Pirates.

I had multiple options for a Jones minor league card with the Pirates, but the availability of scans really limited me. The back scan for today really isn’t great, but it’s good enough. He appeared in at least four minor league sets during his time with the Pirates. Three of those were from the 1980-82 seasons when he was with the Portland Beavers of the Triple-A Pacific Coast League. I settled on the 1980 card, which we will now look at here. Jones is card #17 in the set. 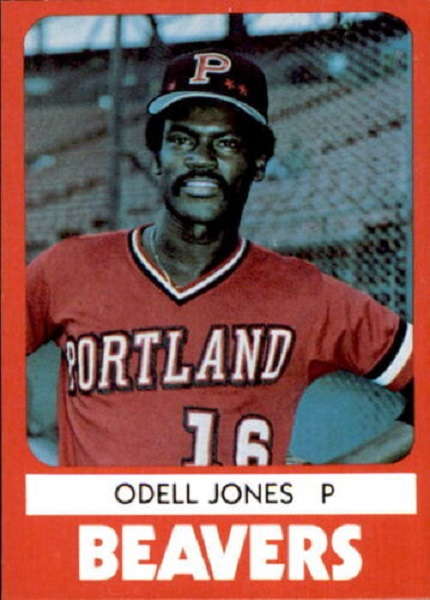 I noticed something interesting while going through these cards. Check out the stars on his cap. Those look just like the Stargell Stars that would show up on Pirates caps at that time. However, no one else had red stars on their cap in the set, and only one other player had stars at all. That was Pascual Perez, who has yellow/gold stars on his cap. I did notice that these cards probably weren’t all photographed at the same time, as some of the players are wearing road uniforms (see above) and some had the home whites. I say “probably” because there are no action shots, so it’s possible that they switched them up so everything didn’t look the same, but I also noticed some different backgrounds. So it’s possible that Perez and Jones were photographed later and had time to accumulate stars. 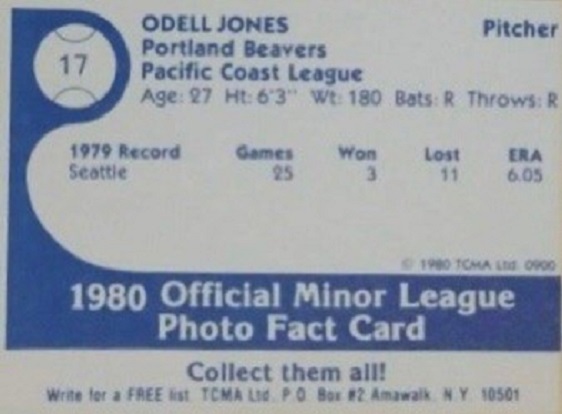 The back is a little blurry because the best scan I could find had to be enlarged for the article. It’s funny that they call these cards “photo fact cards”, when they went so light on facts. These cards went as light as possible on the stats, and some of the stuff they tell you on the back, you already knew from the front.

Jones spent two games in the majors with the 1975 Pirates. He then played the entire 1977 season in the majors, then got into two games for the 1978 Pirates. After the trade to Seattle, he spent the entire 1979 season in the majors. As you can see, he went 3-11, 6.05 in 25 games. Expanding on that a bit, he pitched 118.2 innings over 19 starts and six relief appearances. He ended up spending all of 1980 with Portland, going 6-7, 4.13 in 98 innings over 17 starts and two relief appearances. Jones pitched well in somewhat limited time with the Pirates in 1981, but his best career work came with the 1983-84 Texas Rangers. He was a full-time reliever there, part-time as the team’s closer.

If you’re interested in this card, you have a few options on Ebay. None of the cards are cheap, mostly due to shipping. The value is low on the card, but they are tough to find individually for sale. One interesting option, depending on the discount you can get of course, is someone has all four of his Pirates minor league cards for $8.99, with a best offer option. With the prices of the others, the cheapest one being $3.50 delivered, you might be better off getting the four cards, especially if the seller will work on the price.