Today’s Card of the Day comes from one of my least favorite sets, but it’s the player who is the focus. The Pittsburgh Pirates and Kansas City Royals pulled off a big trade on this date in 1973. The Pirates sent infielder Fernando Gonzalez and pitcher Nelson Briles to the Royals for three players. Not much came from the deal, but it’s the size of the deal that makes it significant. Gonzalez hasn’t appeared in our Card of the Day series until today.

You might be looking at what I wrote there, then looking at the title and wondering why I’m featuring a card of a player five years after he was traded by the Pirates. Gonzalez came back to the Pirates in July of 1975 when they sent two players to his team in Mexico to acquire him in a trade. Technically he was playing with one of the Pirates minor league affiliates in 1975-76, and he actually rejoined the Pirates at the start of the 1977 season. He played in four seasons with the Pirates, 1972-73 and 1977-78, but he had just one card in each stint. I went with his 1978 Topps card over his 1974 Topps card because a high grade copy caught my eye first. 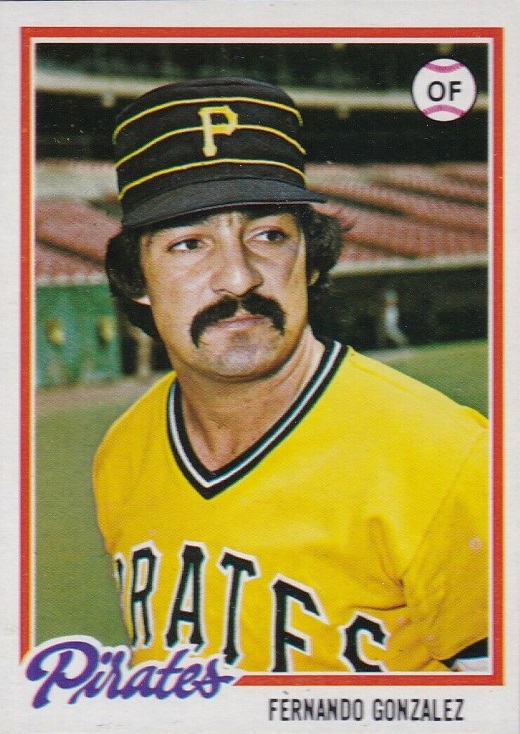 As you can tell by the look on Gonzalez’s face, he doesn’t like this set design either. Not only is it a simple design, they handed the Pirates players a red border for the photo and purple for the Pirates name color. I know every time I think of the Pirates, I think of red and purple. Actually, this particular photo of Gonzalez is what I think of for the Pirates. The colors on this card are great with the gold uniform tops and pillbox caps, which is why I selected it over the 1974 Topps card for him. If you scroll through photos of the two of Ebay, this one stands out so much more. I like the 1974 pose better, plus you see the Clemente tribute patch on the sleeve, but that card just feels like all of them are faded. 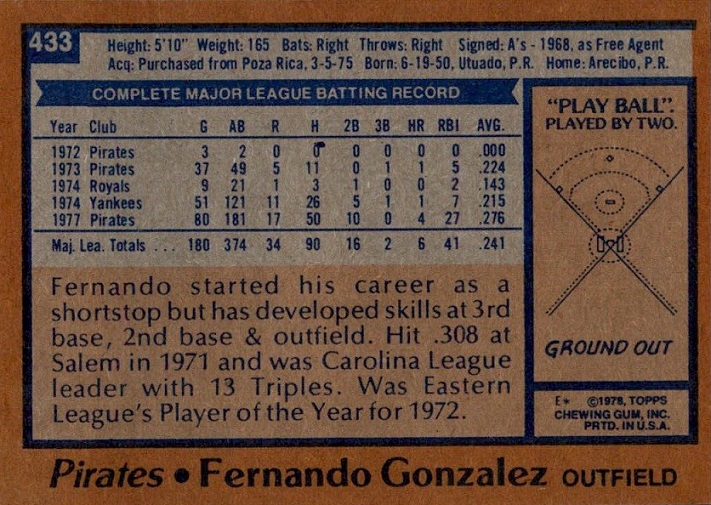 The backs of these cards are an awful color combo, which sticks with the theme of the front. You can see the limited usage Gonzalez saw in his first stint with the Pirates, as well as how little he played with the Royals after the trade. You can also see the gap in his big league career as the stats go from the 1974 season to the 1977 season. I’d say he did fairly well upon his return to the majors. He lasted just nine games with the Pirates during the 1978 season before he was lost to the San Diego Padres on waivers. He ended up getting more than 60% of his career at-bats with the 1978-79 Padres.

These cards had game scenarios on the back. You can see here that Gonzalez was a ground out, which might explain his look on the front of the card…though I’m sticking with the poor set design theory. Some of the cards in the set had backs that explained the game, so until you got one of those, it was a mystery as to why players just had random baseball plays.

There is quite a selection of his cards, included high grade examples, authenticated autographs and just regular raw common cards. The latter abides by all rules and regulations for common cards on Ebay. Plenty of options in the $2-$3 range delivered, and you should never pay more unless the card is signed or in a graded holder. A PSA 9 of this card recently ended for $70. A graded autograph ended around $30 recently. He doesn’t have an autograph that you can definitely tell it’s his name, but it’s nothing like the modern garbage current players try to pass off as autographs. His is decent looking, with a bit of flare, though it’s also a bit inconsistent so I recommend getting an authenticated copy in a holder. There are options around $30. There are multiple PSA 8 options for him under $20 delivered if you want a nice high grade copy.