This might be a record for quite some time on here. This will be the second appearance in this series for Jose Lind, second baseman for the 1987-92 Pittsburgh Pirates. His first appearance came back on April 22, 2020 in the 11th article in this series. That was before I was posting these almost literally as the title says, every single day. Occasionally I’ll now throw in a different article, like a Game Rewind, but I enjoy writing up the Card of the Day articles more, so I hardly ever stray from them. I should more often though, maybe once a week. We will see what the future holds.

For now, we stay the course with another Card of the Day article, featuring Jose Lind for the first time in 2 1/2 years. He played during an era of many card choices for every regular player, so I had plenty of options here. I just went with the old “scroll Ebay until I see something I like” technique to pick a card. I landed on the 1988 Topps card, which stood out because of something written on the front. Here’s a look at card #767 from that set, featuring Jose Lind. 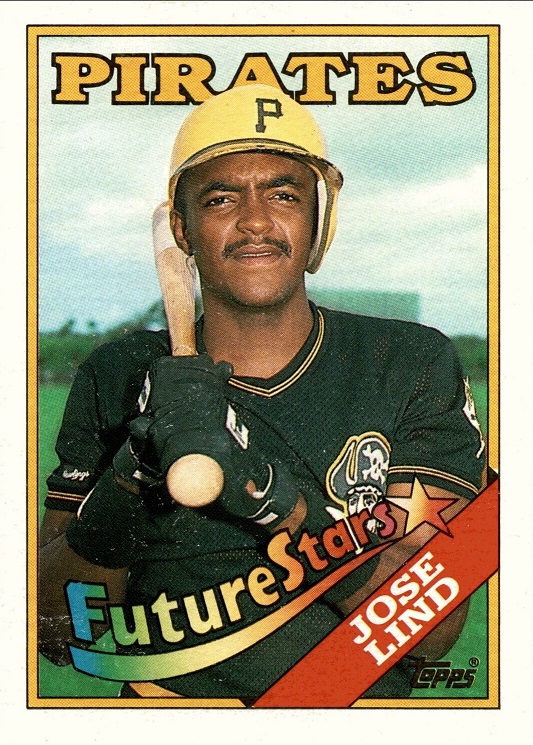 There is a lot going on with this card. I’ll start with the design of this set, since we haven’t featured it here much. It’s a bit tougher to tell here because of that Future Stars logo, but this set is rather boring. I think that’s why I chose this particular card. Topps had to follow up the great 1987 design and they really fell flat. I do like one thing that they did with this set. They used team colors in the design, as you can see the gold in the inner border and the team name. It’s obviously not a perfect match as you can tell by the team name right next to the batting helmet, but it’s close enough that it works well with the Pirates uniforms. Speaking of the uniform, I’m a big fan of those batting practice tops. The logo is slightly blocked here and you don’t see 90% of the sleeve patch celebrating the team’s 105th anniversary (also 100 years in the National League), but it’s still a great look. I also like the reverse batting helmets with the black “P” on a yellow/gold helmet.

As far as Lind getting a “Future Stars” tag, I think he low-end qualifies. He was a Gold Glove second baseman, who was the starter on three straight pennant winners. The guy put up a 3.5 WAR season in 1988. Of the eight players who got votes for the American League Rookie of the Year in 1988, none of them reached 3.5 WAR that season. Only two National League Rookie of the Year candidates had more than 3.5 WAR. He’s not an All-Star type player, but you have to remember that Topps was limited to players who were close to the majors, or had minimal experience at the time. They hit big on Al Leiter that year, and Kevin Elster was another solid selection. Some new players showed up in the Traded sets as well. So I won’t say that Lind is a great selection, but I also won’t say he was a miss either. 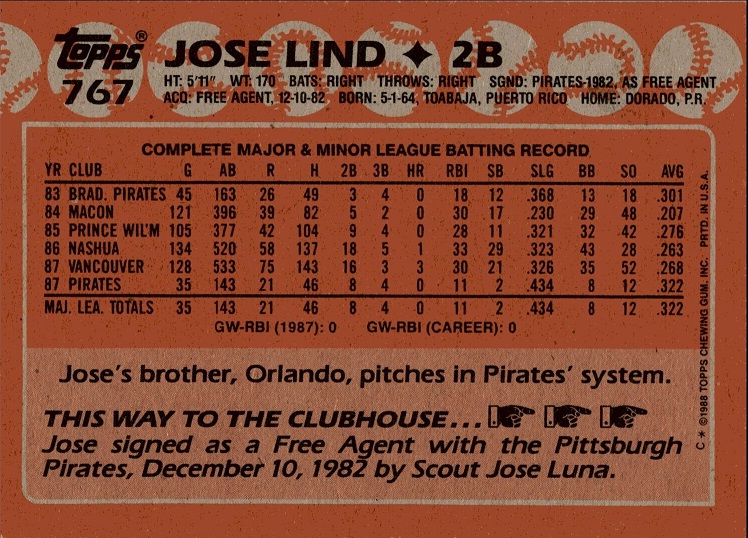 I like the way Topps used baseballs in the design here. They also used all of his pro stats, which is always appreciated. They noted his brother played for the Pirates in the minors. They didn’t note that when Lind debuted in the majors, he became part of the family members list in Pirates history. His cousin Onix Concepcion played for the 1987 Pirates as well, though they were never teammates in the majors or the minors that year. Concepcion played his final/only Pirates game in April. Lind joined the Pirates in late August.

One other thing to note here is the date that this card says he signed. I’ll note that his 1988 Donruss card also uses the same date. The reason Lind is featured here today specifically is because he’s recognized now as signing with the Pirates 40 years ago today. I don’t know which date is correct, but I left the signing in today’s history article.

If you would like to purchase this card, it is a common and you shouldn’t pay more than $2 delivered to get one. These cards are extremely common and not highly collected right now. You could grab a pile of 1,000 of these cards, throw them into a fire and it wouldn’t do a single thing for the value of the remaining cards. You’d also be better off selling those 1,000 cards, but you would not get much money for them. There are two autographed copies on Ebay right now, which you can get for $10 or $15. There’s also a Tiffany version of this card, with a glossy front, which is much harder to find and has some added value.