Today’s Card of the Day comes from the 1966 Topps set and it features Andre Rodgers, infielder for the 1965-67 Pittsburgh Pirates. He debuted in the majors in 1957, and he was recognized for 63 years as the first player from the Bahamas to make it to the majors. When Major League Baseball reclassified the Negro Leagues as Major League Baseball in December of 2020, Rodgers lost his title to Ormond Sampson, an OF/IF for four seasons between 1932 and 1941 in the Negro Leagues for four different teams. Rodgers still kept his place in Pirates history, as the only player from the Bahamas to play for the Pirates.

Rodgers was born on this date in 1934. He’s making his first appearance in our Card of the Day series. He had three choices for today’s featured card and I eliminated one of those quickly. I just looked at the 1965 Topps set yesterday. So not only is it too soon to go back to the set, his photo on that card doesn’t show him on the Pirates. Pittsburgh acquired him on December 9, 1964, which was soon enough to have him listed as being with the Pirates that year, but not soon enough to get a photo for the card. So they just used their old trick of getting a hatless photo and cropping it close to get rid of team identifiers. This 1966 Topps card is not only a nicer looking card, there’s no doubt what team he is playing for in the photo. Topps remained in their “pink Pirates” phase for this set, though it’s not as overwhelming as the 1965 set. Here’s a look at card #592 from the 1966 Topps set, featuring Andre Rodgers. 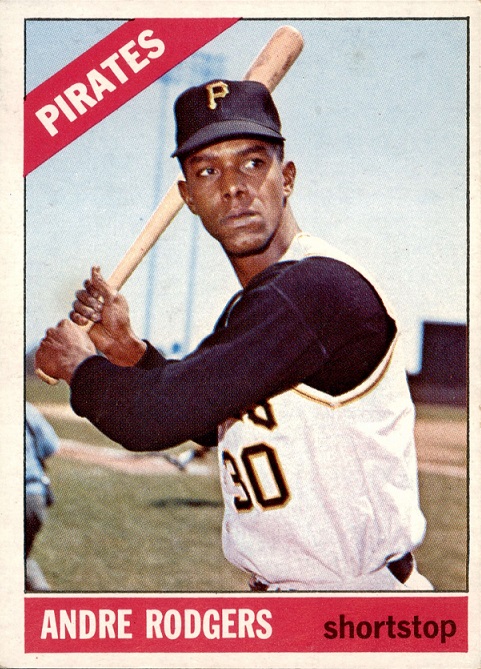 This is easily my favorite Rodgers card with the Pirates. The 1967 set design is a bit boring, but if we eliminate the set design from the equation, I’m still sticking with the 1966 photo over his 1965 and 1967 cards. I like the focused look in the staged batting photo, plus those 1965 era uniforms were great looking. The background of this photo is too good. I’m all for baseball scenes to help the card’s look, but this one has a random half person in the bottom corner and then a stray leg coming out of his sleeve. If there was ever a time for Topps to try out their bad photo editing, I think they should have tried it out here. 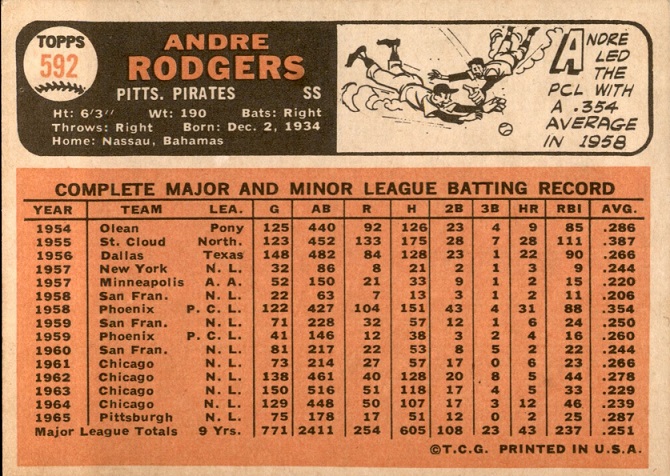 How many times do you see a Topps cartoon where Generic Gray Topps Man isn’t playing the player on the card? He’s there playing multiple bumbling Pacific Coast League players, helping Rodgers to a batting title in 1958. He won the title by seven points over Earl Averill, the son of the Hall of Famer with the same name. The top nine hitters in the league that year also included Vada Pinson, Felipe Alou and the great Willie McCovey. Topps gained some brownie points here by including all of his pro stats. I don’t think anyone would have been mad if they only went with nine years of MLB stats, but they got the entire minor league resume in there as well.

If you look in the top corner of the back (or the last line of the intro), you’ll notice that this is card #592. That makes it a high number card (also called a single print by some), which means it wasn’t printed in large quantities, so it’s harder to find than your average 1966 Topps card. The prices aren’t too high on this card, though that might have something to do with the set’s popularity, because we have covered some high priced commons from the high numbers recently. There are plenty of graded cards in the 6-8 range on Ebay right now for this card. You can get a PSA 8 for $80. A PSA 7 can be had for $50. A PSA 6 can be bought for $26 (with a best offer option). That seems like a great price because an ungraded one in the same shape will be about $15, BUT if you wait for a straight auction listing, you will probably get it cheaper. A PSA 7 recently sold for $21, and a PSA 6 was $15. A few ungraded copies sold for under $10.