Today’s Card of the Day subject is Ozzie Virgil, who had a brief career with the Pittsburgh Pirates, but he also had an important role with the team. His playing time with the Pirates consisted of 39 games during the 1965 season. Two months after the 1965 season ended, he was traded to the San Francisco Giants in a deal that brought Matty Alou to the Pirates. That turned out to be a one-sided deal in favor of the Pirates.

Virgil would be described as a fringe MLB player now, or a AAAA (Quad-A) type of player. Too good for Triple-A, but not good enough to stick in the majors over a long time. Over a 14-season stretch, he played 324 big league games in nine seasons. He’s a good depth player to have around, especially at the catcher position. He finished with a career -0.4 WAR, which over nine seasons basically means he was a replacement level player, since that rounds off to 0.0 WAR per year.

Virgil had one card with the Pirates and it qualifies as a “Pirates” card in air quotes. You will see why I say that after you check out card #571 from the 1965 Topps set. 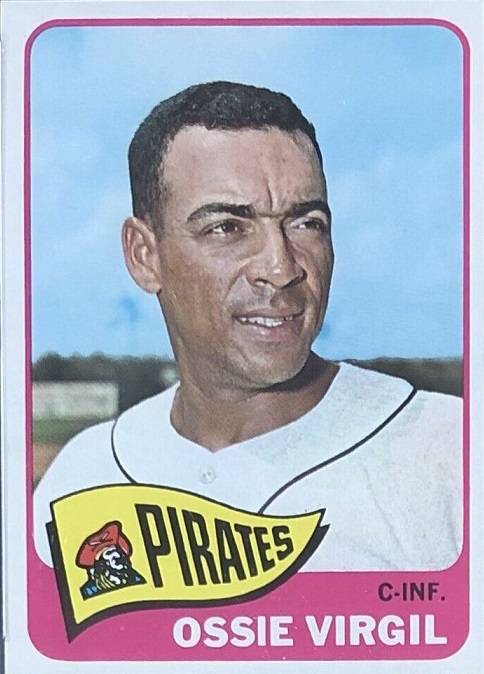 That clearly shows Virgil on a 1965 Topps card that says he is on the Pirates. However, you already know that he’s not wearing a Pirates uniform on that card. That’s some 1960s Topps chicanery going on. Take a photo of a guy without a hat, then we can crop it close to the shoulders in case he switches teams in the future. This photo appears to be him on the Detroit Tigers, where he played during the 1958, 1960 and 1961 seasons. Could it be a 1962 photo from his time with the Baltimore Orioles during Spring Training? They did have striping like that, but their jerseys also had a lot on the front across the chest that would have been showing on this card. Also, Orioles jerseys at that time had zippers, while Tigers had button up uniforms.

I hate the look of the 1965 Topps set for the Pirates except for that pennant, which is the only things that saves the front design. So instead I’ll mention the spelling of his first name. I learned today that there is no one in MLB history who actually has the first name “Ozzie”. I never put thought into until now when I looked up the spelling of his name back when he played. About 60% of the time, old writers referred to his as Ossie, while 40% used Ozzie. I didn’t look to see what he preferred, but regardless, his name is Osvaldo. Every other player you know who is called Ozzie, actually had a different first name. Many are Osvaldo, some are Oscar, some more well know Ozzies have other names. Ozzie Smith’s first name is Osborne. Ozzie Guillen is Oswaldo. Ozzie Albies is Ozhaino. I had no idea that Ozzie was always a nickname. 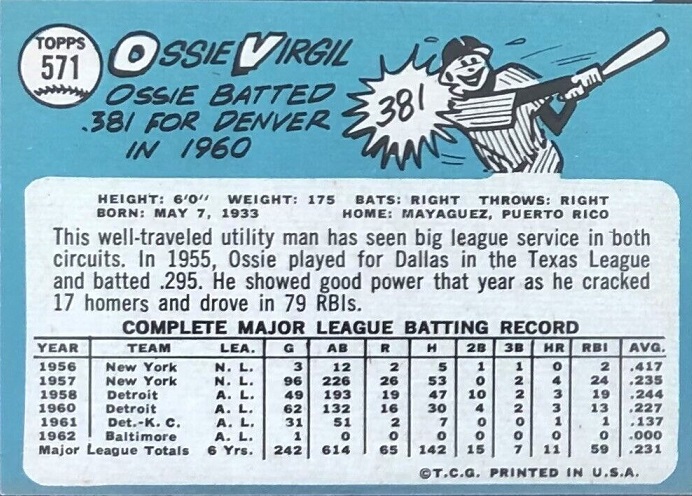 I won’t go into too much detail on the back. You can see his career stats before joining the Pirates, which lets you know that he spent all of 1963-64 in the minors. They also give some good info about his minor league exploits. Is it just me or does it look like they got a Dalmatian to play the part of Virgil in the cartoon? Interesting note about that 1960 Denver team. One of his teammates was named Ossie Alvarez, and that’s how he is known now. As for Virgil, I’m sure you could use either spelling, though I’ve seen the confusing usage of Ossie for him and Ozzie for his son, the All-Star catcher during the 1980s.

This card is not cheap, even though he’s the epitome of a common player. He’s card #571, which means he was printed in the high series, or single printed. Any time you see single printed or high numbered for cards from this era, they are going to be worth more. Virgil isn’t expensive, you just have to pay more than the usual $2-$3 for a common. There are two options for a PSA 8 around $55 each, with another one priced higher. You can get a graded/authenticated signed copy for $45 delivered (plus tax). You probably want to be around $10 for a nice raw copy. One thing that will help you while searching for his card. Try both Ozzie and Ossie (not together). You will get added results.