Today’s Card of the Day features Craig Wilson, who played first base, outfield and caught some for the 2001-06 Pittsburgh Pirates. This is his second appearance in our Card of the Day series. His first was one year today when we looked at his 2005 Donruss Diamond Kings card. I selected him that day because it was his 45th birthday. Spoiler alert: He turns 46 years old today.

Wilson was a power bat, who also excelled at getting hit. He wasn’t versatile in the field as much as he hit enough to get his bat in the lineup. He had a big 2004 season, hitting .264 with 97 runs, 35 doubles, 29 homers and 82 RBIs. That average isn’t great by 2004 standards (it’s almost elite by 2022 standards), but he also had 50 walks and led the league with 30 hit-by-pitches, so he got on base a lot. Unfortunately, that was also his worst defensive season, so his overall value was only 1.2 WAR. His time in Pittsburgh ended when he was traded to the New York Yankees, and it ended up being good timing for the Pirates. He was 29 years old at the time, but he had just 162 at-bats left in his big league career.

Today’s Card of the Day comes from the 2002 Bowman Heritage set, which is designed to look like the 1954 Bowman set. It was released late in the 2002 baseball season, which was Wilson’s first full year in the majors. He spent most of 2001 with the Pirates, but he started the year in Triple-A and he was a part-time player in the majors. Here’s a look at card #371 from the 440-card set. 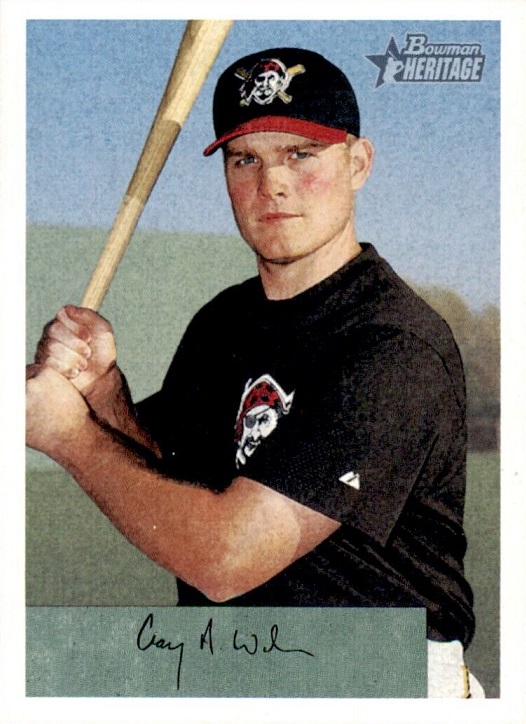 Ignore the Heritage logo in the top right corner and this is what a 1954 Bowman card looks like. It was a simple design, but more than they normally did. There is a white border around the photo, along with a box at the bottom with the player’s facsimile signature. The box is different colors throughout the set and there is no specific pattern for the team color. Anyone who remembers Wilson will realize this is an early photo of him with the team. Scroll through his cards on Ebay and you will see him with long hair and facial hair in many of the photos. Sometimes it’s one or the other, sometimes it is both. 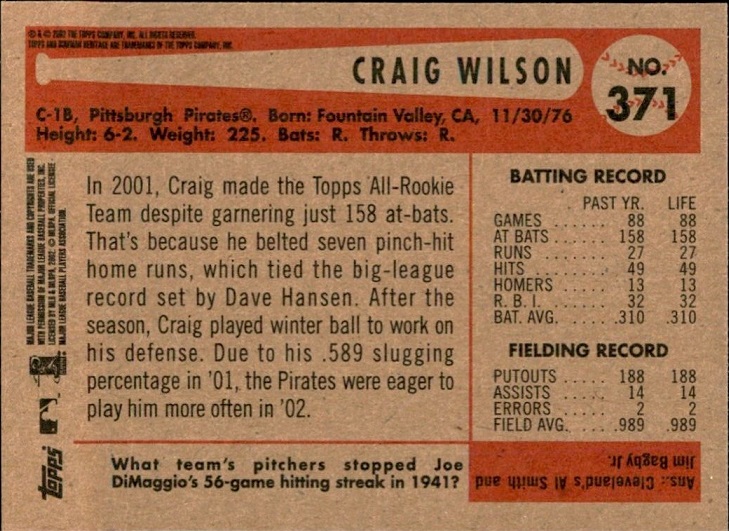 The back is also set up just like a 1954 Bowman card. They had one year of stats and career stats, which was the same set of stats for Wilson at the time. They also included fielding records. There was a nice bio section, with a really interesting first sentence. Most know that Topps put out the Bowman product at this time, but could you imagine a 1954 Bowman card mentioning Topps on the back? They were bitter enemies.

I didn’t remember that he played winter ball after the 2001 season, so I actually went back and updated his player bio on our site with that info. The stats aren’t available on his online stats, so it took a little digging to find out what he did that winter. The Pirates wanted him to get more defensive work as noted here, and they also wanted him to cut down on his strikeouts. Unfortunately for Wilson, he did so poorly in the Dominican that they released him after 16 games. That’s not odd for any foreign player in winter ball. If they do poorly, they have a very short leash.

That trivia question is one that we actually mention here because the player who stopped the streak, eventually played for the Pirates.

If you’re interested in this card, you’ll be overjoyed to find out that it can be had for a low cost on a site called Ebay. Three sellers have it under $2 delivered (plus tax). Two people have it autographed and both of them are under $10 each delivered. Not a ton of options overall, but there’s enough out there for everyone.