I’ve been anxiously waiting to get to this card. I’ve covered the 1969 Topps set recently twice, but I’m going back to it for this specific card. Pittsburgh Pirates catcher Chris Cannizzaro played 25 games during his only season with the team in 1968. He gets mentioned in our daily Pirates history three times per year. In March, we look at his trade from the Pirates to the San Diego Padres. In May, we look at his bio on his date on birth. On November 29th, we recap the trade that brought him to Pittsburgh from the Detroit Tigers, which occurred 55 years ago today.

Cannizzaro obviously had very little time to do something memorable with the Pirates. He’s more known as becoming an All-Star in 1969 with the Padres, though that had more to do with being a catcher and teams needing representation in the All-Star game. He was actually much better the next season when he posted a career best 2.3 WAR, thanks to solid defense and a .745 OPS. The Pirates had catching well covered with Manny Sanguillen and Jerry May, so Cannizarro was expendable at the time. They would have been better off not making the trade, but it gave him a chance to play regularly on an expansion team. 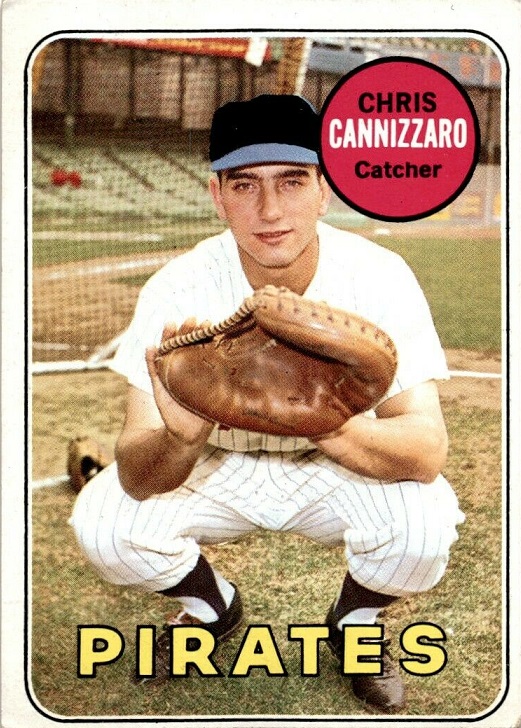 Cannizzaro played for the New York Mets before coming to the Pirates. One problem with that fact is that he last played in the majors in 1965 with the Mets. That is clearly not a Pirates uniform, but they didn’t even give any effort. They started to airbrush his hat, but they just stopped. Why did they leave the bill of the cap blue? Not only that, but look somewhat close at the airbrush job and you can see some tiny blue dots they missed, as well as an outline of the blue across the top. To cap it off (pun definitely intended), they put the name/position circle slightly over his head. That was easy to avoid, but I’m guessing they gave up on this card long before that point. This is one of the least Pirates card of a Pirates player during his time with the team. This is one of those cases where the card is so bad, it’s actually good. 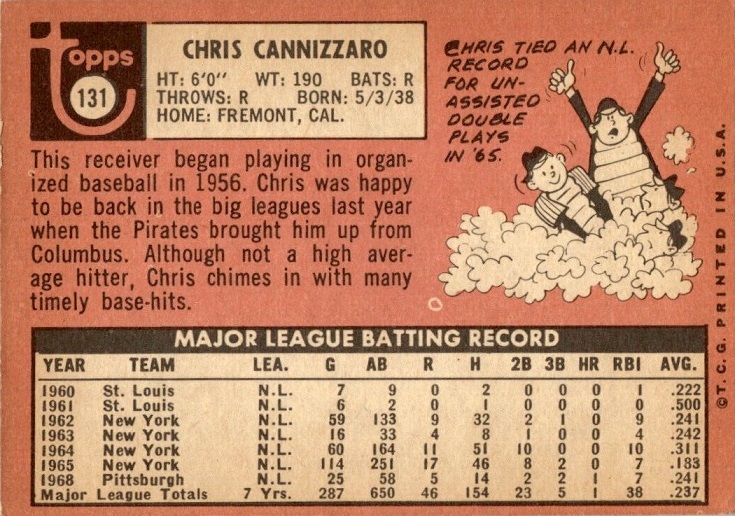 I don’t want to go into too much detail with the back and take away from the front focus. I’ll mention two things here. I think it’s funny that they start off by calling him “This receiver”. It made me think of an introduction for someone famous, where they build up to a point where a few people get the first clue, but everyone realizes who it is by the end, like “This slugger was born in Earlsboro, Oklahoma in 1940 to his mom who is part Seminole Indian… (45 seconds later)…He went on to hit 475 homers in the majors and make it to Cooperstown in 1982, say hello to Willie Stargell!”

The other thing I love is the cartoon where they didn’t even try with Generic Gray Topps Man. I think he’s playing all four parts in the cartoon to be honest. You have to love the versatility.

The description at the bottom where he’s credited with chiming in with many timely hits is easily disproved by the RBI column. You don’t bat 650 times and get a reputation for timely hits with a career total of 38 RBIs. I gave them the benefit of the doubt though and looked it up. Of those 38 RBIs, 14 came in losses and another six came in one-sided wins. I didn’t go through specifics after that point, but we are taking about 18 RBIs in games won by fewer than six runs over seven seasons. His career stats show a .589 OPS when batting in tie games. It feels like whoever wrote that didn’t know that Baseball-Reference would be a thing 40 years later, and someone who wasn’t even a thought yet in their parents’ minds would question them 53 years later.

If you’re interested in this card, you’ll be happy to know that one of the nicest ones on the planet is only $67, with a best offer option for a PSA 9. You can get a PSA 8 for under $30, and a signed copy for as low as $24. If you just have to have one, but you don’t care about condition because Topps didn’t care about the look, then you can get it for $2 from multiple sellers.