It’s been exactly one year since we feature Don Hoak here. He played third base for the 1959-62 Pittsburgh Pirates. He finished 17th in the MVP voting in 1959, then had a second place finish in the 1960 MVP voting behind teammate Dick Groat. Hoak then had his best season on offense with the 1961 Pirates. He’s making back-to-back appearances on November 28th because the Pirates traded him to the Philadelphia Phillies on November 28, 1962. Today is the 60th anniversary of that trade, which could have ended up much worse than it did for the Pirates.

This is our second article featuring the 1962 Post set. The last/first one was posted just over a year ago today when we highlighted Dick Stuart on the date of his birth. I really like these Post cards because they give you cheap alternatives to the Topps cards for Roberto Clemente. These cards were on cereal boxes, so you could pick out which players you wanted, as long as you got there before everyone got the good ones. They printed a ton of these card and a lot of them got saved too. The true value in the cards is finding them in nice shape, as I will show below. Here’s a look at card #171 from the 1962 Post set, featuring Don Hoak. 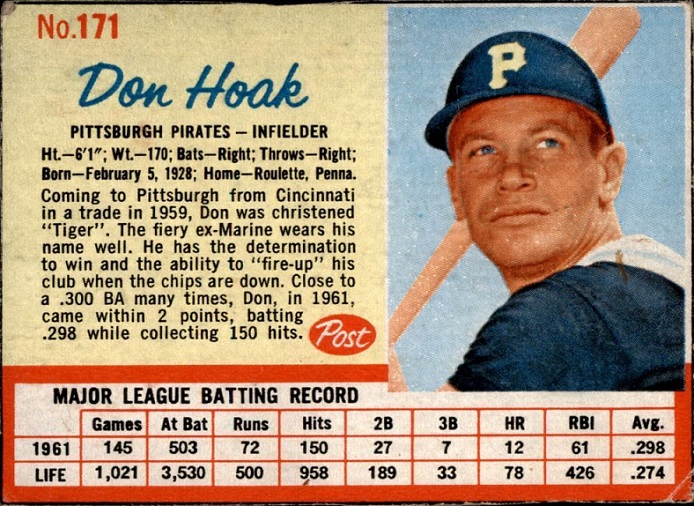 I could have picked a nice looking scan, but I wanted to highlight the condition issues with this set. At the bottom you can make out a black border under the red box. That is usually missing because it’s part of the cereal box. It was really up to the discretion of the scissor holder on where to cut these cards. If they went big, then the cards could be trimmed better at a later date, which actually would improve the value of the card if done correctly (don’t trim regular cards unless you don’t care about value). However, that original cutting idea didn’t carry over to current times, when there is a minimum size for these cards. You can see up top that some of the cutting for this particular card worked into the yellow. That wasn’t supposed to happen, but back then it really didn’t matter much. Since these cards were cut by hand, it’s tough to find two of them that look exactly alike. You were relying on the skills of people who had no idea that future value could be affected by their cutting actions.

As for the card itself, you get the stats from Hoak’s best year at the plate, along with his career stats to that point. He played another three season, though his final year (1964) was just six games. There’s a bio for him with notes about his “Tiger” nickname and his ability to fire up his teammates when the chips are down. That last sentence there makes my head hurt. I try to work with a three comma maximum unless I’m naming a bunch of things in the same sentence. They are also on a first name basis with him. I try to avoid that when writing unless it’s to differentiate between players with the same last name. If I ever get a time machine, I’m definitely going back in time to rewrite this card. Don’t ever expect me to do something important with that time machine. I have too many early baseball games to watch.

The back of this card is blank. It’s the same as the cardboard inside of a cereal box now. So we are skipping to the price section, which I sort of mentioned already. These cards are plentiful, cheap and it’s really just up to you as how much you want to spend. The worse the cut, the cheaper they are priced. You have multiple options in the $2-$3 range and some of them actually look acceptable to me. Someone has one graded PSA 8.5 for $175 or best offer. That’s a very tough grade for these cards. There are a few choices in PSA 8, including one under $100. I’ll note that there’s a Canadian version of this card that looks somewhat similar, but has some differences. The card uses both English and French. The photo is cropped slightly different. The red around the stats at the bottom isn’t there. Those are harder to find and priced slightly higher.