With nine birthdays of former Pittsburgh Pirates on November 27th, I planned on going away from the headline player today. Then I noticed that it has been over a year since Dave Giusti appeared in one of our Card of the Day articles, so he got his spot back. He was important enough in team history that he shouldn’t be going more than a year between appearances here.

For today’s Card of the Day, I picked his 1976 Topps card. I almost went with this set for the Richie Hebner card that we just posted because I’ve been using Hebner’s 1976 Topps card for photos in our articles. I actually thought I used the card a while ago before I checked his Card of the Day history. Just so the 1976 Topps set doesn’t get its feeling hurt, we take a look at it today for one of the best closers in Pirates history. Here’s card #352 from the 1976 set, featuring Dave Giusti. 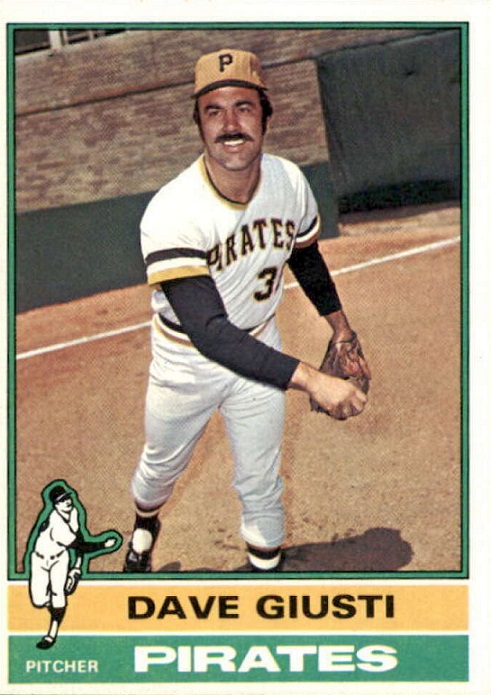 The 1976 Topps set is a rare set where I like the set more than I like the Pirates cards in the set. Usually it’s the opposite, especially with sets like 1981 Topps, where they use the team colors. For some reason, the Pirates cards in this set got a green/gold combo for their cards and it just doesn’t work well with the Pirates cards for me. There are cards I really like, such as the Al Oliver and Dave Parker cards because they have great action shots. The set as a whole really has some nice looking cards. I really hate the whole 1977-79 run of designs from Topps, so to me this is the last good looking set from the 70s.

Speaking of poses, do me a favor. Drive over to your nearest Ebay and take a scroll through photos of Topps Dave Giusti cards with the Pirates. The guy had a favorite pose for sure. You can find four cards where he’s in this follow-through staged action pose. The funny thing is that the 1976 set (much like the 1973 set we used with Hebner) has a shadow figure for each position. They must have used a photo of Giusti for the right-handed pitcher model. 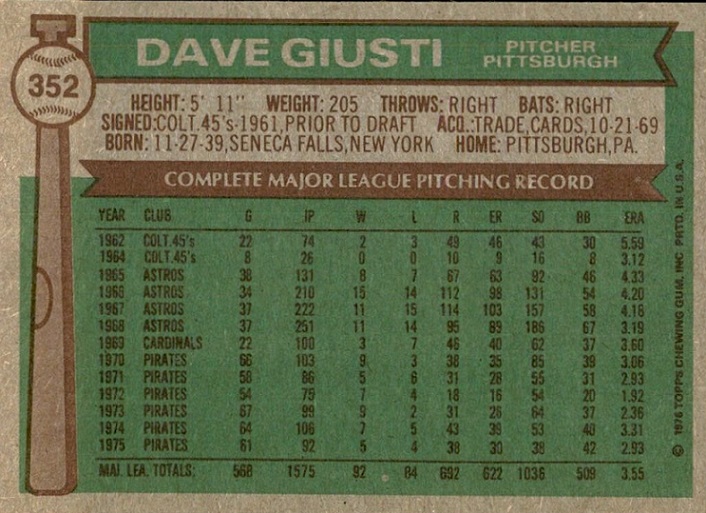 Is 46 years too late to request a do-over with the backs of these cards. I like the left side of the card with the baseball/bat combo. For some reason, this simple type of baseball equipment usage always work well for me, possibly because a lot of very old sets (100+ years) use that idea. However, what were they thinking with brown lettering/numbering on a dark green background. How much did eye doctors back in the day pay Topps to use the worst color combos to read just so they would have lifelong clients? This scan is enlarged for more detail, but in person it’s even worse. Just go to Baseball-Reference if you want to see his stats.

If you’re interested of getting a card of Giusti and you like the pose, you have numerous years to choose from. If you like the 1976 set specifically, then this is a cheap card to get, with plenty of options in the $2-$3 range. There are quite a few autographed copies available, and Giusti is from the era when the players used actual letters in their autographs, instead of whatever kindergarten nonsense current players try to pass off as autographs. You can get a nice one for $15. There aren’t any graded cards currently up on Ebay, so if you want a really nice one, you just have to check scans and probably pay a little more than $3.