Today’s Card of the Day is a player who surprisingly hasn’t been here in a solo article yet, before today obviously. Richie Hebner put in nine full seasons and two partial seasons with the Pittsburgh Pirates. He debuted in 1968 at 20 years old, and he moved on as a free agent after the 1976 season. He then returned mid-season in 1982, sticking around until the end of the 1983 season. We looked at his 1969 Topps rookie card early in the humble beginnings of our Card of the Day series. That’s a great card that he shares with Al Oliver.

Hebner shares his birthday with seven other former Pirates, including two pretty big names in Bob Walk and Bob Elliott. That’s one of the reasons he has been here just once. I’ll try not to wait another 2 1/2 years before he shows up again. I saw some interesting cards I’d like to highlight, but I settled on his 1972 Topps card. So here’s a look at card #2 from that set, featuring Richie Hebner. 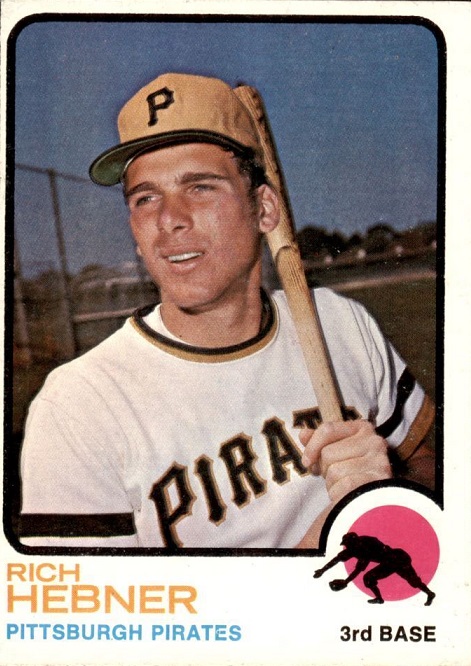 It was interesting picking out scans here. This card is plentiful on Ebay, yet it was difficult finding a good scan to use. Lots of people used crooked scans, or ones on an angle, but also the brightness of cards really differed. You could really tell when looking at the sky, as some looked like a bright blue sunny day, while others looked even darker blue than this one. I tried to go for a middle ground, yet I still ended up on a scan with a quirk. This card was miscut left-to-right. That seemed to be a theme with his cards, including one that was miscut so bad top-to-bottom that you could see another card picture frame. Just for reference on this one, you’re supposed to see a little more of the border on the left side.

The 1973 Topps set was the first year of game action shots on regular player cards. The 1972 set had In Action cards, plus the postseason subset had game shots, but 1973 was the first year that you could find action shots for regular players. However, Topps also went with a lot of Spring Training photos like you see here. Since he’s wearing a home jersey, my guess is that was taken in Bradenton.

The 1973 set also had shadow figures of players for each position in the bottom right corner. Hebner played third base, so you get this particular shadow figure reaching for a ball. I like the ones they use for shortstop and catcher the most. I’ll note that I always call him Richie, but Topps went with Rich. 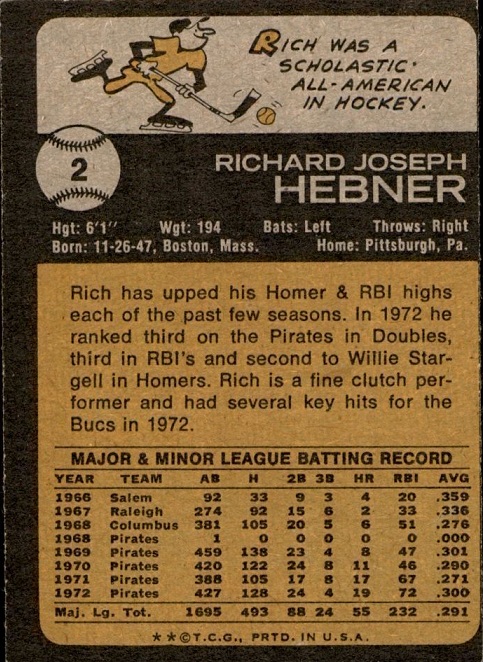 The back shows off the miscut better than the front. You can see how much of the black border shows on the one side compared to the other. It doesn’t have to be an even amount of black on each side, but this is way off. As you can see with 1973 Topps, they picked an awful color combo and rolled with it. At least it’s not the dark green from other years. You can actually read these stats here, even if the player had a long career. Topps included all of his minor league stats, which is greatly appreciated, but they only had seven categories of stats. They got rid of games and runs, which were on the 1972 cards. Those cards also told you the league for each team, so it was really three rows that were eliminated from one year to the next. Generic Gray Topps Man makes an appearance as a hockey player using a baseball, which is fun.

If you’re interested in this card, Ebay has a ton of options. If you want high grade, both graded and ungraded, that’s available. There are autographed cards as well, and Hebner has an outstanding autograph, so those cards have some great eye appeal. There’s a pricey PSA 9 for $130 delivered. A PSA 7 can be had for $33, though it has a best offer option as well. For $12-$15, there are numerous signed cards, including ones signed in red, blue and black, reminding me of current autographs that use certain colors for limited quantity autographs. If you just want a Hebner card, ungraded, unsigned, corner dings are okay, you can get one from many people for $3 delivered.