Today’s Card of the Day features Pittsburgh Pirates pitcher Jim Waugh, who threw a total of 142.2 innings in the majors during the 1952-53 seasons. They all came with the Pirates, and that time was not only his entire big league career, he did all of that work before his 20th birthday. He was one of the youngest players in team history when he debuted on April 19, 1952. At the time, he was 18 years, four months and 24 days old. His career was sidetracked by an arm injury during the 1953 season, and he never really came close to returning to the majors before his career wrapped up when he was still 22 years old.

Waugh joined the Pirates at the right time. The 1952 Pirates were awful, finishing with a 42-112 record. He had an outstanding Spring Training in 1952 and earned his Opening Day spot. His time with the Pirates was four separate stints over two seasons. He was with the Pirates at the start and end of both 1952 and 1953, while spending the middle of each year in the minors. You can read more about him in our daily This Date in Pittsburgh Pirates History article from today. That’s because he was born on this date in 1933. He doesn’t have many card choices due to his small career. In fact, it’s today’s card choice and another Topps card based off of this card, which was released 38 years later. Here’s a look at card #178 from the 1953 Topps set, featuring right-handed pitcher Jim Waugh. 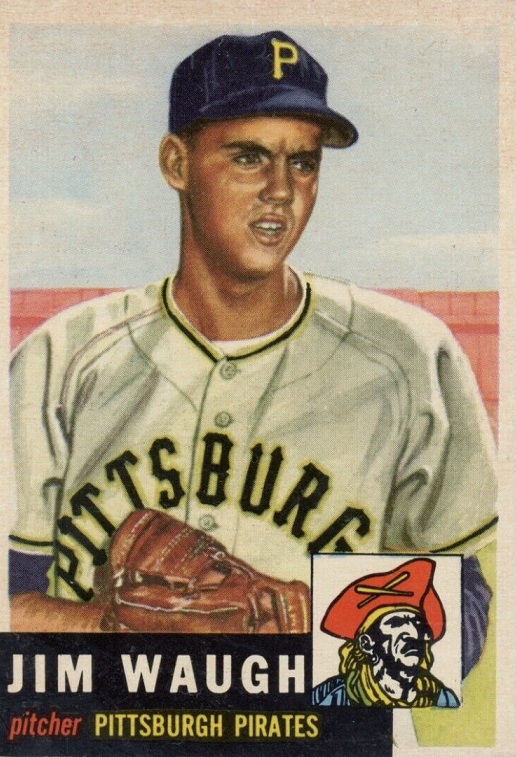 The 1953 set is the second major set from Topps. The 1952 set is iconic, while the 1953 set is also still very popular. Topps liked this design so much that they based their current Living Set design off of this set. I’m a big fan of this set, with my only issue being focused on some of the cards that don’t have the best artwork. I can overlook that for the few cards though and enjoy the overall set. The ultra-popular T206 set, which has been collected since 1909, has a handful of cards with some very bad artwork, but those cards don’t take away from the set. They stand out because of the overall greatness of the set, but they still fit into the set just the same.

I like the work done here, with Topps getting the uniform colors correct…I think. The Pirates switched to black & gold in 1948, and someone at Topps missed that memo for the 1952 set. The Pirates colors are all over the map in that set. Some of their 1953 cards also look like they have navy blue hats, while one even has a white “P” on the hat. The “I think” part of the first sentence is that the sleeves here definitely look lighter than the jersey color, but that’s not necessarily a mistake. There’s no reason he couldn’t have a shirt with navy blue sleeves under the jersey. The artwork for this set is based off of real photos, but I couldn’t find the matching one for this picture. Waugh was just 18 years old when the photo was taken.

My favorite part about this set is that they used team colors in the design for the first time, plus that old logo is outstanding. I’d love to see the Pirates go back to something similar now. 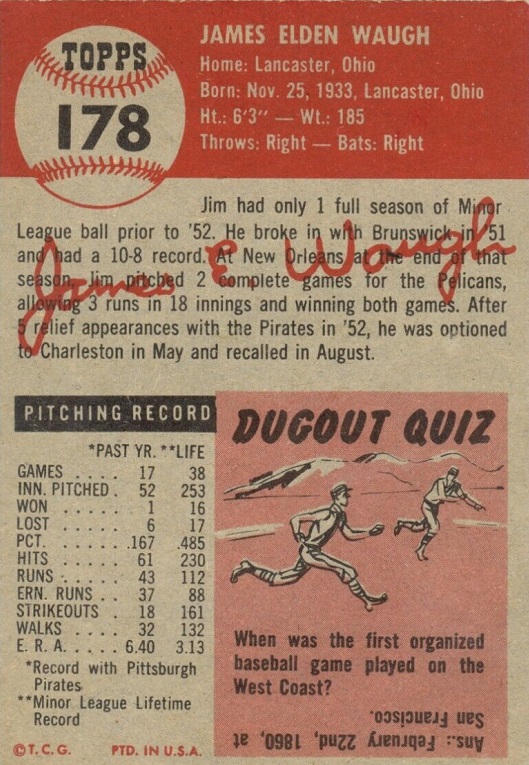 I really like what Topps decided to do here with the stats. He played in the majors and minors in 1952, but they decided to just show his big league stats there, then his full minor league career stats in the “life” column. That Dugout Quiz question is an interesting one and I don’t think I’ve ever heard that answer before. Doing a little research, the answer seems to be incorrect, but based on an actual event that is believed to be the start of west coast baseball. The sport was definitely played out west before 1860, but there can be guidelines put on the word “organized” for baseball purposes that make the game a first of sorts. It’s an interesting subject if you want to do more reading, Google “1859 west coast baseball”.

If you’re interested in getting this card, it trades heavily on Ebay, so you should have no trouble finding it in whatever grade you want, unless you’re talking PSA 9/10, then you’ll have some trouble and pay a lot once you do find what you’re looking for. If you just want a decent ungraded copy, you’ll probably want to be around $10 delivered, but you can get well loved cards for as low as $4 each. A PSA 8 of this card recently ended for $190, while two PSA 7’s sold for $90 and $45, which is quite a difference for the same grade from the same grading company.