Exactly one year ago today, we took a look at the 1953 Bowman card of Bob Friend. That was special for a few reasons, as it was the first look at that set, the first solo article appearance for Friend, and he was born on this date in 1930. He has appeared in another Card of the Day article with some teammates, but this is now his second solo article. It’s a good day for it today as well. Why wouldn’t you celebrate Thanksgiving with a Card of the Day about someone with the last name Friend. Until someone named Bob Family joins the Pittsburgh Pirates, who better to spend some of your Thanksgiving with than one of the great all-time Pirates pitchers.

I selected today’s Card of the Day just by scrolling Ebay until I saw something I wanted to feature. I think this card has a nice look, and it’s a bit different than your typical 1959 Topps card, so here’s a look at card #569 from the 1959 Topps set, featuring Bob Friend on his The Sporting News All-Star card. 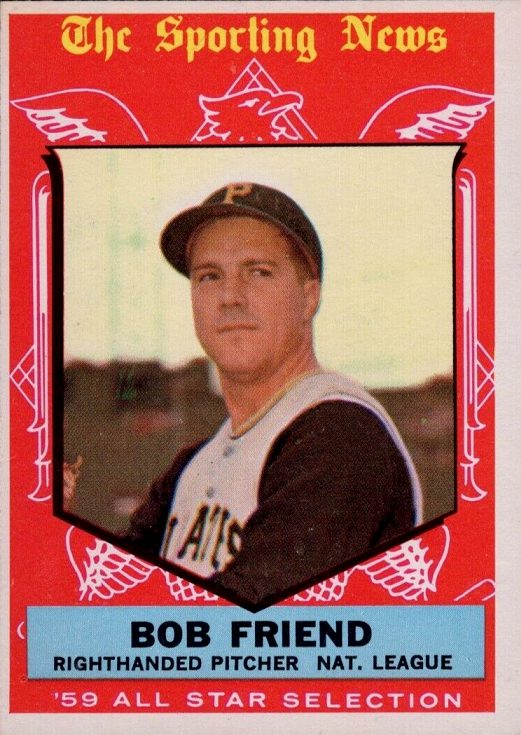 The 1959 Topps set is easy to identify if you can remember that Topps went with circular photos for the players that year. The border around the circle had many options for colors and it wasn’t organized by team either, though a large group of the Pirates players ended up with the yellow border around the photo. The color for the player’s name also had a few options, white, black or red. The Sporting News All-Star cards were much more organized as a group. The American League players had a blue border and the National League players had red borders.

The box for the name was blue for the NL players and the writing was black. Topps threw a bit of a curve here, as the AL players had yellow boxes and the position/league in black, but their names were in red. Not sure why the NL didn’t get two colors for the writing. You’re also notice that the shape around the photo clearly isn’t a circle, giving these cards a much different look than the regular card from the set. Around the photo frame, you can see a design of sorts. That’s the NL symbol, with about 80% of it covered up.

This photo of Friend has two things of note to quickly mention. You can see he was wearing a batting helmet, which the Pirates did for all of their players for a time in the 1950s. You can also see a bit of green in the photo to the left of his face. I’m not sure why Topps did it, but they used to poorly airbrush stuff out of the photo backgrounds. So you could still see the outline of whatever they decided to get rid of in some photos. A lot of times it blends into the background, but once you see it, you can’t unsee it. 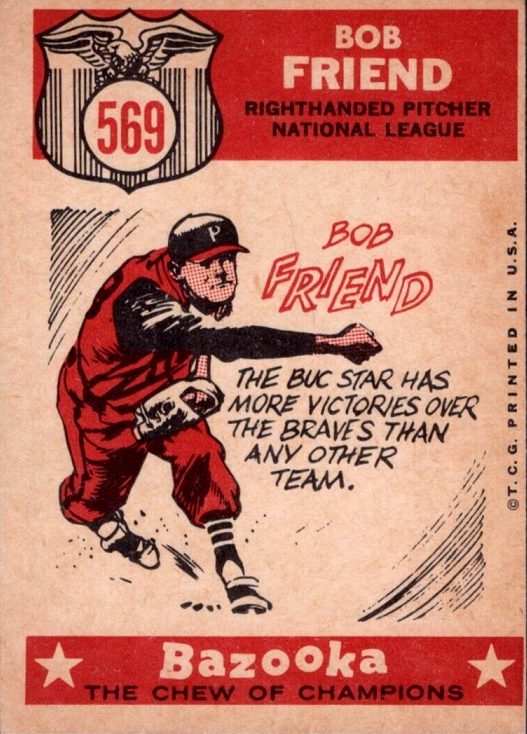 The back looks like it gives you a better look at the NL logo in the top left, but that’s actually the eagle from The Sporting News logo from the time. There’s not much here as far as player info, other than he did well against the Milwaukee Braves. They don’t specifically say Milwaukee, but it’s true. He went 2-5 against the Braves while they were still in Boston. He then had a 28-26 record against them in Milwaukee, and he was out of the majors before they moved to Atlanta. His career stats show he had more wins versus the Braves than anyone else, though he also had his most appearances and innings against them as well.

It’s interesting that the front names The Sporting News, but the back clearly looks like it is an ad for Bazooka, “The Chew of Champions”. As far as I can tell, that’s not a slogan they ran with at the time. A Google search for that specific phrase came up with mentions of these 1959 Topps cards, and that’s it.

If you’re interested in this card, you have a ton of options, graded, low grade, autographed. Friend passed away not long ago, but he also signed a lot. The most expensive card on Ebay is a PSA 8 for $200, with a best offer option. A PSA 7 has an $84 asking price, and it too has an offer option. The autographed versions are priced as high as $60, but you can get an authenticated one around $20-$30 cheaper. If you want to trust your own judgement by comparison, then you can get signed ones for around $20 as well. If you just want an ungraded, collector’s grade copy, you can buy one for around $6 delivered.