This has to be one of the biggest coincidences I’ve had while picking cards for this series and I swear there was zero planning. I actually found out this fact after I already started this article.

This is the second time we are using a 1992 Donruss card. The first one was Barry Bonds, and that article happened exactly one year ago today. I used Bonds that day because the former Pittsburgh Pirates players born on November 23rd didn’t give me any real options to match up the card to the history. So I randomly picked Bonds and landed on that card. You can read in that article why I used him.

I sort of did the same thing today, except I pulled Al Martin’s name from tomorrow’s daily history article. He was born on November 24th, but he is easily the second most famous Pirates player born on that date. You’ll see tomorrow’s article/Card of the Day choices (don’t skip ahead!) and find out why Martin was the player who got moved up. I just did something similar two weeks ago with Hall of Famers Pie Traynor and Rabbit Maranville being born on the same date.

I got to this Martin card just by scrolling Ebay until I found something I liked, landing on the 1992 Donruss Rookies set. It’s actually “The Rookies”, but that looked odd in the title, so I did a little grammatical editing. From now on though, It’s The Rookies. So now we take our second look at a 1992 Donruss product on the one-year anniversary of our first look. Here’s card #68 from The Rookies set, featuring Pirates outfielder Al Martin 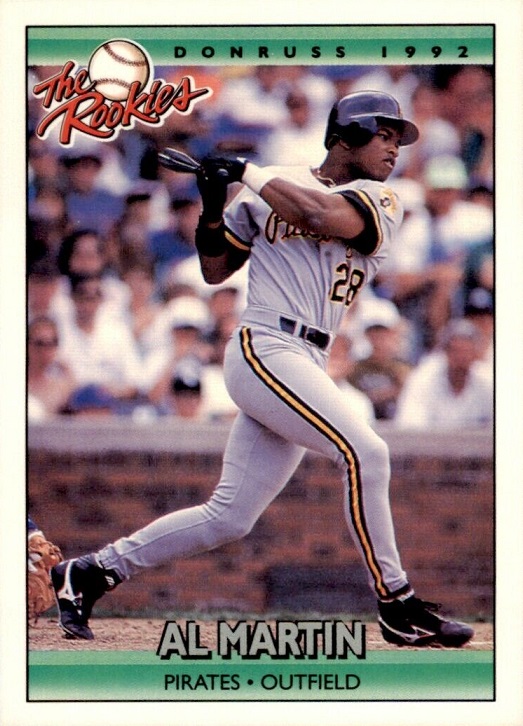 This set has the same basic look/setup as the regular 1992 Donruss set, except for two easy to tell differences. The green bands that go left to right across the top and bottom are both blue in the regular set. The other one is much more obvious. The set logo in the top left is unique to this set. The regular set has nothing there.

Martin debuted in the majors on July 28, 1992, in the middle of the third straight National League East pennant for the Pirates. The photo here is from a road game at Wrigley Field. He played five of his 12 games that season at Wrigley Field, so you figure that it would be hard to narrow this down anymore than one of those games. However, I can tell you the at-bat, with a little help from old photos and some luck.

Martin played five games, but he only batted twice against the Cubs. He pinch-hit in both his debut and his second game on July 29th. The Cubs used two different catchers those days, Rick Wilkins and Joe Girardi. You can’t actually see the catcher here, but you don’t need to see him, you just need to see the glove. More importantly, the batting glove. Wilkins didn’t use a batting glove under his catcher’s mitt, and he didn’t keep his index finger outside the glove either, but Girardi did both. You can see the white batting glove and index finger there, letting you know that this is Girardi, as confirmed by looking at his cards from that year. This is Martin’s second career at-bat and he struck out. 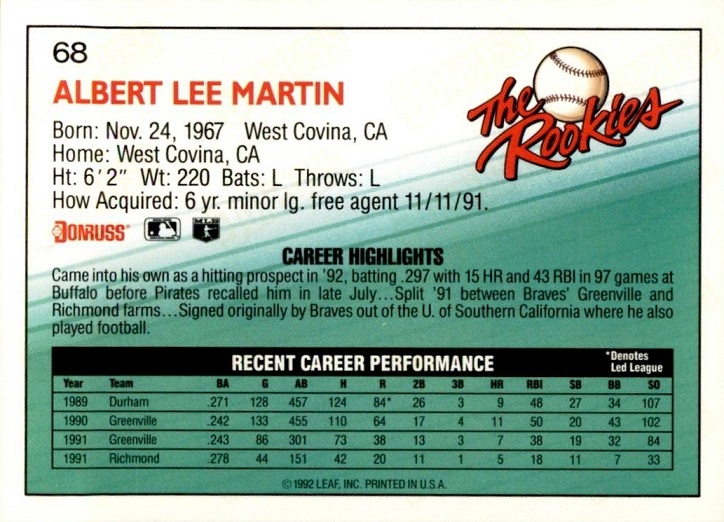 While the fronts kept the same general look of the 1992 Donruss set, the two sets differ a lot when it comes to the back. The regular set had a second photo of the player. The bio info/career highlights went down the right side of the card and the stats only took up the other 3/4 across the bottom. Besides the obvious The Rookies logo being different, the regular set had a white background, so that background is a huge difference between the sets.

If you’re interested in getting this card, you’ll be happy to know that it’s cheap and easy to find. Don’t pay more than $3 delivered total including tax. You have options under that price. These cards were part of a set consisting of 132 cards. They were sold in packs of 12 card, with 36 packs to a box. If you bought a box of these, you probably got the whole set, as well as 300 doubles. So yeah, they are easy to find and cheap because of that distribution.