Today’s Card of the Day features a player who only has one card, though there are three variations to the cards, so maybe I’ll feature him here again. John Morlan played his entire pro career with the Pittsburgh Pirates. He was drafted in 1969 and played until early 1977. His big league career consisted of 2 1/2 months in 1973, and a full season in 1974. Unknown at the time that this 1975 Topps card came out was that his big league career was over. He did decent in a middle relief type of role, but his 4.29 ERA in 1974 was the highest among all Pirates pitchers who pitched at least 40 innings. An off-season surgery after 1974 set him back a bit and he never got another chance. Morlan turns 75 today, so he’s the star of our daily show. Here’s a look at card #651 from the 1975 Topps set. 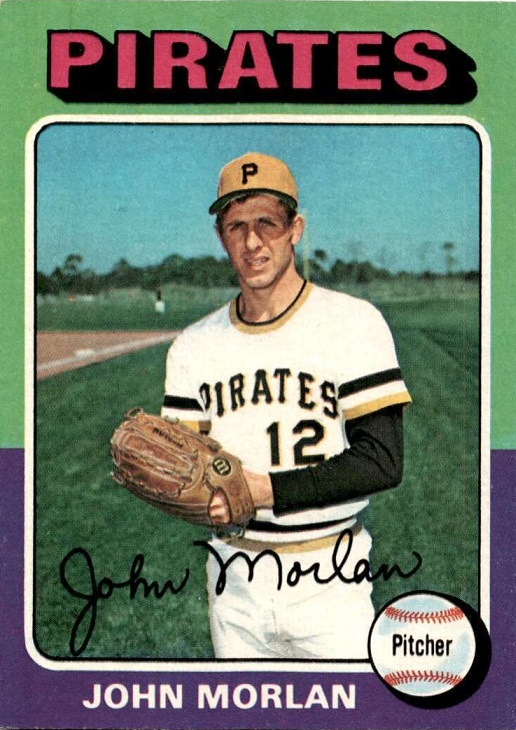 Just yesterday I was talking about a set of cards that people either love or hate, and very few people are middle ground. This definitely qualifies as another set with those splits. With a nod to the 1972 Topps set, I don’t think any other set screams the 1970s more than the 1975 Topps set. There’s not much rhyme or reason to the set, just different colors and no pattern of who got those colors. Why would you use purple and green borders with the team name in red for the Pirates? They don’t know the answer to that either, so they tried other color combos that look awful or out of place too. You can find the Pirates name written in orange, pink, blue and yellow as well. As for border combos, there are too many to name, but I can’t go without naming green and green borders on the cards of Willie Stargell, Dave Parker, Paul Popovich, Manny Sanguillen and Al Oliver. How did that happen? It was like they gave up after the brown and orange for Duffy Dyer and realized they went too far.

I hope John Morlan is in the camp of those who love the look of the 1975 Topps set, since that’s all there is for him. I didn’t do any exhaustive search, but I don’t believe he has any minor league cards. The only thing similar I saw was a picture pack 8×10 photo that the Pirates released, which is a black and white photo, with white borders and the player’s name across the bottom. 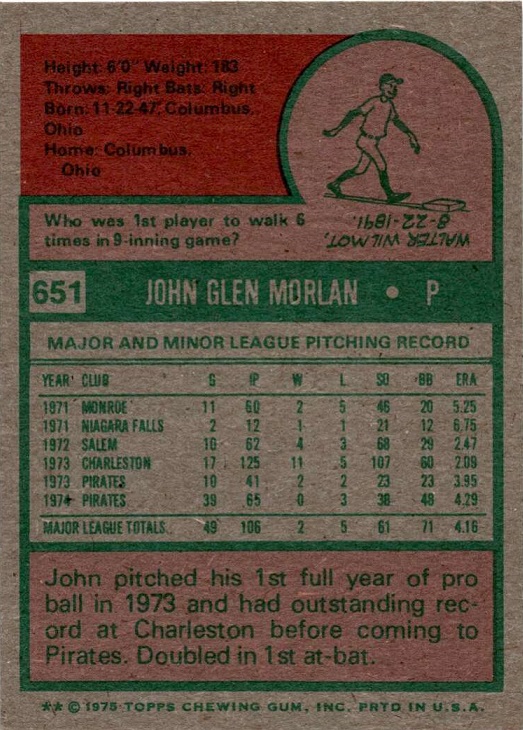 You have to love the Christmas color back idea of the 1975 cards, even if they totally missed by making the background color a dark gray, which makes it hard to read the green writing. You’re looking at this card and saying, either Topps left off two years of stats for no reason or John lied to us about when he started. I’m disappointed in you. Clearly you didn’t read his updated/extended bio in our daily history article today. Morlan did begin in 1969, but he was an outfielder for his first two seasons. It would have been tough for Topps to including hitting and pitching stats, especially since pitchers hit in the minors back then, so he still got at-bats after 1970. What they could have done instead (based on some other examples over the years) is listed his 1969-70 teams and put “did not pitch” in the stats section. It tells you that he played those years, and then you can safely assume that he was a hitter during that time.

If you’re interested in this card, you do have three options and they are all about the same price. The regular Topps card is what you see above. Topps also printed mini sets in 1975, which are shorter/thinner than the regular card size. They weren’t printed in a high quantity similar to that of the regular cards, but they’re not rare either. Then there’s the Canadian cousin of Topps, the O-Pee-Chee card. It’s the toughest to find of the three, but not as popular, so the prices aren’t really affected. That means you can get any of the three for around $2-$3 each delivered. The highest priced one on Ebay right now is a PSA 9 mini for $500, with a best offer. In comparison, a PSA 8 regular card is $40 or best offer, and a completed PSA 9 for a regular card recently went for $120. So that price is very high. You have plenty of choices in the $3 area.