Today’s Card of the Day is the first appearance in this series for Hall of Famer Freddie Lindstrom, who spent the 1933-34 seasons with the Pittsburgh Pirates. As I type this article up, I’m just finding out that he is making his first appearance, and today’s card is to blame for my oversight.

When I need scans of players for non-Card of the Day articles, I occasionally use old cards if they provide good photos of the player in a Pirates uniform. I did that with Lindstrom more than two years ago, but I’ve seen the scan enough times that I thought it was from a Card of the Day article. Time to rectify my mistake by taking a look at the 1933 DeLong card of Lindstrom. This is just the second appearance of this set in our almost daily Card of the Day series for good reason (details below). The debut of the set featured Pirates great Pie Traynor, way back in February of 2021.

Lindstrom doesn’t have a lot of card choices showing him on the Pirates. I could have used the more popular 1933 Goudey set, but I decided it was time to go back to the DeLong set. These cards are just strange to me. It’s a set that collectors either love or hate, and not many people fall in between. Hate is a strong word, so I’ll use it and say I hate this set. Okay, not really, but I don’t think the idea they had works well. Here’s a look at the 1933 DeLong card of Freddie Lindstrom. 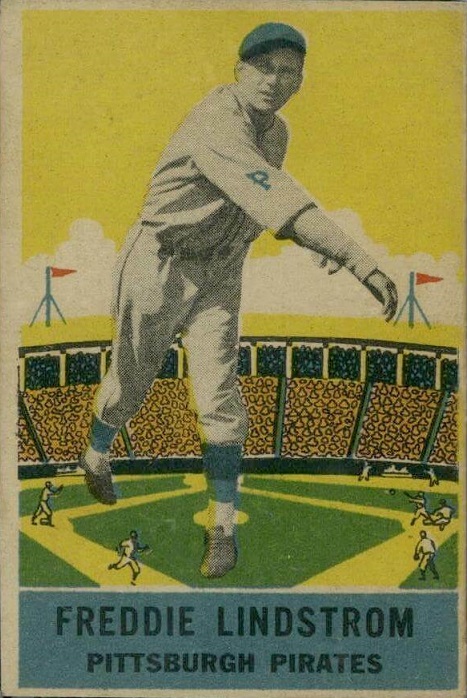 The photo of Lindstrom alone wouldn’t be too bad, but the odd coloring along with the boring look of the box with his name/team and small white borders, would still make this bland card for me. What really throws me off here is that they decided to put the players in the middle of a baseball stadium and put a baseball scene around them that doesn’t acknowledge that a giant baseball player is right in the middle of the action. Maybe if the little players had looks of horror and amazement, I would appreciate the humor in the scene. It would also work if only the players on the New York Giants were big and the rest of the players in the set were regular size. Instead, they are just playing a game in front of a stadium full of blob looking creatures in the stands, ambivalent to their impending demise.

The cards all have a one-color sky in three possible colors, and all have clouds at the bottom of the sky/top of the stadium. The blue sky cards look interesting and scientifically correct. I’m not sure about the yellow ones, but let’s go with it being a very sunny day. Then the rest of the cards have a red sky that clearly doesn’t look good, like the impending doom of a giant baseball player stomping around a full stadium. There are 24 cards in the set and Lindstrom and Traynor are the only two Pirates, so we might not feature the set here again. I say might because Hall of Famers Kiki Cuyler, Chuck Klein and Rabbit Maranville are all in the set, the all played for the Pirates, and they all have limited cards available. If I want to keep using them here, I’m going to have to stretch the rules occasionally. So who knows, maybe the set shows up again at some point. 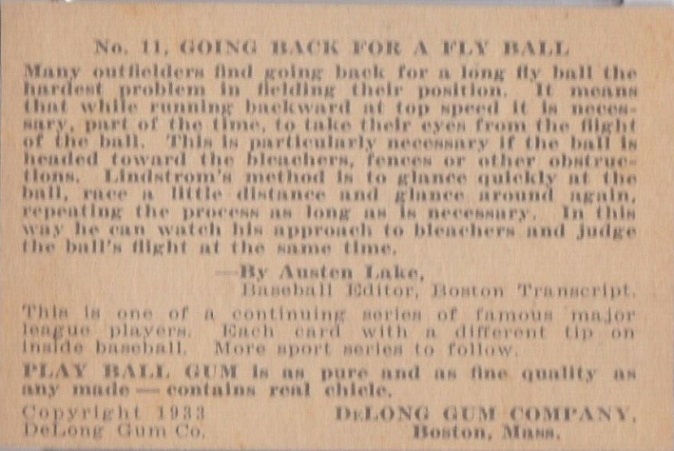 Sorry that this scan is a little blurry, but it was in a graded holder. Every other scan I saw had back damage or a glare that was blocking out some words. Anyway, the backs don’t really have anything to do with the player other than tips for playing the game are loosely tied into the player on the front. The bottom of the card is an ad for DeLong Gum Company. I read the bottom part where it said their gum “contains real chicle” and I said to myself, isn’t chicle just gum? So I looked it up and it is gum. So basically, their gum contains gum. Good to know.

Despite these cards having a limited audience, they aren’t easy to find, so the price is affordable. It’s a set of 24 players and 15 of them are in the Hall of Fame, so some collectors look at it as a set that can be completed and it has a lot of player appeal. Lindstrom cards have ended in the last three months on Ebay between $135 for an ungraded copy, to $700 for a PSA 6. There are four currently on Ebay and they range from $99 for a copy that looks like a giant Freddie Lindstrom stepped on the card with his spikes repeatedly, to $1,320 for a PSA 6, which is $620 more than what it recently ended at in that grade. In between, there are two low grade copies for $250 and $215.