It hasn’t been that long since we looked at a 1962 Topps Rookie Parade card. That last one had three outfielders who played for the Pittsburgh Pirates, along with a fourth who had ties to the team. I usually don’t like going back to the same set so quickly, but I’m making an exception here because it’s the only Pirates card available for pitcher Jack Lamabe.

The Pirates and Boston Red Sox hooked up on a four-player trade on this date in 1962, with two men going each way. The deal was headlined by Dick Stuart, though catcher Jim Pagliaroni ended up having a lot more value than anyone else in the deal. Lamabe was also in the deal, going to Boston, while the Pirates received pitcher Don Schwall. Pagliaroni, Schwall and Stuart have all been featured here in the past, so now it’s time to add Lamabe to the list in what will be his only appearance in the series. As an added bonus, this also happens to be the rookie card of Pirates pitching great Bob Veale. Let’s take a look at those two and the other three players on the card. 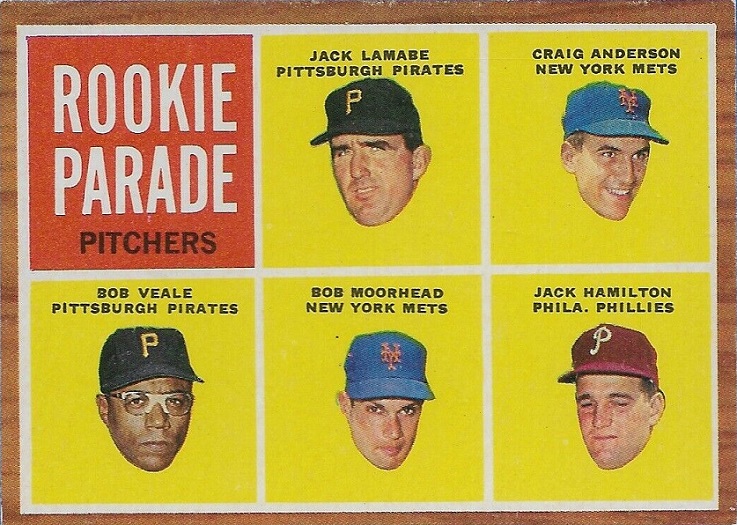 I’m not going to stay too long on the front of this card. I just talked about how creepy these floating head cards are in the outfielders article. I also noted how all of the yellow here took away from the greatness of the 1962 Topps set design. I have to mention the player faces before we move to the back. Veale looks mad that he’s a floating head, while Craig Anderson looks way too happy about it. Jack Hamilton looks like he misses his body, while I think Lamabe has the best reaction. He looks like he’s thinking “You didn’t think this through, did you?”. Bob Moorhead just looks like a kid in school who is trying to hide the fact that he has gum in his mouth. 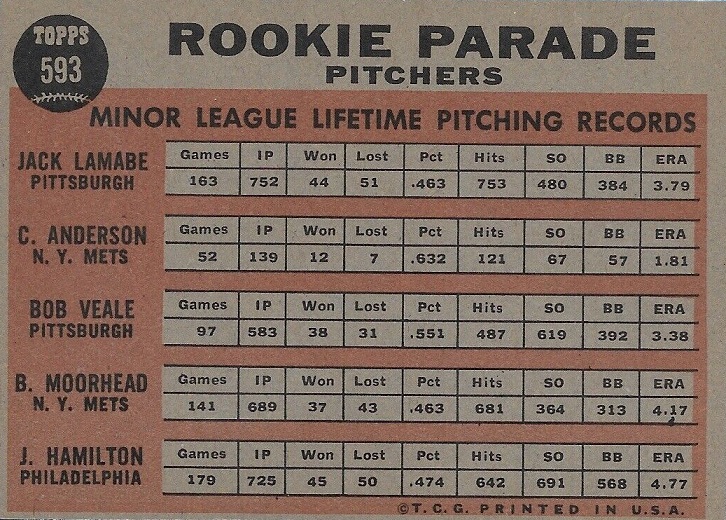 These backs made it hard to scout the player. You’ve got nothing but the name and career stats. What these tell you is that everyone but Anderson put in a decent amount of minor league time. Anderson appears to be the best player, but the low strikeout rate is a little bit of a red flag. Veale has a high strikeout rate, the second lowest ERA, but that’s also a lot of walks. We know how Veale turned out, so it’s hard to eliminate that thought and just look at the numbers. This definitely doesn’t look like a great group of prospects, so let’s see how they turned out. Here they are sorted by career WAR:

As you can see, those are pretty bad results. I knew who Craig Anderson was because he took one of the chin as a member of the awful 1962 New York Mets, but I didn’t know that he already had big league experience before this card came out. He not only had limited minor league time, he pitched 25 big league games in 1961 for the St Louis Cardinals. He wouldn’t even be a rookie by today’s standards due to time spent on the active roster. Moorhead also pitched for the 1962 Mets, then he pitched just 14.1 innings in the majors after that season. Hamilton actually put in a decent amount of big league time to get to that low WAR number. I know about him from collecting cards, but I didn’t know about the negative results over eight seasons and 611.2 innings pitched.

Veale is one of the greatest strikeout pitchers in Pirates history, and you can make a case for him being the best. He was a two-time All-Star who was effectively wild, four times leading the league in walks, while compiling the second most strikeouts in Pirates history. Lamabe pitched just one season for the Pirates, posting a 2.88 ERA in 78 innings over 46 relief appearances in 1962. That season was worth 0.8 pitching WAR, so you can see by that overall WAR that the Pirates moved on from him at the right time.

If you’re interested in this card, it’s a high number card, which means it is harder to find because it was printed in smaller quantities, and that in turn drives the price. The cheapest buy-it-now auction on Ebay right now is $100. There are only 12 auctions listed right now, with one being a straight auction listing that will be done before you read this article. This card goes much cheaper in straight auction listings, so it is best to be patient. Plenty have ended in lower-mid grades for under $50.