I was a bit torn about using today’s  Card of the Day selection. I’m sure it will conjure up some bad memories for some people. My parents were still a handful of years away from even meeting before this card came out in 1971, reminding people that game two of the 1970 NLCS didn’t go so well for the Pittsburgh Pirates, and Bobby Tolan of the Cincinnati Reds was the difference in the game. If this card ruins your day, I apologize in advance. I picked it because Tolan turns 77 years old today and he played for the Pirates during the 1977 season. The card also includes a photo of Manny Sanguillen, and who doesn’t love Manny Sanguillen. It’s also from a great set.

As I said, I was torn. Bad memory, but there are good things as well, and Tolan doesn’t have any cards from his Pirates days. I promise to put a Pirates spin on things in the card description. So here’s a look at card #200 from the 1971 Topps set. 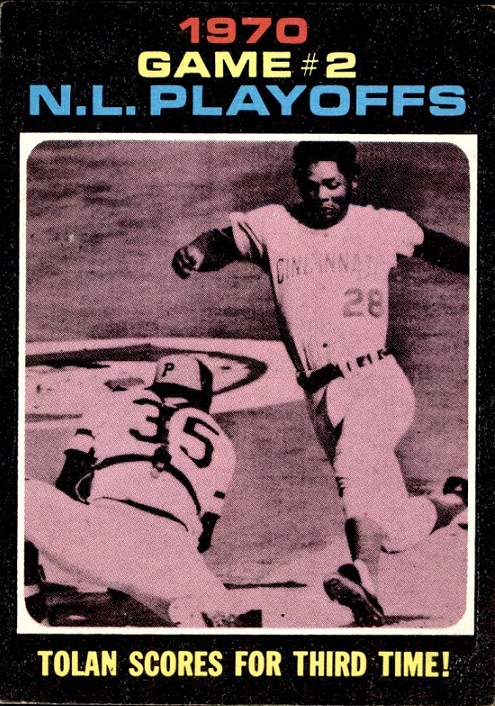 The Pirates and Reds played a best-of-three NLCS series in 1970 and I’m not sure what happened, but a year later the Pirates won the World Series and the Reds lost the 1970 World Series to the Baltimore Orioles. Once the mighty Orioles took care of the meager Reds, the Pirates decided to show them how it was done.  The 1971 Topps set had a great look with the black borders, but these playoff cards were a bit odd, using tinted black/purple and white photos. The regular player cards in the set used normal color photos of the players. It’s interesting to note that when the Pirates did what the Reds couldn’t do, Topps used color photos for the playoff subset in 1972.

There’s a nice action shot of Manny Sanguillen making the play at home plate. I’m sure Tolan was out and the ump just missed the call, but what can you do now.

Did I mention that the Pirates won the World Series in 1971? 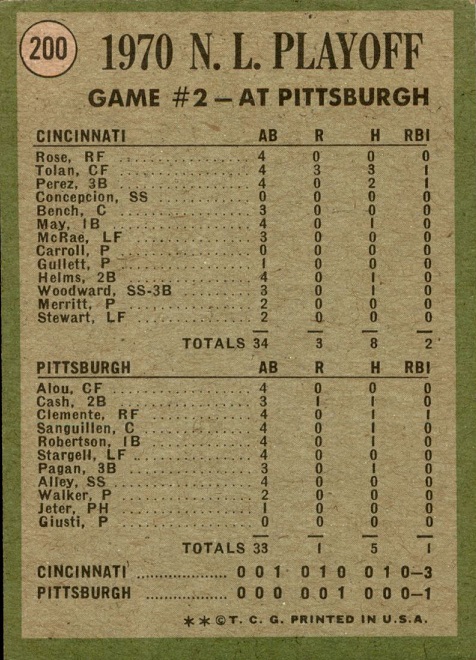 I like the back of these playoff cards from Topps because they included a somewhat abbreviated boxscore. I think it’s better than a description of the game, which would have to be much more abbreviated to fit on the back of a card. You at least see how all of the batters did with this boxscore, but the pitchers don’t matter as much I guess. The Pirates scored their run on a Roberto Clemente single in the sixth inning that scored Dave Cash. Other stuff happened, none of it important.

Each team had two Hall of Famers in this game. I almost wrote down three for the Reds because Pete Rose just has the feel of a Hall of Famer. I’m okay with him going in. I’d rather put in someone like him than someone like Todd Helton, who might go in soon despite having multiple DUI arrests and a leaving the scene of an accident on his record (and who knows how many times he didn’t get caught). There’s really not a comparison between the two situations, yet baseball thinks the exact opposite of common sense. PS Don’t drink and drive.

19 Nov at 12:01 am
Card of the Day
Bobby Tolan, Featured, Manny Sanguillen