Today’s Pittsburgh Pirates Card of the Day is half of a Pirates card. Pitcher Jim Shellenback is making his first appearance in our long-running series. He is shown here on his rookie card, which is pricey.  The card also includes a pitcher named Ron Willis, who probably isn’t well know around these parts. Let’s get right into this card from the 1967 Topps set, and learn more about both of these players and why their rookie costs so much now. 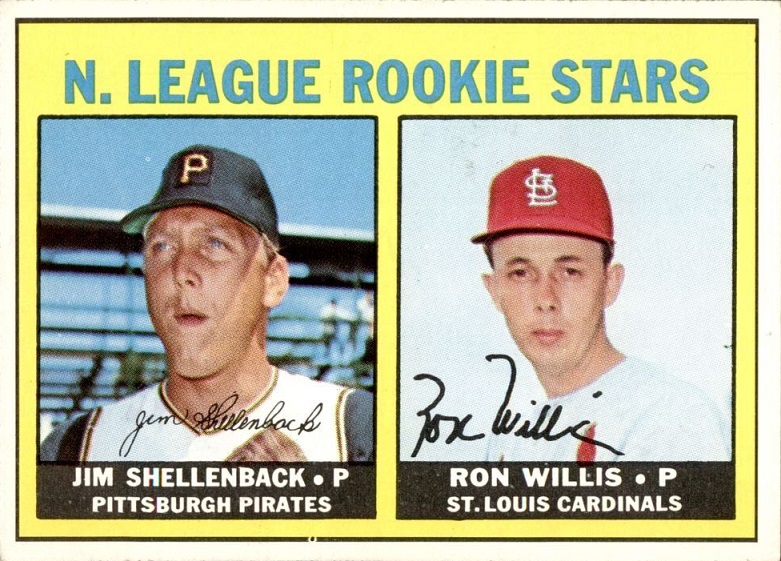 There’s Shellenback with what looks like a shot of the bleachers behind him. I was going to say that it’s a nice baseball scene, but I realized that it only seems like a baseball scene because he’s a baseball player. Take him out of the photo and it certainly doesn’t scream baseball. It’s better than the shot of Willis, which appears to be the sky behind him, unless they got rid of whatever was in the background.

I’m not a fan of the 1967 set, but the rookie cards like this one do have some added colors that give them more eye appeal. I’m not sure that most people would know that this is a 1967 card because it does look different than the regular one-player cards in the set. I’ve mentioned this before, but I’m a fan of the rookie cards because it’s always fun to try to figure out what Topps was thinking with their choices, while seeing how the selection worked out.

I’ll note that these cards have facsimile autographs, but a real Ron Willis autograph is worth some money. As you will see below, there’s an unfortunate reason for that fact.

Here’s the back of the card. 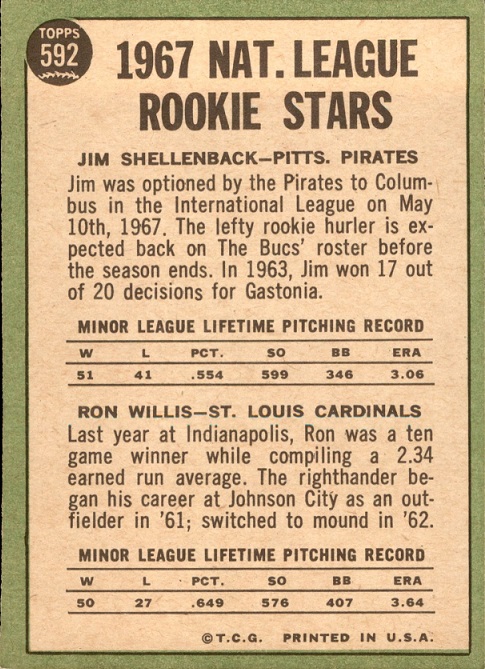 I tell you this next fact only because it caused me to pause when it happened. I label scans here when I upload them with the player’s last name. I’ll never look for a Ron Willis scan again, so of course this one was labeled “Shellenback”. For the back scans, I always just add back to the end of their name, so this one is labeled Shellenbackback.  Anyway, on to the real stuff on the card.

One interesting thing from the front that I waited to mention is the abbreviation of National League. The usage of “N. League” seems like such an odd decision. What makes it even more odd is that they wrote “Nat. League” on the back. We are used to “NL” or just writing out the entire name, but Topps decided to try out some new things here.

The backs here don’t give you ages or any bio info like that type of stuff, so you’re forced to look at stats here and see who actually appears to be a prospect. Willis has quite the record, but he also has a much higher ERA that Shellenback. You can figure that they probably had about the same amount of time, though they do tell you that Willis was an outfielder first, and that he’s been around since 1961. He actually did well in his brief big league debut, throwing three shutout innings over four appearances, allowing one hit. Despite being around for a while, he was only 23 years old when he debuted. He had quite the 1967 season, making this look like an excellent choice. Willis went 6-5, 2.67 with ten saves in 81 innings over 65 games. He had a very odd stat line that showed 43 walks and 42 strikeouts, but a closer look shows that 20(!) of his walks were intentional.

Shellenback was also 23 years old when the 1967 season started and he too pitched three innings in 1966. So they were at a very similar point in their life/careers. He did well in 1967, except he didn’t spend the entire year in the majors. He had a 2.70 ERA in 23.1 innings for the Pirates. As I alluded to with Willis, if you’re getting one of these cards late in 1967, you’re probably thinking it has a chance to be a good card down the line. As it turned out, neither of them really panned out, despite success at a young age. Shellenback pitched until 1977, but his big league time after 1972 didn’t even amount to a half season of work. Willis was done with the majors by 1970. That was also his last year in pro ball. His story has a sad ending, as he passed away by age 34, dying of a brain tumor in 1977. His birthplace is listed as Willisville, Tennessee, which was not a coincidence. It was a small area owned by his family. Jim Shellenback is still with us, turning 79 years old today.

These cards are high numbered cards, printed later in the year in small quantities, which raises the value. You can’t get these cheap, unless you find one in low grade and ungraded. The cheapest auction with a buy it now for this card is $84. There are seven copies, all of them graded, which have price tags north of $200. The best way to get one is in a straight auction. Someone listed one for $35 recently and it sold immediately, so that could happen too if people don’t know exactly what they have in their hands.