It’s been some time since our last Pittsburgh Pirates Memorabilia post, but I plan to do more for the series in the future. I wanted to post this particular article now because it is currently up for auction and you have a chance to own it. This is neither my item nor is it a paid ad, just a legit top tier auction house listing a great item that should interest many of the readers on this site. Even if you don’t have interest in bidding, it’s still a great item related to Pittsburgh Pirates history that you’ll want to see.

Small pins of baseball players were quite popular at the end of the 19th century into the early 1900s. We have featured a few of them here, either in our memorabilia section, or stretching the definition of “card” in our Card of the Day series. Most pins were small, so they were perfect for one player, usually listing their name, maybe position, and the team name, with a photo of the player from the shoulders up. Today’s memorabilia item managed to fit an entire team onto a pin. It’s not just any team though, it’s the best team in Pirates history.

The 1902 Pirates hold the team record for winning percentage in a season with a .741%, thanks to a 103-36 record. That was despite the fact that the team was decimated by injuries and players jumping contracts late in the year, so they had to use some fill-ins who didn’t exactly live up to the “best team in franchise history” standard. Harvey Cushman will forever be linked to the best team in Pirates history (until the 2028 Pirates win 116 games obviously), but his contribution to the club late in the year was taking the loss in all four of his starts. Those were also the only four games he played in the majors.

One interesting note about that 1902 Pirates team is that they were so good that the fans lost interest in the team late in the year. They won the National League pennant by 27.5 games, and their fans moved on to other things a month before the season ended because there was no such thing as postseason play, so their season was over. They wrapped up the pennant exactly a month before their final game of the season. They only had eight more home games left at that point and the team drew poorly during that time. They were so good that they bored their fans. The next year the Pirates played in the first World Series and the attention of the fans stayed throughout the season.

Here’s a look at the pin celebrating that team and their achievement: 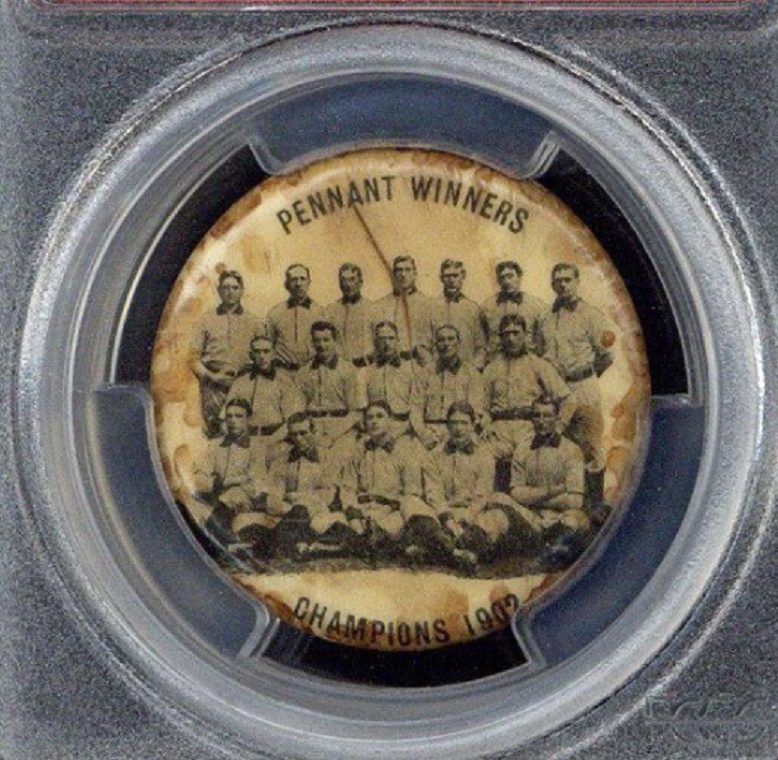 This is enlarged to show detail. The pin is in a PSA 2 holder and it’s currently being auctioned by Love of the Game. You can view the details here at this link if you’re interested in the item. Below is a description of the pin pulled from their website.

Incredibly rare celluloid pinback picturing the members of the pennant-winning 1902 Pittsburgh Pirates. Manufactured by the Whitehead & Hoag company, a New Jersey company that manufactured many of the pinbacks of the era, the pin celebrates the 1902 Pittsburgh Pirates. The image is a team photo that includes Hall of Famers Jack Chesbro, Fred Clarke and of course, Honus Wagner, with text at the top reading “Pennant Winners” and at the bottom reading “Champions 1902.”

There are 17 players on the pin. The team used 27 players throughout that entire 1902 season, even with the injury/jumping issues at the end of the year. They actually had just 17 players that year who played at least 20 games all season. You could possibly think that this photo is the 17 players who saw all of the action, but this is actually a 1901 team photo. You can find this picture online with a 1901 copyright date on it, plus there is the presence of a player who wasn’t on the 1902 team (George Yeager in the upper right corner).

Part of the intrigue with this pin is the early photo of Honus Wagner. There aren’t many Honus Wagner items out there from prior to 1903. The photo itself is a year older than you would think it is by the date, but it’s only the issue date of the pin that matters.

Here’s a look at the back of the pin: 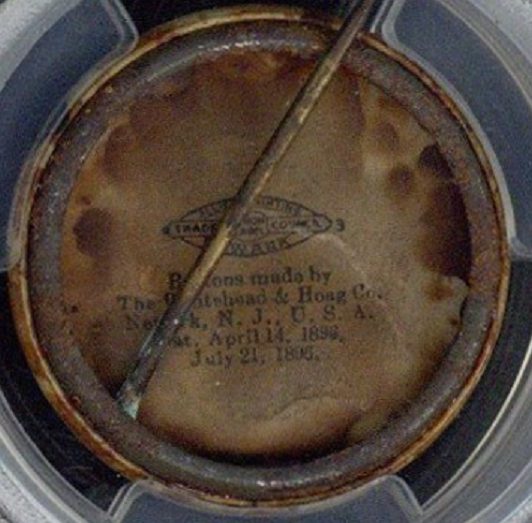 As you can see, the button is in rough shape on the back, but the back has little to do with the value. I would at least suggest that it could be unwise for your health to wear one of these pins, with 120 years of rust on that sharp object. It’s also in a graded holder, and would be wise to keep it in the holder for value. The writing on the back is just for the company that produced them and those dates listed relate to the company itself.