Today’s Card of the Day comes from a set that hasn’t been featured here in quite some time. The last appearance for the 1933 Goudey set was January of 2021 when we celebrated Hall of Fame pitcher Waite Hoyt. This set is still extremely popular to this day, so I probably shouldn’t wait another 22 months before it shows up again in this series. On this date in 1933, the Pittsburgh Pirates traded Tony Piet to the Cincinnati Reds in a significant four-player deal, with two players going each way. The trade worked out for the Pirates because they got five seasons of pitcher/pinch-hitter Red Lucas, but the other three players in the trade didn’t contribute much. Piet is card #228 in the 1933 Goudey set. 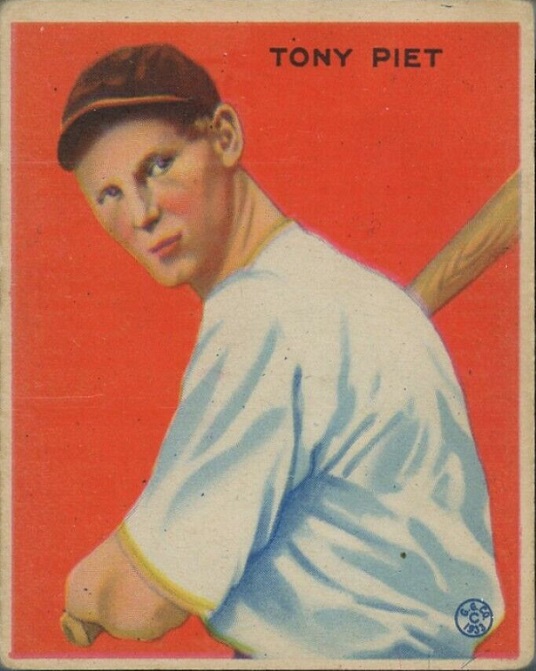 I just recently talked about old artwork and how they sometimes did a good job, but other times completely missed, and the player would look too generic. I couldn’t find the exact picture that this work was based off of, but there are a decent amount of Piet photos out there to check out for comparison. At first I thought this was just bad artwork, but you can see some similarities in the eyes, and side profile shots seem to look somewhat similar. In my opinion, the only thing that seems off is his face had slightly more of a round look than the long oval look you see here. The thing that is bad here is the uniform colors. I don’t know where they got yellow for the bands around the sleeves and collar. I also don’t know about the maroon hat. It certainly doesn’t look like a Pirates uniform.

Some of the cards in this set have baseball scenes in the background. Others look like this one of Piet, with a solid one color background. The set is popular because it’s loaded with Hall of Famers, including four cards of Babe Ruth. The Pirates set is pretty impressive, consisting of Waite Hoyt, Paul Waner, Lloyd Waner, Pie Traynor, Freddie Lindstrom and Arky Vaughan. It also has two pretty good all-time Pirates in Gus Suhr and Ray Kremer, as well as Adam Comorosky, who accomplished one of the most interesting feats in baseball history in 1930. He had 47 doubles, 23 triples and 12 homers that season. No other player in Major League history has reached those three numbers in the same season. 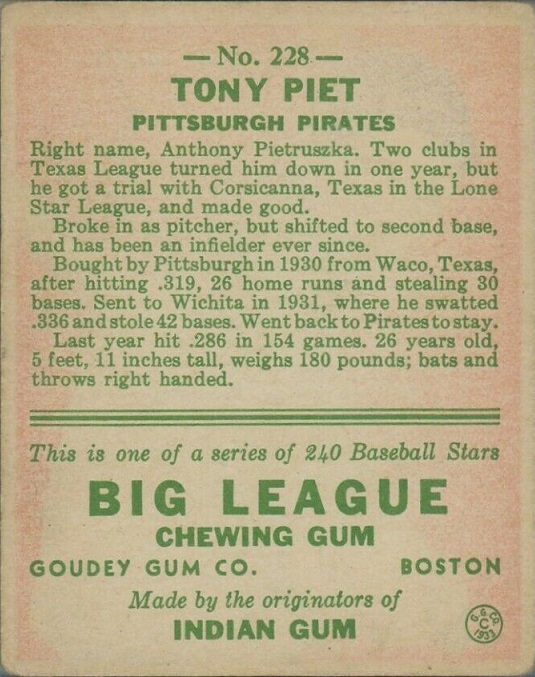 I’m a big fan of the backs of these cards because they are all loaded with information, even with a decent sized advertisement for Goudey on the bottom. As you can see here, Piet was a pretty good hitter coming up through the minors. His best days in the majors occurred with the Pirates before the trade to the Reds. He had a nice eight-year career in the majors, compiling 9.9 WAR.

One thing I wanted to highlight with this particular scan is that you can see the outline of the red background from the front, except it’s reversed. That happened when the printers stacked the sheets too quickly. In the old baseball card industry, that’s called a wet sheet transfer. There are collectors out there for printing flaws like that, though most prefer something actually printed on the card, as opposed to being transferred from a different card UNLESS that different card is a different player. I collected some printer “errors” from the T206 set, but there were ones that didn’t interest me and others I thought were priced too high. To each his own.

If you’re interested in getting a card of Piet, there aren’t a ton of options on Ebay, but there are some very interesting ones. The most expensive is a PSA 5 for $350, with a best offer option. There’s one that includes an autographed index card in a display for $295. There’s a PSA 4 for $200, and two signed copies around $175 each, both authenticated. Piet lived until 1981, so he had a long time to sign these cards, and not many other options for signed cards. I mentioned a PSA 4 was $200, but someone has a PSA 4.5 for $120, so that’s a much better deal. If you just want the no frills collector’s grade copies, there are a few in the $30-$35 range. You might be able to get it a little cheaper if you wait for a straight auction listing, instead of a set price listing.