Today’s Card of the Day is from the 2004 Upper Deck Diamond Pro Sigs set. Our featured player is Mark Corey, 2003-04 pitch for the Pittsburgh Pirates. He’s from a small town in northwest Pennsylvania called Coudersport, which also produced a second recent big league pitcher in Josh Kinney. He made a total of 54 relief appearances for the Pirates over those two seasons, going 2-4, 4.91 in 66 innings. This is his first appearance in our Card of the Day series (on his 48th birthday!), and it’s also our first look at this set. He’s card #209 in the 230-card set. Let’s get right into this interesting card. 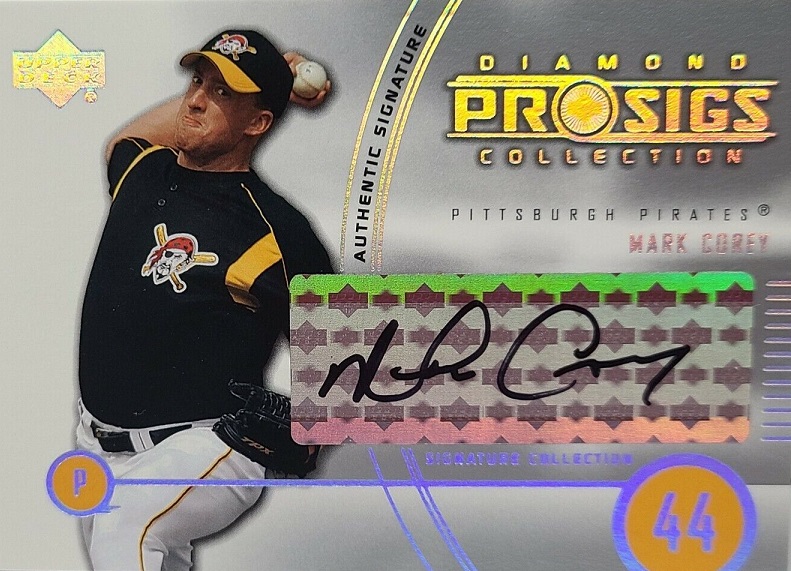 If you have read enough of these articles, you already probably know I don’t like the look of this card, so I’ll start with what I do like. That’s a nice action shot of Corey, wearing a uniform/hat combo from that era that I’m torn on. I love that logo, looks great on the uniform and hat, but I don’t like the random gold on the jersey or the gold brim of the cap. I can live with the cap, but it looks better to me in all black. At least it doesn’t have the red and orange from that era. I also like the silver background of the card. The other thing I like is Corey’s autograph.  It’s not the easiest to read, but I’ve seen too many 2022 autographs from players that look like they tried to write with their feet. Current autographs are approximately 97.3% garbage. As for the bad…

The coloring on this card is what gets me. It’s just wild. What’s with the purple and orange for the position and his uniform number…in case you were wondering what “44” was in the bottom right. Some people on Ebay thought it was the card number. The Diamond Pro Sigs Collection logo would look nice if it went with anything else on the front. The part with the signature is even crazier. What is it supposed to be? It makes me think that someone added mint chocolate chip to Neapolitan ice cream. In theory, that’s not a bad idea (I’d substitute mint chocolate chip for strawberry to be honest), but what is it doing on the front of a baseball card? Some might not get the reference, but Topps recently hired various semi-famous artists to give their own spin to iconic cards. This has the makings of being a good card (Corey photo, silver coloring, Diamond logo) that was attacked by one of those artists. 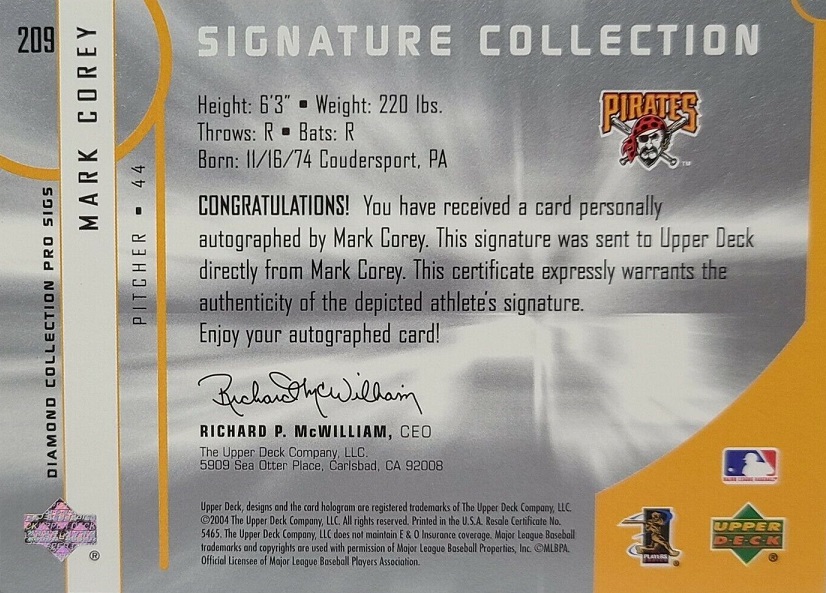 If this back didn’t literally explain that it’s the card we saw on the front, then I wouldn’t believe that they two sides matched up. The back looks normal. It’s also nice looking. It uses Pirates colors, the silver background and it includes that great Pirates logo. Nice job Upper Deck, now can we talk about the front?

If you are interested in this card, you don’t have many options. However, one of those options is harder to find than this card shown above. You can find this card numbered to 25, with a slightly different (better) look on front. That copy is more expensive, going for $21. There are two of the regular copies like shown above. Those are priced at $5.24 delivered with a best offer option, and $7 delivered for the other. If you don’t mind the look of the card, then make that first one an offer and see what you can get it for under the asking price. There are no sold copies in the last three months, so these don’t show up often.