I don’t have to match up the Card of the Day subject to the date, but I usually do anyway, just to give an extra little highlight to one player. That’s going to be hard going forward for November 15th because there weren’t many card options from the start. With four players and two who barely played for the team, there wasn’t much of a choice on what to go with today. This is our second article featuring Gus Bell, and his next appearance will have to be one showing him on a different team, which means this could be his final Card of the Day article. The first article looked at his 1952 Topps card. Today we are going to the 1951 Bowman set, purely by process of elimination. Bell is card #40 in the 324-card set. 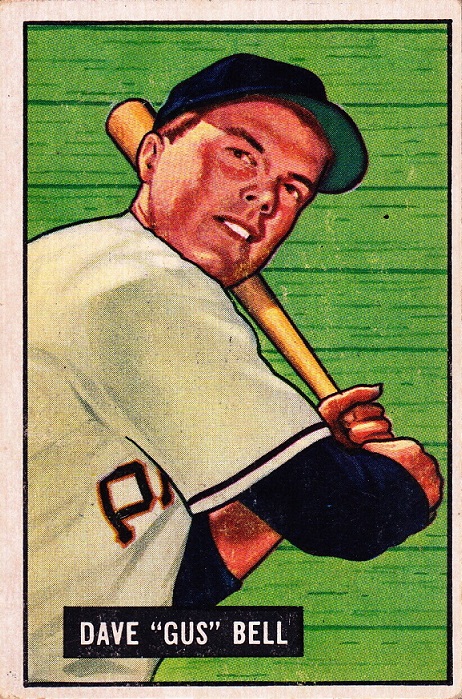 The early Bowman cards had such a basic setup, but they are still somewhat popular to this day. That’s partially because there is barely anything else as far as competition from their early years. This set had a white border, black frame around the artwork photo, and a box with the player’s name. Even with the box, they went just plain old black and white, with no real design to it. It’s boring, but it works. These cards measure 2-1/16″ by 3-1/8″, making them shaped smaller and different from your average cards now.

Some of the artwork in this set is really good. Some have a bit of a generic look, but this has good facial details. I tried to find the photo that this was based off of, but the closest I found was a picture that was clearly taken after this set came out, because he was pictured with the Cincinnati Reds. It’s almost identical to this card, except the uniform details. Credit to Bowman here for getting the uniform colors correct, something that Topps had trouble with in their 1952 set. Most of the cards have some type of baseball stadium background scene behind the player. 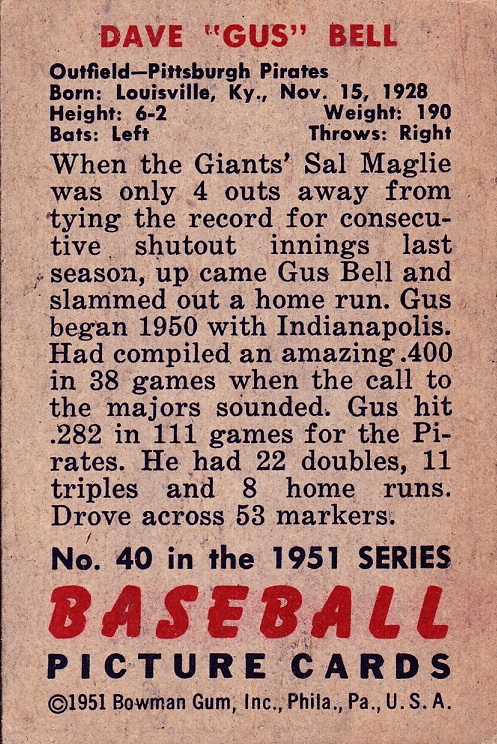 The backs of these cards have a little bio section for each player. I must have read this before because I have the 1951 Bowman Pirates set, but I don’t remember the fun fact about Sal “the Barber” Maglie. I also now want to use the word “markers” for RBIs in the future. I’ve heard that usage before, but I have never used it myself.

The Pirates have made a lot of trades in their team history. Some went great, some went poorly, most were average. The trade of Bell was one of the poor ones, which could have been much worse if he didn’t peak at such a young age. They brought him to the majors in 1950 at age 21, and he was gone before his 24th birthday. They got rid of him for three players who provided very little, with veteran Cal Abrams making it a somewhat even deal in 1953, but it was one that got much worse the next year. Bell put up 12.7 WAR in his first four years with the Reds, and he was just 27 at the time of that fourth season. His quick drop made this deal not stand out so much in history, but that drop was clearly at that age where it could have been much worse. Many players peak from 28-32, but he had -0.3 WAR over the rest of his career. The Pirates won the World Series right in the middle of that time, while he was plugging along as a replacement level player for his last eight seasons.

Overall, Bell had a nice career, and he was the first generation of a rare three-generation family in baseball. It’s just too bad that more of that didn’t come while in Pittsburgh.