Today’s Card of the Day features a first-time player in this series on a 1999 Topps Stadium Club card. Infielder Abraham Nunez was considered to be a key piece in the 1996 trade between the Toronto Blue Jays and Pittsburgh Pirates, in which nine players were part of the deal. The Pirates were giving up three players with plenty of big league experience, while taking on six players who combined had two games of big league time.

Nunez was rated as the #69 prospect by Baseball America prior to the 1997 season, then he bumped up slightly to #65 before the 1998 season. His only pro experience prior to the trade was the Dominican Summer League and the short-season New York-Penn League. However, the 21-year-old was in the majors by August of 1997, without even seeing any time in Triple-A. He played 19 games for the Pirates in 1997, and 24 more late season games in 1998, so he was still considered to be a rookie when these 1999 Topps Stadium cards were released. Here’s a look at card #236 from that set. 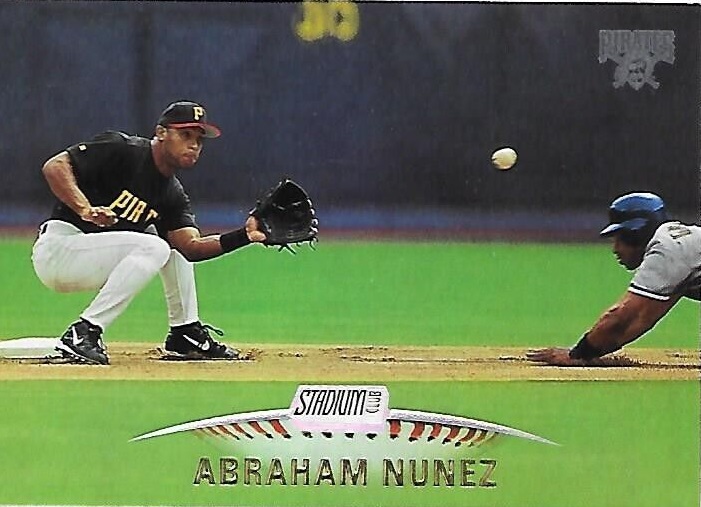 Topps used a horizontal layout for this card, which allows for an amazing photo. It’s also helped out by their “no border” design, and by the fact that the card design was rather small this year. This photo is all about timing. Taken a split second sooner and the runner and the ball aren’t in the photo. It would still be a nice action shot of Nunez, but the ball and runner add so much more. You begin to wonder what happened on the play. It certainly looks like an out is about to occur. The one thing I don’t like here is the silver foil Pirates logo, as opposed to the original look. Check below in the back and pricing for more on the logo. 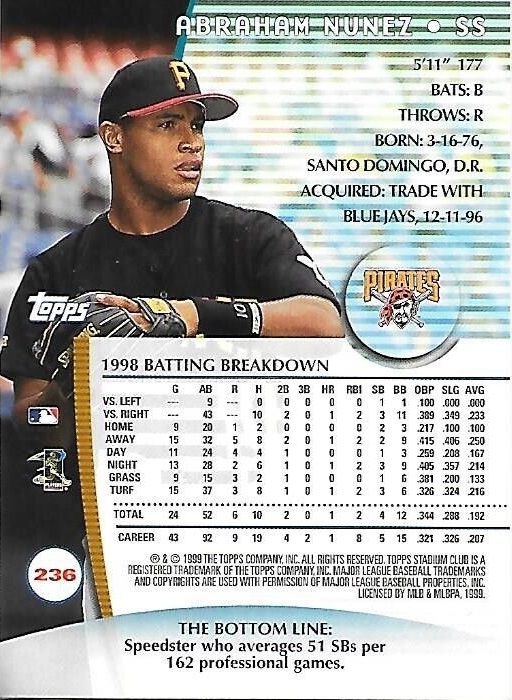 The back has a vertical layout, typical of all cards in the set, but opposite of the front. They added a second photo of Nunez, which was much more of a closeup shot than the front photo. The stats were broken down into splits in different situations, though everything was based on a small sample size. As you can see, his 1998 stats (line that says total) and his career stats weren’t much at that point. It’s interesting that they called him a speedster because speed wasn’t a big part of his game in the majors. He topped out at nine steals in a season and he only attempted 54 steals in his big league career, covering 1,030 games. One last highlight on the back is that Pirates logo in color.

If you’re interested in this card, there is only one auctions that stands out. There’s a card variation called a “one-of-a-kind” that has a slightly different look and it was numbered to 150 copies. Unfortunately, the price on that is extremely high, listing at $35 delivered. I like that the one-of-a-kind card has the Pirates logo on front with the actual colors, but I don’t like it enough to pay anywhere near that asking price. There are only a few listings for the regular card, though that’s all we really need here. Three of you can get it for under $3 delivered. After that, there are a few around $4, and then higher prices from those who overcharge for shipping.

I have to note one thing with Nunez that isn’t available on any 1999 Topps Stadium Club cards right now. He has a terrific looking autograph, so if you want to get something from him, you might want to try one of those cards. For the most part, they are reasonably priced.