Today’s Pittsburgh Pirates History didn’t give me many options to match up with our Card of the Day article. There are five pitchers born on this date and three of them didn’t have any cards showing them on the Pirates. One of the other two is Gene Garber, and his Pirates card was only 1/2 of a card, shown here on this 1983 Topps Super Veteran card. The other player born on November 13th is the one you see in the title.

I searched Ted Wilks/Pirates on Ebay and two cards were showing up in the results. His 1952 Bowman card and his 1952 Topps. We already looked at the Bowman card one year ago today, so today’s choice was made for me. Due to a process of elimination, we are looking at the 1952 Topps card of Ted Wilks, 1951-52 pitcher for the Pirates. This is card #109 in the iconic first major set from Topps. 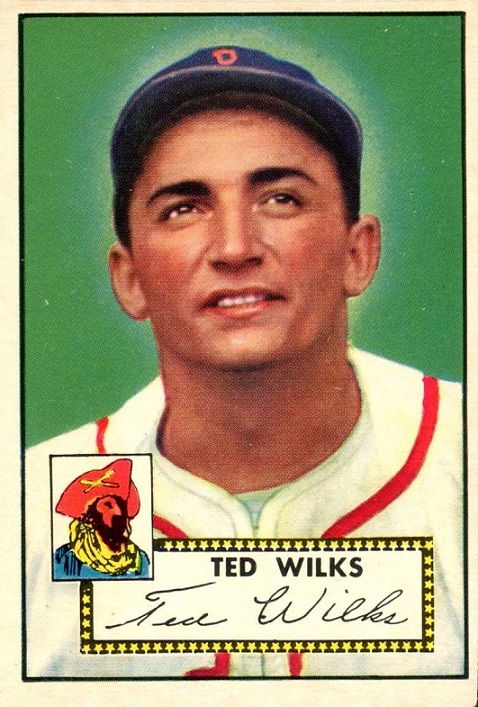 There is a lot of red on this card that shouldn’t be there. In fact, a couple Ebay listings had the wrong team listed, with sellers looking at the cards and figuring this wasn’t the Pirates I guess. The Pirates started wearing black and gold in 1948, and Wilks joined the team in the middle of the 1951 season, so he was definitely wearing black and gold during his entire stint with the team (he stayed around until August of 1952).

The other added red is on the Pirates logo. I noticed this on a bunch of the cards for Wilks. It’s strange how much variance there is in the look of the Pirates logo throughout the 1952 Topps set. You would think that it would be standard for all of the players, but in some he is as white as a ghost, others look shades of tan/brown, others have more defined beards, and then this one is as red as the hat. As iconic as the 1952 set is, it has a lot of variance. The Pirates players have all different color uniforms. Wilks isn’t the only error as far as team colors go. That all being said, it’s still a great set and extremely popular with collectors too. 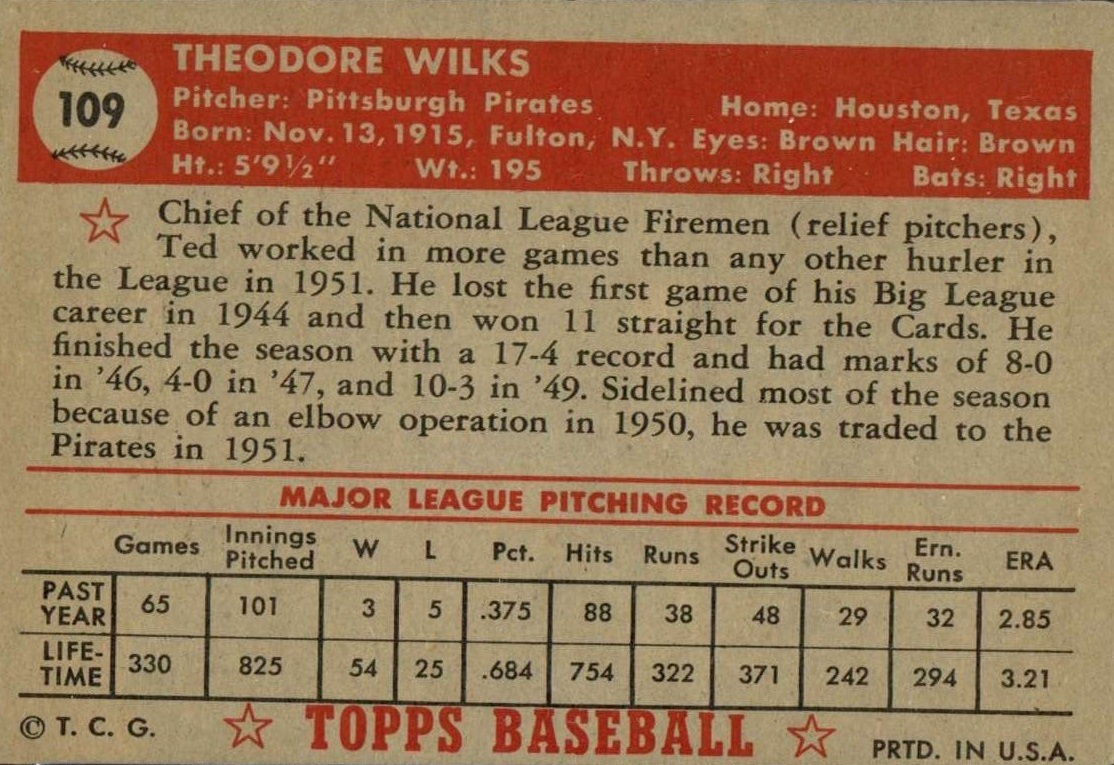 I always have to mention this when we look at this set. It seems so odd to see the back listing the eyes and hair color of players. This back looks like I chose a crooked scan, but this is actually how they printed up the back that goes along with the front scan above. I was going to use a different scan, but I then figured it went well with the quality control talk above. Not only was the back printed on an angle, the walks category in the stats also somehow got put on a different angle than everything else. I like how Topps let you know that relievers were called firemen, just in case it was too confusing. As you can see from the career stats, Wilks had quite a winning percentage. He finished up with a 59-30 record.

As I mentioned, this set is still very popular, which is good if you’re a buyer of lower grade cards. Most of these cards exist now in lower grades and Ebay is full of them. If you want a high grade/graded copy, these will cost you a lot, but the low grade/ungraded copies can be had for under $10 delivered. Prices that low will have some condition issues, so my opinion is to go for cards in the $15-$20 range. A few listings of graded cards are over $100, but be careful of grading companies that you might not recognize. One graded 8 by an off-brand grading company probably won’t get more than a 4-5 graded by PSA or SGC. You might be getting a better card cheaper (assuming there’s nothing wrong), but the holders matter during resale.