Today’s Card of the Day is a good lesson in the phrase “You can never have enough pitching”. The Pittsburgh Pirates had a really interesting foursome of pitching prospects at the upper levels in the 2011-12 time-frame. Two of them were trade acquisitions and two were draft picks. Rudy Owens, Jeff Locke, Justin Wilson and Bryan Morris were all starting pitchers with upside. As it turned out, only Locke was a starting pitcher in the majors. Owens got sidetracked by injuries after being traded to the Houston Astros, while Wilson and Morris were effective relievers for a time.

Today’s card choice comes from the 2013 Topps Heritage set, which used the 1964 Topps design. It features Wilson and Morris on the same card. I picked it today because the Pirates traded Wilson to the New York Yankees for Francisco Cervelli on this date in 2014. This is a card that I bought off of Ebay as soon as I knew it existed. Let’s get right into the card, which is #418 in the set and also referred to as a Pirates Rookie Stars card. 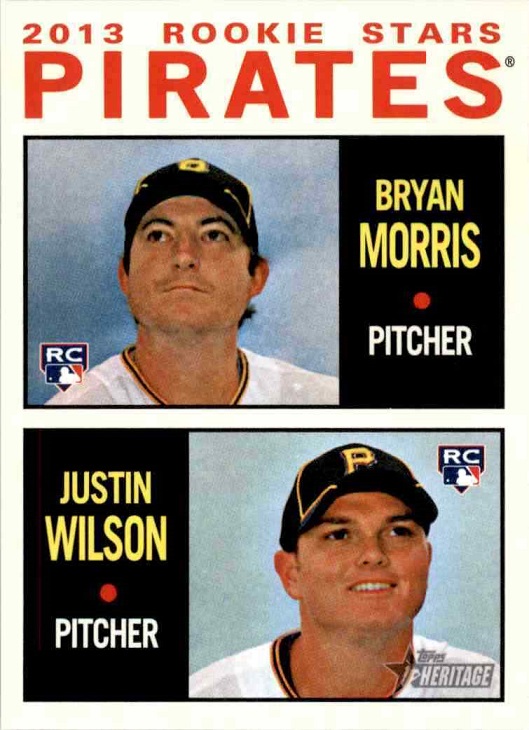 If you know you’re old cards, you’ll recognize the 1964 design. It’s not just the coloring and lettering, it’s the same Rookie Stars set up that they used for each team in 1964. The Pirates that year had two Rookie Stars cards, one featuring Bob Priddy and Tom Butters, the other with Gene Alley and Orlando McFarlane, which we covered here nearly two years ago. You can check that link to see the similarities.

One interesting thing here I noticed is the “RC” symbol that Topps started using in more recent years to let you know that it’s a rookie card of a player. You would think that being on a Rookie Stars card implies that it is their rookie card, but things didn’t always work out that way in the past for Topps. There are plenty of players who made it on to multiple Rookie Stars cards because they were still considered prospects the following year. I think the best Pirates example is Richie Zisk being in the 1972 and 1973 sets, with one being a Pirates card and the latter being for rookie outfielders.

As a side note, I was looking at just the top half of the scan when I noticed the RC symbol for Morris, then I scrolled down to Wilson and looked for the symbol in the bottom corner (same spot as Morris). When I didn’t see it there I began wondering if Wilson had a previous card or they only included one RC symbol for both. Crazy how I completely missed it for about 30-45 seconds in such a small space just because it wasn’t exactly where I looked. 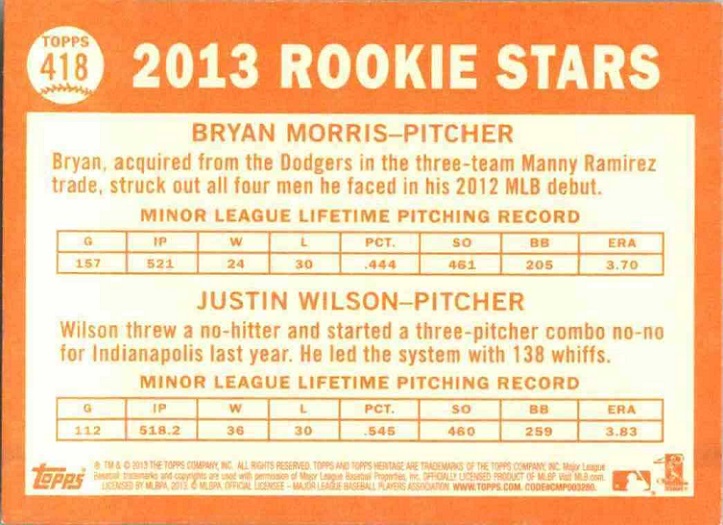 While it isn’t one of my top three sets from the 1960s, the 1964 Topps set still has a nice looking design. The 1962 sets is easily my favorite, followed by 1960 and 1968. This one is probably next. However, I do not like the back look. The 2013 Topps Heritage set used the same setup, colors as the 1964 set, and it really doesn’t go well with the front. It reminds me of a creamsicle, which isn’t necessarily a bad thing, but not what I look for in baseball cards.

The back only gives you career minor league stats and a very brief amount of info on each player. They mention that Morris had a strong big league debut, but they say nothing about Wilson’s time with the Pirates. He had a very interesting and nearly impossible to replicate performance during his first big league stint for the 2012 Pirates. He made eight appearances, allowed 13 base runners in 4.2 innings, and he gave up just one run. You won’t find too many instances where an ERA (1.93) is THAT much lower than a WHIP (2.79), especially over more than 1-2 appearances. Wilson still plays, though he was injured for most of 2022. Morris had some effective years before a back injury cost him much of his later years, and he walked away from the game in 2017.

If you are interested in picking up one of these cards, they are both plentiful and cheap. You can get one for $2 delivered from multiple sellers. The only two auctions of note are copies autographed by both players. Keeping in mind that it’s best to check autographs against known signatures, you can get one of those for either $8 or $14, whichever you think is better. Happy Collecting!