I mentioned yesterday that I featured Rabbit Maranville a day before his birthday on purpose. He’s a Hall of Famer, so you don’t really need a good reason to feature him, but he got moved up a day to make room for one of the Pittsburgh Pirates all-time greats.

Pie Traynor played his entire career with the Pirates and even managed the team for some time at the end of his playing days and beyond. He was just recently inducted into the Pirates Hall of Fame in the inaugural class, which was one of the easier decisions they made for the first class. Traynor was voted as the best third baseman over the first 100 years of baseball in 1969 during a year-long event celebrating the birth of professional baseball. Basically, he’s a player who isn’t surpassed by many in team history.

Traynor has been featured here as often as you would expect, but I think I got into my head a bit by including him here during four articles in the first year. His last solo article was way back in February of 2021. His only appearance since then was on a card that featured four players, and that was 14 months ago. I had no clue that I was going this long without featuring Pie Traynor, but that drought ends here with his 1934-36 Diamond Stars card. 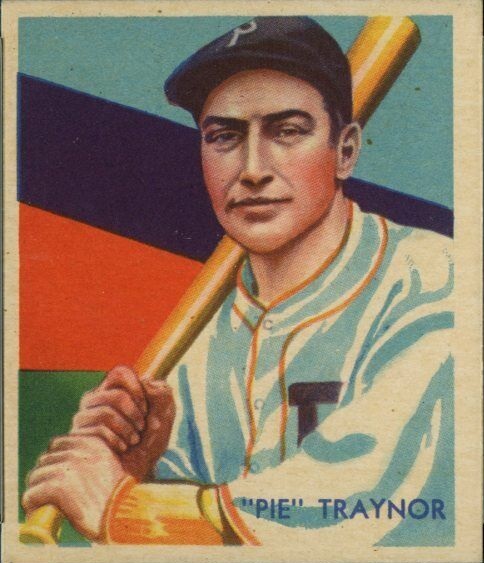 These Diamond Stars cards are interesting. It was a set of 108 cards produced over three years, starting in 1934. The card of Traynor was produced in 1935 according to the back, but you can find it referred to as almost any combo of 1934-36 (see pricing below for more). These cards measure 2-3/8” by 2-7/8”, giving them a closer to square look than the average cards you get in packs today. The cards have pretty good artwork, with many of the drawings looking very similar to the players, though some are better than others. This one for Traynor (in my opinion) is one of the better/more realistic ones. What’s really interesting about this card is the background. Most of the others have some baseball theme going on in the background. For example, the Paul Waner card has a catcher, umpire and someone off in the background. As for this Traynor card, I have no idea what they were trying for here. A lot of cards from this time include his nickname, but many also add his first name. 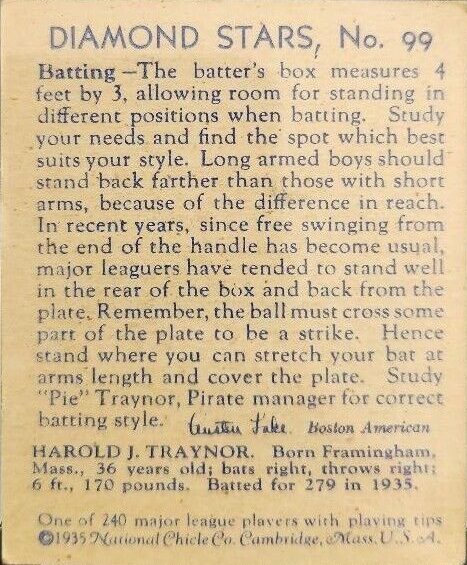 The back of this card gives a hitting tip, then suggests to kids to study Pie Traynor. Considering that he played just five games after these cards were produced, and there were no games on TV at that point (for good reason), no one had a chance to study his batting style. Very little about the back is related to Traynor, just the pointer and a little bit of bio info at the bottom. At the very bottom, you’ll notice that this says there are 240 players with batting tips and the card was printed in 1935. This definitely isn’t the only card where the number of cards doesn’t match up to the number on the back. Most say that they did that for kids to chase cards that didn’t exist, though this instance might be more to do with the set not continuing. These cards can also be referred to as “National Chicle” cards, but most people who use that, add it to Diamond Stars.