Today’s Card of the Day choice doesn’t match up to today’s history, but I have a very good reason for making that decision. There have been 12 former Pittsburgh Pirates born on November 11th and two of them reside in Cooperstown. One of them is much more well known as a member of the Pirates, so we will get to him tomorrow (no spoilers!). The other player is Rabbit Maranville, who played for the 1921-24 Pirates.

Maranville was a magician with the glove, which sometimes gets lost on people who look just at his offensive stats and wonder why he’s in the Hall of Fame. Those same people would question Ozzie Smith being in Cooperstown if they didn’t see Smith play. Maranville has the seventh most dWAR in baseball history, which shows that the metrics match the reports from his playing days, which is not always the case from back then. He scored the best dWAR in the league for all position players three times in his career. He was top ten in the league 14 times. He ranks first in putouts among all shortstops in baseball history, and he ranks first in assists in baseball history for all positions, 592 more than Smith in second place.

This is Maranville’s third appearance in our Card of the Day series. He has a few other Pirates cards I haven’t looked at yet, but it’s good to space out his appearances or we will quickly run out of options. The first appearance is actually one of my own cards, when we looked at a different 1922 card for him. His second appearance was a strip card with a much different look than the first (and from today’s choice too). Today’s card is a very rare one, and this is actually the first time I’ve seen an example. 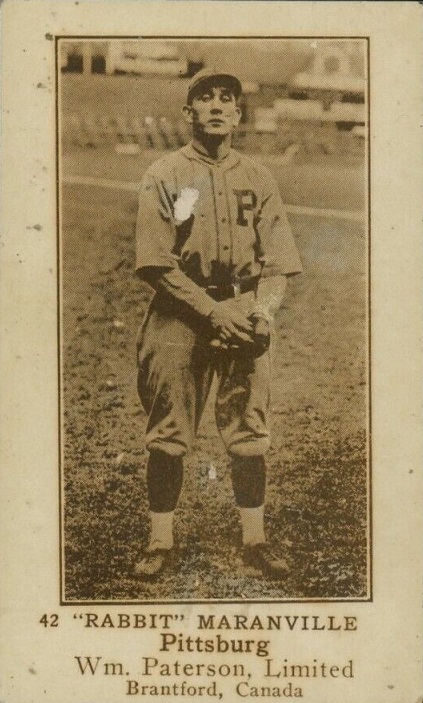 These cards measure 2” by 3-1/4” and there were 50 cards in the set. The backs are blank, so everything worth seeing is on the front. They were produced/distributed by William Paterson, a candy company out of Brantford, Canada. The “V89” designation lets you know that these cards were made in Canada. Most cards in the “V” categories are hockey cards. As you can see, those Canadians spelled Pittsburgh wrong. The no “H” spelling existed from 1890-1911. Maranville often went by his nickname, so you see it here on the card. His first name was Walter.

This is a great shot of Maranville, who doesn’t have a ton of photos out there with the Pirates. He spent 15 seasons with the Boston Braves, so a majority of his pictures show him on that team. What’s interesting about his time in Pittsburgh is that the Pirates had three different uniform looks in his four seasons, so his limited photos have some subtle differences. This one above is their 1921 uniform. In 1922, they tried out old English writing like the “D” for the Detroit Tigers. That lasted one year, and then the “P” logo went back to this look, but it was moved from the chest to the sleeve.

These cards are extremely rare. This is one of four cards from the entire set listed on Ebay right now and there are no completed auctions for the last three months. The price on this is $399, which might sound high, but it’s the cheapest of the four listings. The paper loss is unfortunate, but the card is in a graded holder, SGC 20.

10 Nov at 8:52 am
Card of the Day
Featured, Rabbit Maranville