Today’s Card of the Day article subject is Pittsburgh Pirates pitcher Nick Maddox, who packed a lot into a somewhat brief big league career. He has appeared in our Card of the Day series once before on his 1909 E95 card. That was posted last year on the anniversary of his no-hitter, which is recognized as the first no-hitter in team history, accomplished back on September 20, 1907 in his third big league start. The Pirates had two earlier no-hitters that were once recognized as such, but when the rules changed to only recognize games that went at least nine innings, those two games lost their status.

Maddox followed up his late season heroics in 1907 with 23 wins during the 1908 season. He then helped the Pirates to the 1909 World Series, where he pitched and won game five. It was said that he hurt his arm in the process and the 1910 season ended up being his final one in the majors. He put up a 43-20, 2.29 record in his brief time in the majors, then finished out his career in the minors and semi-pro ball.

Due to the short big league career, Maddox doesn’t have a huge amount of card choices, but he will be showing up here a few more times I’m sure. I left his two most popular cards for future articles and decided to look at the E90-2 set. I featured this little hidden gem set here back in July of 2021 for the first and only time before today. The set contains 11 cards total and they are all Pirates players. So here’s a second look at this set featuring Nick Maddox. 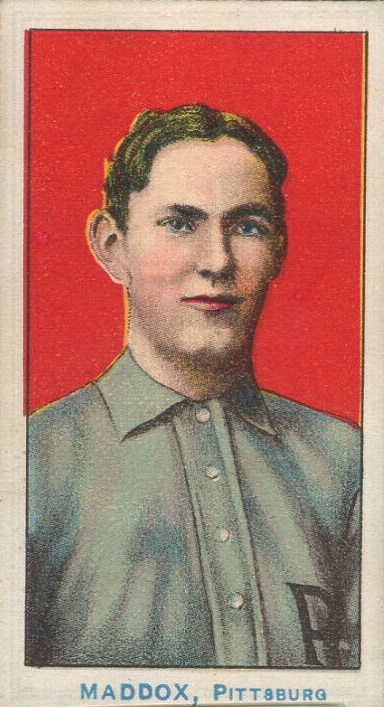 These cards are similar to many from that era, including the ultra-popular T206 set, which features the famous Honus Wagner card. The T206 Maddox is one of the two cards I saved for a later date with this card choice. This card actually has nicer artwork that the T206 Maddox, which actually has more of a generic player look to it. This one actually looks like Nick Maddox. What is interesting about the artwork is the uniform look. There was no “P” on the left chest of the uniform then. There was during his first season, but that one was red and there was a pocket there. You could give the artist a pass if he was going off a black & white photo from 1907, but the Ham Hyatt card linked above also has the “P” and he wasn’t with the 1907 team. That was definitely some artistic embellishing. These cards are much smaller than the cards you are used to if you only collect newer cards.

One of the easy identifiers with this set is the blue writing at the bottom. It’s not the only set with that, but that’s where flipping the card over becomes the clincher… 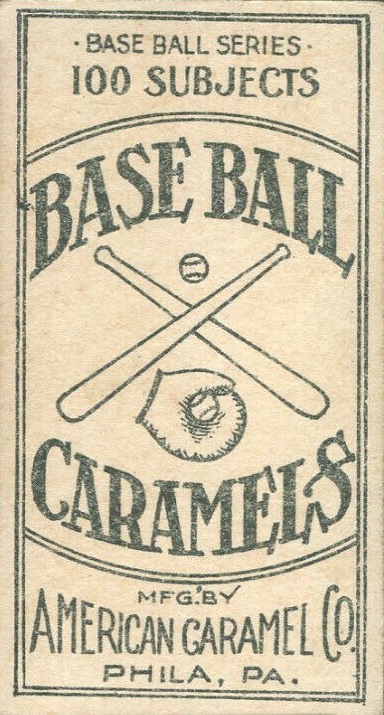 The reason this set is designated as E90-2 is because it uses the same back as the E90 set. As I’ve mentioned a few times in the past, the “E” means early candy cards, and the “90” was part of a numbering system made up long after these cards came out. The “90” has no connection to the set, the sets just go in numerical order. If you search our older Card of the Day articles, you will find other sets from this era that start with “E” and the numbers are very close to 90.

The reason this card isn’t part of the E90 set is because of the blue writing on the bottom. The E90 set is much bigger and the cards have black ink on the front for the name/team.

I’m a fan of these backs, manufactured by the American Caramel Company to help promote their products. The baseball part of the design (ball, bat, glove) is rather simple, but it gives the cards an old-time feel. It’s something that newer cards would use on throwback designs.

There is only one example of this card for sale right now and it’s probably going to be listed on Ebay long after this article is posted. It’s graded PSA 6, which is an impressive grade for a hard-to-find card. The seller is asking $2,195…plus $3.60 shipping. There are no recent sold listings, so you might be waiting some time to get one of these.