Wally Westlake was a good hitter overshadowed during his time with the Pittsburgh Pirates by a great hitter. He was an outfielder during the 1947-51 seasons in Pittsburgh, just like Hall of Famer Ralph Kiner, who was leading the league in homers every season. Westlake wasn’t a slouch by any means. He too showed off some power. Before he joined the Pirates, the team’s record for homers in a career was 109 by Paul Waner. Westlake played 4 1/2 seasons in Pittsburgh and he hit 97 homers. He also averaged 100 RBIs per 154 games (the season length back in 1947-51).

There aren’t many Card of the Day options for Westlake that show him on the Pittsburgh Pirates. I already used his 1950 Bowman card for his first appearance in this series. That card was posted exactly one year ago today because Westlake was born on November 8, 1920. Now we go to a very rare card for his second appearance, picking one from a set produced in 1947, which is referred to as the Sports Exchange set. 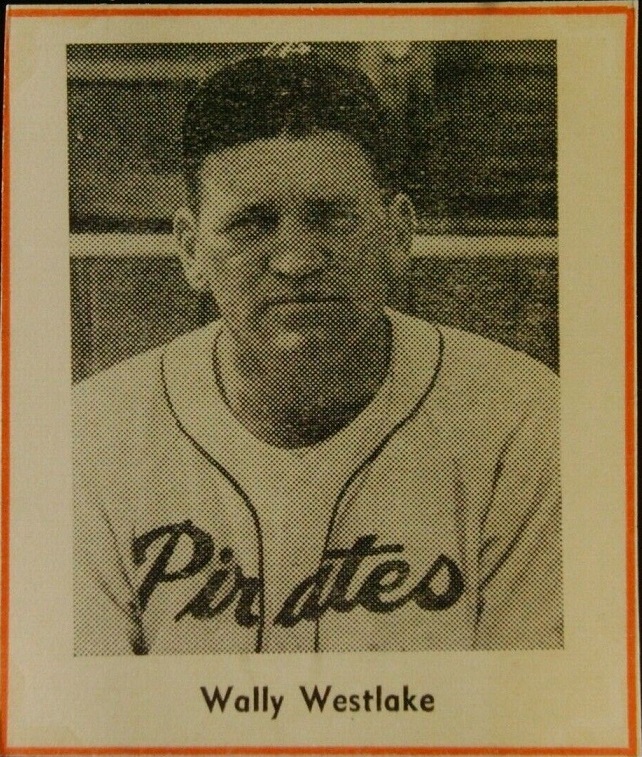 The backs of these cards are blank, so you’re looking at everything here and there’s not much to talk about. It’s a black and white photo of Wally Westlake, with his name and a border around the card. These cards came in three different series and each had 36 cards, giving you 108 cards total in the set. They were unnumbered, so Westlake got assigned #105 due to alphabetical order. In something that is somewhat of a huge coincidence, he would have been card #105 on the checklist whether they went alphabetical by first name or last name. He’s ahead of Ted Williams, Hack Wilson and Mickey Witek on the accepted list, but by first names he would only be ahead of Warren Spahn, Whitey Kurowski and Yogi Berra, giving him spot #105 on both lists.

These cards should measure just about 2 1/2″ by 3″, but they will vary slightly in size because they are hand cut. You want them to at least be that minimum size, and bigger is acceptable, but there is one important detail to that rule of thumb. If you’re looking for a card of Westlake, you want that border to be complete that you see around the edge of the card. You can see on the scan here that someone did a little bit of a boo-boo in the top left corner, but I believe that’s still an acceptable cut. Anything smaller would get an authentic grade. I don’t know what it is about hand cut cards, but those back-in-the-day collectors were reckless with their scissor work.

As noted in the title, these cards were released in 1947. I also noted that he played for the Pirates in 1947, which was his first year in the majors. That not only makes this his rookie card, it’s also an early look at him in a Pirates jersey. If you know your jersey history though, you would have already known that fact. The Pirates used black and gold for the first time in 1948, and the uniforms switched from the cursive Pirates across the front to block letter writing, with Pirates for the home jerseys and Pittsburgh for the road jerseys. Everything dark in the uniform/cap photo of Westlake above is actually the color blue.

If you are interested in this card, there is one option on Ebay and it is $65.85 plus tax (delivered). However, that one option does have a make offer option, so you can get it cheaper. There are no sold options, so you’re basically looking at one card being available over the last three months. As I said, they are rare, so whatever price you can get them do to would probably be a nice buy.