The most famous Pittsburgh Pirates player born on November 7th is probably Dick Stuart, though Kris Benson might edge him out because a lot more current fans saw the latter play. Stuart was retired long before I was born, but since I spend so much time on the history side, the power-hitting first baseman with the tin glove seems to still be well known. It helps that he was a key player on a World Series winning team. Being a power-hitter helps too, as does being extraordinarily bad at defense. While I was updating his bio posted today in the daily history article, I wondered if Stuart was a bit sad when the DH position came along not too long after his final games. If he came along ten years later, he would probably have some bigger Major League stats.

As I looked to see what Stuart cards I’ve used here before, I was surprised to find out that he’s been only featured here once, which was exactly a year ago today. My memory must not be that great anymore, because I started off that one article by saying that I was surprised that he had not appeared in the series until that day. We started almost daily Card of the Day articles in March of 2020 (you can/should view all of them here), so we are talking about 33 months with one article before today. I went with a rare card today for the occasion and I make no promises that the card title didn’t make me giggle like a little schoolgirl. Today’s card is a 1962 Kahn’s Wieners Dick Stuart, and boy did they have some slogan… 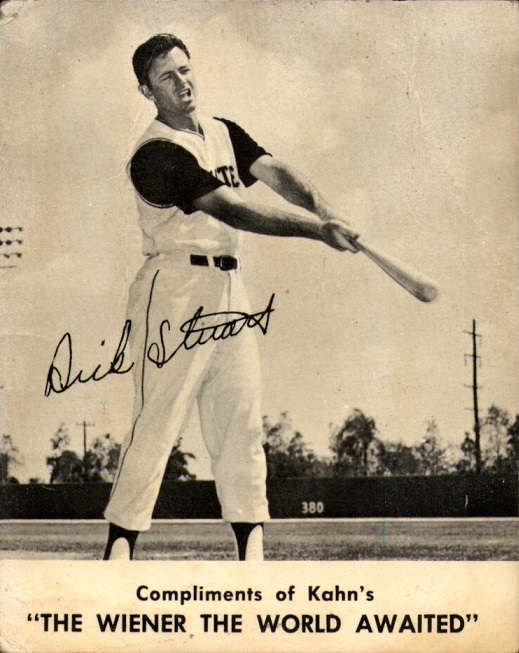 Let’s start with the photo. They used black & white photos on these cards and used staged action photos. I have no idea what is going on with the facial expression of Stuart, but he’s not really selling an action shot too well, especially without a hat. The cards had facsimile autographs and they featured players from the Pirates, Minnesota Twins, Cleveland Indians and Cincinnati Reds, with a total of 38 cards in the set. They are bigger than standard cards, measuring 3-1/4” by 4”. A lot of Kahn’s cards have wiener stains from being packaged together with the wieners, which is never a good idea for baseball card storage.

I’ll let you take in that company slogan at the bottom before we move on to the back of the card. 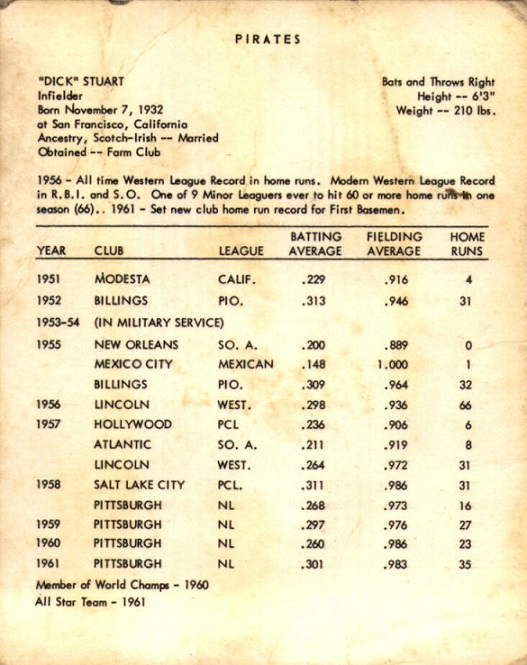 These card backs have a lot going on. First, it’s great that they included the entire career stats, though they went with three categories and one of them was fielding. In case you didn’t know, Stuart once hit 66 homers in a season in the minors. That was followed by 45 the next season and 47 in 1958, giving him a three-year stretch with 158 homers. That’s quite impressive, regardless of his level of play…though 16 of those homers came while in the majors.

The back also notes being a World Champ in 1960, an All-Star in 1961, his military service, and they included his ancestry, which I’m not sure you will find in other company’s set.  Part of his ancestry is “married”, which I’m just finding out was an ancestry back then.

If you’re interested in buying one of these cards, there was only one option on Ebay at the time that I wrote up this article. That price is just under $10 delivered. If you can find these cards without the wiener stains, you will pay a much higher price. A straight auction listing ended for $16 recently, so the current Ebay listing actually looks like a very good price. It has a best offer option as well.