Dick Bartell is part of one of the worst trades in Pittsburgh Pirates history. While it has died down due to all three players missing substantial time due to injuries, you’ll hear many new fans who don’t know any better saying that the recent Chris Archer trade was the worst in Pirates history. Possibly it HAD a chance, especially if all three players reached their peak, but that’s not going to happen anymore. Especially not in the day of free agency. The Pirates made some awful trades back when salaries were affordable for everyone and you just had the player until you cut ties or they retired.

That Archer deal has little chance now of matching how bad the Dick Bartell deal ended up. The Pirates were giving up a 22-year-old infielder with solid defense and a .300+ average in all three of his seasons for a light-hitting veteran infielder and a veteran pitcher on his last leg. Those two players had little chance of succeeding and they finished up with a combined -2.1 WAR over six seasons with the Pirates. Bartell put up 36.8 WAR over the next 13 seasons. To put that in Archer perspective, he had 1.2 WAR in two season with the Pirates. Clearly that is much better than -2.1 WAR in six seasons. The three pieces the Pirates gave up for Archer have 13.9 WAR in 11 seasons. One of them is already out for the entire 2023 season and another would be reaching free agency this upcoming year. Clearly that is much worse than 36.8 WAR in 13 years. Do you see why it’s not even a comparison? Oh, that’s all besides the point that the Bartell trade isn’t the worst in team history either.

We’ve established that Bartell was a bad trade, but we can also celebrate that trade by bringing him back for the Card of the Day article instead of mourning the poor decision making from 92 years ago today. Bartell made his name with the New York Giants. When The Sporting News presented their vastly underrated Conlon Collection sets, they had a photo of Bartell with the Pirates, so his 1994 card is a Pittsburgh Pirates card. Not only did I go with that one, I also chose the tougher to find variation for our Card of the Day subject. Let’s get into the card. 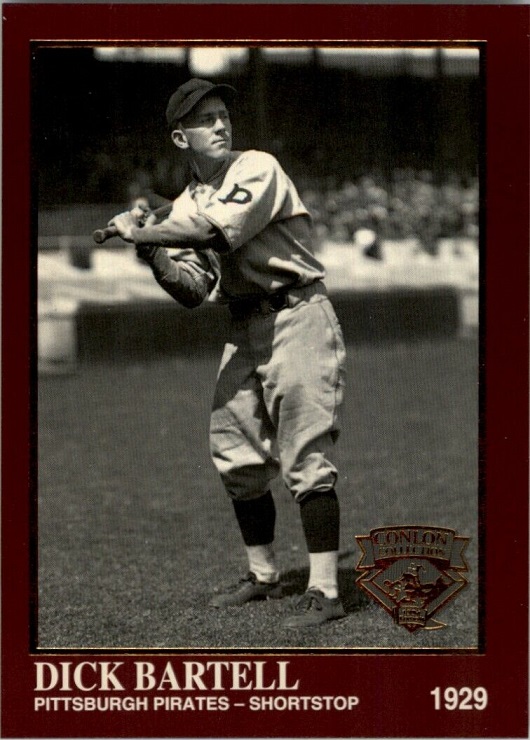 These Conlon cards have been featured here six times in the past, including a few recent posts. There are players who have no other card option showing them on the Pirates, so the set works well. The photo quality is also outstanding, so that helps. I really like the cards because of the black border look. However, you should be able to tell that the border above isn’t black. It’s said that they printed 200,000 of each card in this set with black borders. That’s obviously a lot, but 1994 was still the peak of collecting and almost everything back then was produced in large quantities. These cards are plentiful now, which isn’t necessarily bad unless you bought them as an investment potential. There are cards that are more collectible in the set, and it’s the ones with the burgundy borders. They only printed 10,000 of those sets, just 5% of the production of the black border cards. The burgundy cards have that foil logo in the bottom right of this picture, while the regular base cards in the set do not have a logo in the photo.

This card in the bottom right corner tells you that the photo was from 1929. That’s a nice identifier to have here because the Pirates uniform remained exactly the same during the four seasons (1927-30) that Bartell was with the team. It would be impossible to get more specific with the year by just looking at the photo, so adding the year is a nice touch. 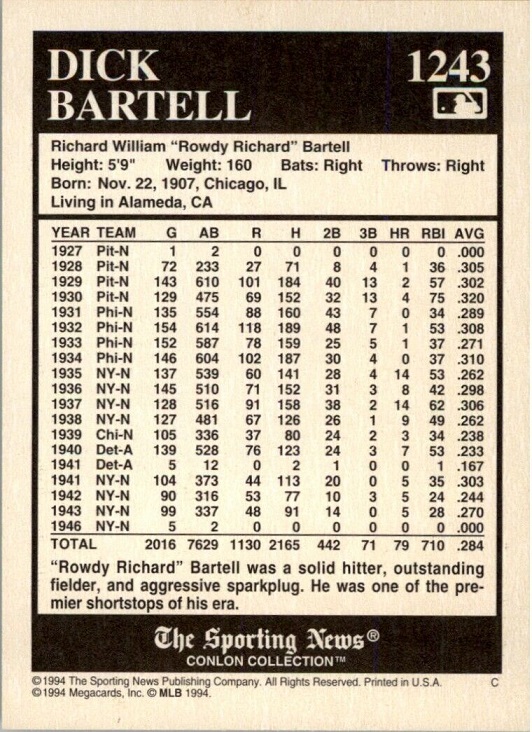 I mentioned that the Pirates were trading a solid fielder, but here’s a part of the trade I didn’t mention. They got Tommy Thevenow to improve the defense, then Bartell went on to become a career 15.7 dWAR player, including two seasons as the best defensive player in the National League at any position. The whole point of making the deal completely backfired, as the Pirates gave up hope that a 22-year-old could improve his defense. Thevenow played solid defense in 1931, but he quickly fell off and finished with 2.7 dWAR in five seasons with the Pirates. That’s not what you want from someone with a career .579 OPS and no speed, which is why he had -1.6 WAR during that time. I mention that to clarify that the back of this card isn’t wrong when it calls Bartell an outstanding fielder, but he was not at that point when he got traded. As a side note, he missed the 1944-45 seasons due to service in the war, so he may have been bordering on a Hall of Famer if he played those seasons.

If you want this burgundy card, it’s surprisingly cheap compared to the regular card, but you have one shot. Someone has it for $4 delivered, with a best offer option. The regular version of this card has about 30 options, and the ones with reasonable shipping costs are selling it for $2-$3 delivered.