Ralph Birkofer saw some decent mound time for the 1933-36 Pittsburgh Pirates, which was a large majority of his big league career. He did not have many cards during that time, so he’s not going to be a regular in our Card of the Day series. He has appeared here once for his 1935 Diamond Matchbook. His second appearance today features his 1936 National Chicle card, which was the only option for him on Ebay, outside of repeating the Diamond Matchbook set with a color variation. A site called Vintage Card Prices only has one other option listed for him, so maybe a year from today we will check out his 1934 Batter Up card. That set has the same issue that today’s Card of the Day has, which we will get right into below. The lefty throwing Birkofer was born on this date in 1908, so for the second November 5th in a row, let’s check out one of his cards. 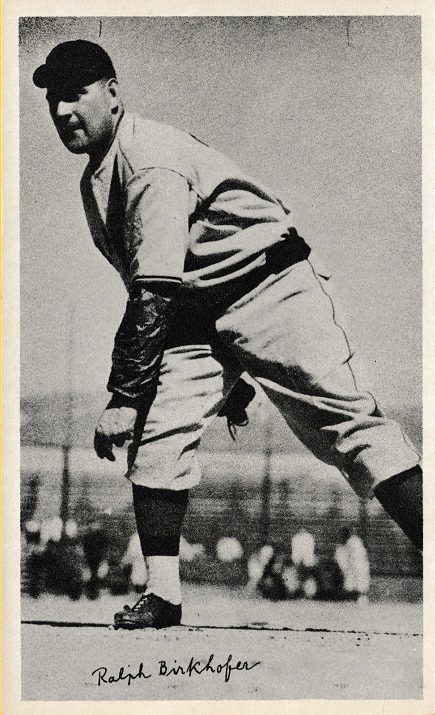 You might notice an error on this card right away. The good people at National Chicle added an H in the middle of his last name, which is a bit odd because I thought these were facsimile autographs. If that was true though, it would mean that Ralph Birkofer made the error. I mentioned the Batter Up card of Birkofer has something similar, and he’s identified as Birkhofer on that card as well. I did a search of his name on Newspapers.com after seeing the error for a second time and it showed that he was referred to as “Birkhofer” in about one out of every nine articles about him. The other eight got the spelling correct. That makes the card errors more fascinating because two out of three got it wrong. Obviously we are working with the tiniest of sample sizes here, but the odds were against two our of three companies getting his name wrong.

Even though these cards use such a simple design and have nothing on the back, I’m a fan of the set. They have cards of some players who have nothing else as far as real photo cards. They even included multiple poses of some players and you get some great “action” shots, such as this one of Birkofer releasing a throw. This particular card is also referred to as the Fine Pen set. We have covered the Wide Pen set from this same time and the names aren’t actual products, they describe the writing. Wide Pens have thicker writing, and the two different writing styles are easy to tell apart side-by-side. That is a name that was given to the set after it was released to help identification. These are bigger than your normal cards you get in packs today, measuring 3 1/4″ x 5 3/8″(sometimes they are referred to as premiums instead of cards).

I mentioned the error with his name, which is important to remember for buying this card. He has nine current Ebay listings and eight of them have his name spelled wrong, though you can hardly blame them for that listing. As a side note, how odd is it that this is the exact opposite ratio of what I found on Newspapers.com for Birkhofer/Birkofer? So if you want to look through options for this card, search “Birkhofer Chicle” to get the full results. There is one card priced very high in that group, while all of the others are priced between $15 and $55. The top end one is actually graded, an SGC 4.5, which adds to the price. It’s the only graded copy currently listed. You can get a nice one in the $20 to $25 range.