Today’s Card of the Day celebrates Dick Groat and his 1960 MVP award. Today is his 92nd birthday, so it’s a great day to feature the one-time Pittsburgh Pirates great, who should be inducted to the team’s Hall of Fame in the upcoming years. Groat  won the MVP during a season in which the Pirates won their third World Series title. It’s a season by Groat that gets under-appreciated in a way because I’ve heard people say that Roberto Clemente should have won the award.

The MVP voting used to heavily favor the playoff teams and wasn’t as much based on the comparison of best players each year. That’s more of a modern way of thinking. In other words, Mike Trout wouldn’t have seven total 1st/2nd place MVP finishes under the original voting ideas, since his team has made the playoffs once in his career. If you go by today’s standards, there’s no way Groat would have won the MVP that year. Whether you like one way or not, you can’t argue with the fact that the award has gone away from the original intentions. If you don’t like that idea, you’re basically saying that they were doing it wrong and now it’s right, which is definitely an interesting way to think (and I disagree completely with you).

Groat had the ninth highest WAR in the National League in 1961, BUT he had the highest WAR on the Pirates, which makes him the best player on the best team. Even with modern metrics involved, he is 100% who should have won the MVP award that year. Not only that, the second best player on the Pirates that season was Don Hoak and he finished second in the voting. One interesting side note is that Bob Friend had the highest WAR for Pirates pitchers that year (third best WAR on the Pirates overall) and his teammate Vern Law won the Cy Young. Clemente was fifth on his own team in WAR, one spot behind Law.

Groat is the one who got and earned the MVP card in the 1961 Topps set, so let’s take a look at that card. 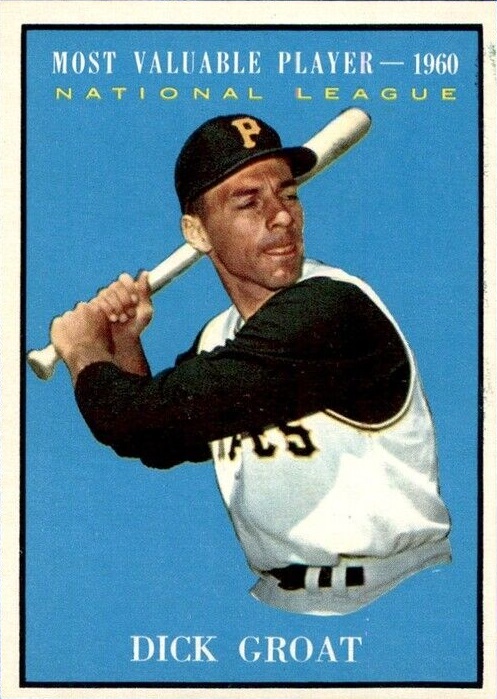 It was just a few days ago that we looked at a 1962 Topps card with floating heads and I mentioned how I hated that idea. I even suggested that there was no reason to cut out the shoulders/neck part because there was room for it on the card. I now realize that my suggestion wouldn’t have helped it that much. This card isn’t any less disturbing with the floating upper half of Groat on an all blue background. Who thought this was a good look? I do like the rest of the card, and I’m not a huge fan of the 1961 Topps design, which this card gets away from a little bit. They had me until they decided to cut off about 45% of his body and leave the rest floating. 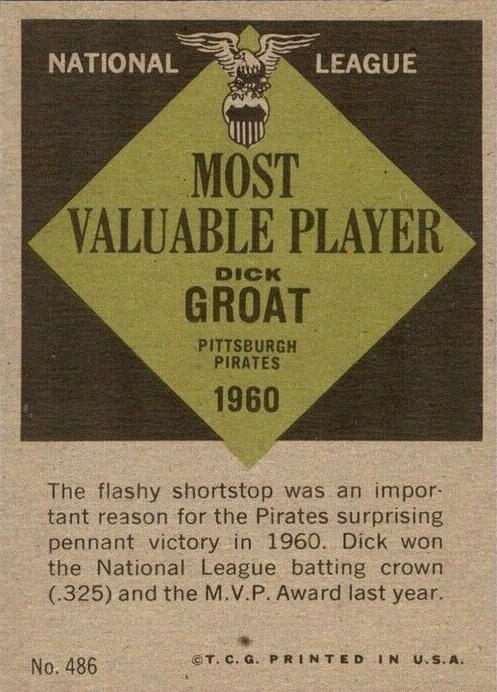 The look of the back isn’t bad here. I always enjoy seeing the National League symbol on old cards. This card called the Pirates pennant win surprising and I’ve been under the impression that they had a good shot at winning the NL crown from the start of the season. I’ve even read those predictions recently. It’s interesting that they had limited writing on this card and they chose to tell you that he won the MVP award…umm, you already told us that once on the front and with the symbol that took up half of the back. Couldn’t come up with anything else?  Somewhere there is someone reading this who is yelling “I wrote that 61 years ago for $1.25 an hour, leave me alone!”. I say to them that minimum wage was $1.00 back then, so you were overpaid.

If you’re interesting in the floating Groat card from 1961 Topps, you can find it on a site called Ebay, where sellers have it ranging from $50 for a PSA 7, down to $5-$6 for a decent looking ungraded version. There are six autographed copies that range from $14 to $42, which is a wide range and they are spread out throughout that range as well.