Today’s Card of the Day comes from an old reprint set of some very old cards. We have featured the 1886-1890 N172 Old Judge set here numerous times and I almost used it again today. In my opinion it is the best baseball card set ever made. There are many baseball players who have no other images of them available besides their Old Judge baseball card. It’s loaded with all-time greats and players who never even made it to the majors, with some players in the set having more than ten poses available. The cards are pricey, but it’s a set I recommend that everyone gets at least one card from for their collection.

If you don’t have the budget for a real Old Judge card, then the next best thing is a reprint from a set of 80 cards made popular by long-time collector Larry Fritsch, who had one of the greatest baseball card collections ever. He used to have a card store in Cooperstown that doubled as a baseball card museum. I bought my first Old Judge card from him and my first T206 card (the set with the expensive Honus Wagner card). Fritsch produced many reprint sets and these Old Judge reprints were for sale in his catalogs for many years.

While this set of reprints only gave you a glimpse of the massive Old Judge set, one of the cards he decided to include is perfect for our Card of the Day article. It features pitcher Jim McCormick, one of the best players in baseball history who isn’t in the Hall of Fame. He put up 76.2 WAR in ten seasons in the majors, then quit at age 30 to run his own business. If he stayed on for another two years, he would have been put in the Hall of Fame 50+ years ago because he would have had 300 wins. However, he has more WAR than five 300-game winners McCormick appeared in this series a year ago today on his 2014 Goodwin Champions card. That set also borrowed from the Old Judge set. Here’s our second look at a card of Jim McCormick. 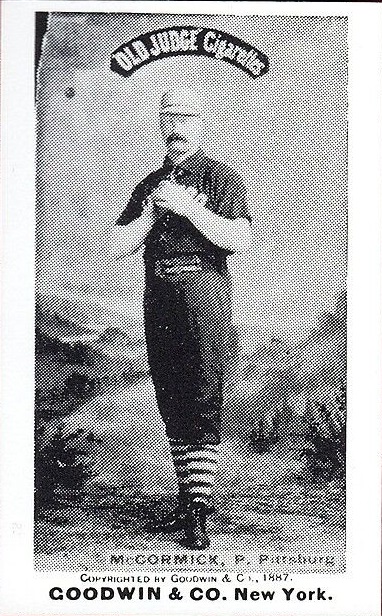 These cards used black and white photos of Old Judge cards, which are sepia tone in color. The reprint then put a white border around the card, with the Old Judge ad information added to the bottom. That photo of McCormick provides an interesting case study of the set. He was traded to Pittsburgh in April of 1887, and even though Spring Training started a month earlier, he was never with Chicago at the time, but that’s a Chicago uniform. He was in Boston at the time that he was acquired by Pittsburgh. We know that the 1887 Pittsburgh photos were taken in mid-May, and he was with Pittsburgh at the time, but the Old Judge people already had his photos, so they didn’t take new ones. That probably means that McCormick’s photo was taken in 1886, and was one of a small group of photos taken for the set at an earlier time, possibly like a test market to see how well the cards would do. That would help explain why some of his cards say Pittsburg (no H) and some don’t list a team. 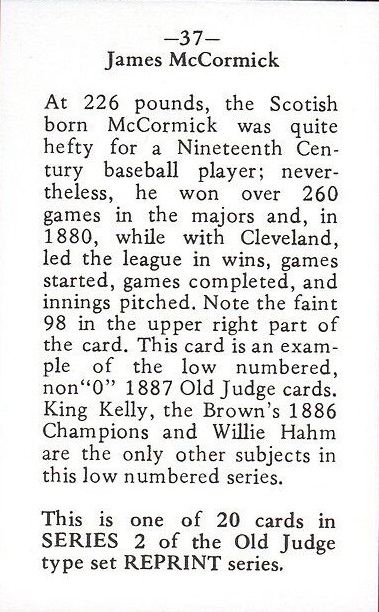 The original Old Judge cards were all blank backs. Sometimes people wrote stats and bio info about the players on the back. Other people completely removed the photo from the backing (they are called “skinned” cards). The reprint set included a brief bio on the players, and in this case, also on the Old Judge set, with a fun fact that definitely needs much more explaining. The short version of the story is that some cards in the set have numbers on them that were scratched into the negative and appear on the cards. Most baseball players have numbers that start with “0”. The short number cards are mostly actresses and boxers. McCormick is in a small group of baseball players in the set with numbers that don’t start with 0. We already know that a group of those photos were taken in 1886, while the three others mentioned all lean towards being 1886 photos as well.

There is only one of these cards on Ebay and the seller wants $7, with more than half of the cost being shipping. You can actually get the entire 80-card set from the Fritsch cards website for $26, plus shipping. That’s a lot cheaper per card and a lot cheaper than any Old Judge card you can find. Even the lowest grade copies go for $100 or so for common players. If you wanted a Jim McCormick card, you’d probably pay over $1,000, as his cards have gone up in price recently.