There’s something about playing one game for the last World Series team in Pittsburgh Pirates history. Sure, they could win another title, but it’s been a while and baseball doesn’t exactly play on a level playing ground without a salary cap. The longer it’s been since the 1979 title, the more interesting the players on that team become to me.

In that group of 34 players used that season, there were two played who got into just one game. Rick Rhoden played just one game, but that was due to injury. He also had a decent amount of big league time before that year, and he had a nice career after that year. Then there was Gary Hargis, who got to pinch-run in his only game. He was with the team for 30 days during the regular season. The Pirates battled for the title down to the final weekend, so they were going with their regulars. The September call-ups saw very little time as a group. It could have been worse for Hargis. Harry Saferight was with the Pirates for 30 days as well and he didn’t get to play. That ended up being his only big league time, so he didn’t get an entry into the baseball encyclopedia. He was one of three September 1st call-ups who failed to get into a game, but the other two, Rod Scurry and Jim Willoughby, both had solid careers outside of the 1979 season.

What seems like a bit insulting, but was standard for the time, was the World Series splits for the players. While guys like Willie Stargell, Ed Ott, Dave Parker and Phil Garner were getting almost $29,000 for their year-long contributions, which was more than minimum MLB salary at the time, Hargis and seven others got $250 (it was called a cash grant). If a guy got called up in 2022 for the final 30 days of the season, he would probably get a 1/2 share of the playoff payouts, which is a lot more for World Series winners now. He would be much better off financially than Hargis and Saferight were for their 30 days/playoff split in 1979. That being said, the pinch-running appearance for the World Series winner made Hargis much more famous now than if it happened in 1978 or 1980.

That’s a long intro for a Card of the Day article, so let’s get right into this offering from TCMA in 1976, showing Hargis with the Shreveport Captains of the Double-A Texas League. 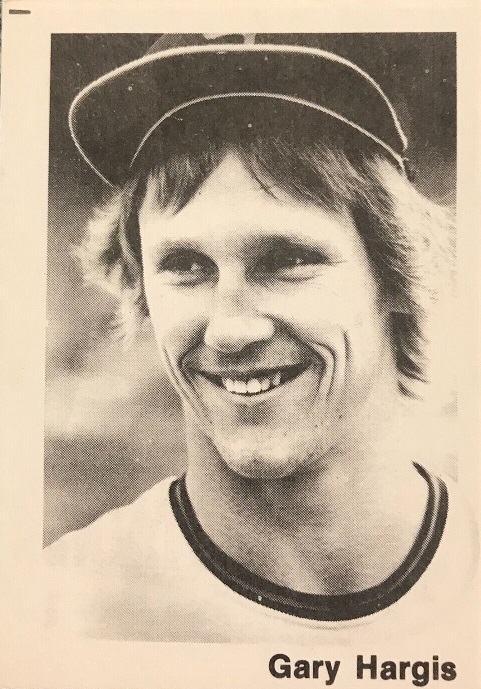 When I was scrolling through options on Ebay to use for Hargis, I was just looking at the tiny thumbnails and not reading the auction listings. I saw this card and didn’t even realize it was a card at first. I only ended up on it because I couldn’t find a back scan of the one I wanted to use. Hargis has appeared in this series once before, and not coincidentally, it was one year ago today on his 65th birthday. That auction looked at his 1980 TCMA card. By 1980, TCMA was printing a lot of minor league cards and they were better quality. In 1976, there weren’t many options. As you can see from this card of Hargis, they also didn’t go all out with the design. After all, it was 1976 and they still went with a black & white photo. It had no border around the photo itself, and a white border for the card, with the only writing being his name. The details were on the back and they don’t give off the thought that they took a lot of time with the design either. 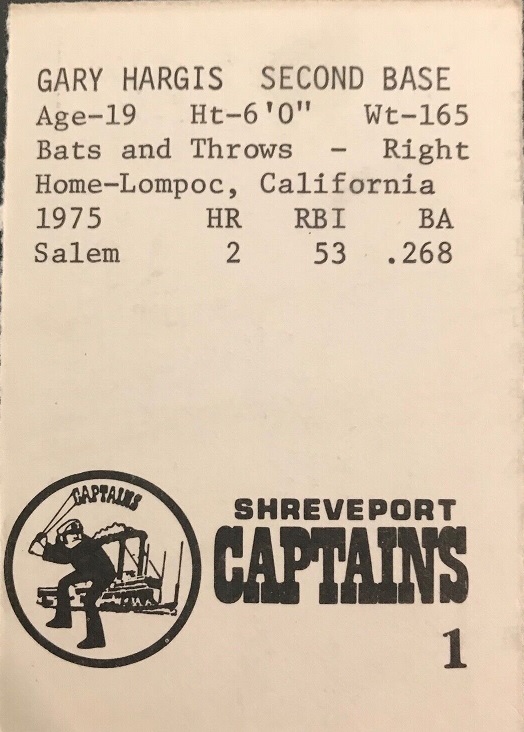 This back looks like it was done on a typewriter on the actual card. You get just the triple crown stats for one year, along with some brief bio info and then the team name and logo at the bottom. Not a whole lot to look at here. Hargis was card #1 in the set and I don’t know how they came up with the numbering. Usually it is alphabetical in the minor league sets, but this set seems just random.

These cards are odd for pricing. The low quality of product keeps the price down UNLESS it is a top player, then the price is high because they are hard to find. Only one seller has this card for sale individually and they are trying to sell every card from the set for $7 each delivered, but they come with a best offer option and I’m sure you could get it cheaper if you really want this card. I think there’s a better option though, if you are actually interested. There’s a seller who has the entire set of 23 players for $25. It’s not a great set, with Rod Scurry probably being the most desirable card. Tim Murtaugh was the manager and he’s in the set. You would also get the previously mentioned Harry Saferight, as well as a few other lesser known players who made it to the majors. It’s much better than overpaying for one card.