There’s an old saying about terminating two flying creatures with one projectile. Today we will increase the carnage to three by featuring three former Pittsburgh Pirates for the first time. Thanks to the magic of Topps in 1962 with their choices for card #598, this will be the first appearance in our Card of the Day series for Howie Goss, Manny Jimenez and Al Luplow, all outfielders for the Pirates during the 1960s.

Today’s card features a total of five players, with the best one being All-Star outfielder Jim Hickman. It also has Ed Olivares, outfielder for the 1960-61 St Louis Cardinals, who just passed away two weeks ago at age 83. While he never played for the Pirates, he has a connection to the team. His son Omar Olivares pitched for the 2001 Pirates. The focus today will be on the three Pirates players, with the reason this card is being used today is because Howie Goss was born on this date in 1934. So here’s a look at his rookie card. 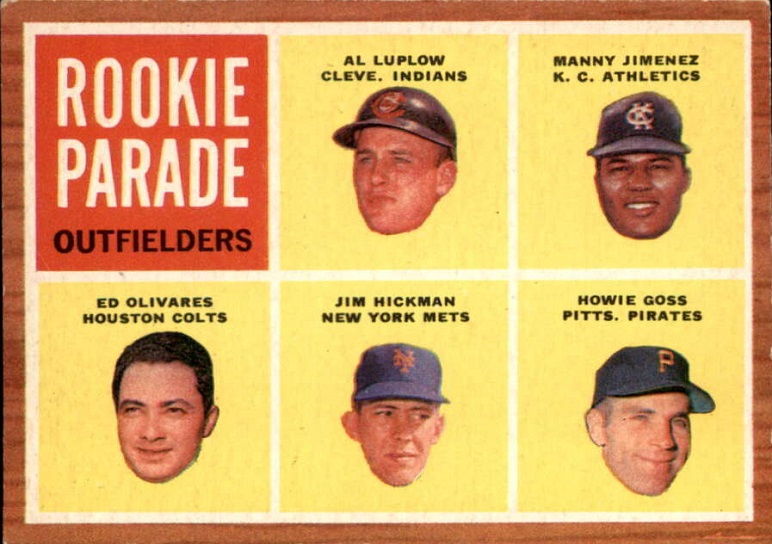 I tried to pick out a creepy looking card yesterday for Halloween, but there’s not much about baseball cards that is creepier than the floating head idea utilized often by Topps. It’s such a strange idea and totally unnecessary in this instance. Why couldn’t these players keep their necks and shoulders? As much as I love the look of the 1962 Topps set, these Rookie Parade cards are definitely at the bottom rung of the set, taking away much of what makes the 1962 set so desirable, by limiting the wood-grain borders and getting rid of the curled up photo look, all so we could have floating heads and lots of yellow.

Despite those facts, this is a card that I need to get (probably right after I’m done writing up the article) because of Goss, Luplow and Jimenez all being on the same rookie card. It would have been nice if Luplow and Jimenez were with the Pirates at the time, but they wouldn’t have all been on the same rookie card if that happened, so you take what you can get here. Hickman being an All-Star and Olivares being the father of the Pirates player adds intrigue that wasn’t even necessary. I was already sold on the card. 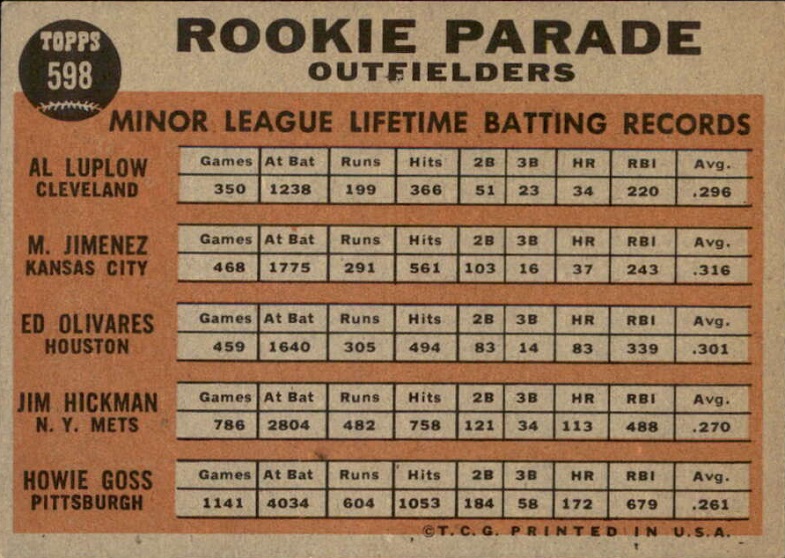 The backs here tell you the minor league stats of each player and nothing else. If you were using these stats, and just these stats, to try to figure out the most intriguing prospects here, it would not work out the way they finished their careers. If players are featured here, they had to be close to the majors, or possibly have some big league experience already. Clearly Luplow got to that point in a hurry and he was successful doing it. Then Jimenez and Olivares took about a year longer and they too had success in the minors. Hickman and Goss have more games and lower averages, so you would assume they were both older.

As it turned out, Olivares never played in the majors after this card came out, his two partial seasons (1960-61) were all he had to his career. Goss also played two years without much for results, so that part played out. Jimenez and Luplow had decent little careers, nothing special, but they put in their big league time. They were teammates in the outfield with the Pirates in 1967, then Jimenez stuck around for the 1968 season. Hickman put up 13 WAR in 13 years, so he wasn’t a superstar by any means, but if you play 1,421 games and make an All-Star appearance, you had a very good big league career. There aren’t thousands of people living or dead who could have claimed to play that long in the majors, with an All-Star appearance to their credit. There aren’t even 900 players who played 1,400 games.

I mentioned that I would probably buy one of these cards, but they are not cheap unless you go low grade. That’s because these cards are high numbered cards, which were printed later in the year and in limited numbers. In fact, the set had 598 cards, so this was the last one in the set. The first and last cards in the set are usually harder to find in better shape because of storage reasons, one with relating to always being the card exposed to either light or surfaces, the other being that cards were often stored with rubber bands and the rubber bands would do the most damage to the top and bottom cards.

This card is listed as high as $585 for a PSA 7, and as low as $53 for an ungraded copy. You are probably better off waiting for straight auction listings, as it tends to end cheaper, but you’re not going to get anything nice for under $20 delivered. You should budget about $30 if you just want a decent collector grade copy.