To include a special player for Halloween in this series, I had to use a card that didn’t show him on the Pittsburgh Pirates. I thought about using Spook Jacobs or John Candelaria for today, but Jacobs didn’t have any Pirates cards either during his brief time with the Pirates, and the Candy Man has been featured here quite a few times already. I decided to go with Bones Ely instead. He played shortstop for the 1896-1901 Pirates (the team name was changed to Patriots in 1898 to be technically correct).

Not many people knows that when Honus Wagner joined the Pirates before the the 1900 season, the greatest shortstop in baseball history wasn’t a shortstop. It was Bones Ely manning the position through the mid-way point of the 1901 season for the Pirates. Ely had a 14-year career in the majors, where he was an average hitter with above average defense. He’s a name that should be a bit more well known, especially today on Halloween.

Ely actually has two options for this Card of the Day feature that show him with the Pirates, but try as I may, I could not find scans of either. That’s not 100% surprising, as both sets are extremely rare and from the 1890s. Maybe next Halloween we will see him with the Pirates. I actually think today’s card choice fits the day better, as it definitely gives off an Edgar Allan Poe type of vibe with the old slightly faded photo of a man staring blankly into a camera with nary a sign of smile on his face.

In 1990, Target put out a set of cards celebrating 100 years of the Dodgers. It’s a misguided number, as the Dodgers not only existed before 1890, they didn’t have the name Dodgers until years later. It’s the same as if the Pirates putting out a 100 years of Pirates set in 1987. However, I will not mock the set, as they got some rare players on cards. One of those being this card of Bones Ely. 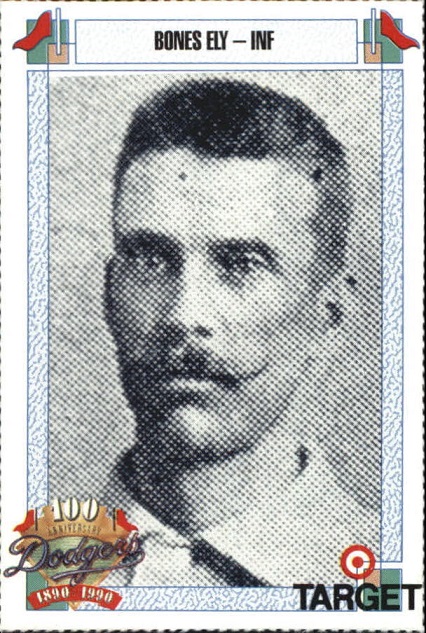 Ely gives off more of an 1880s western gunslinger vibe than a baseball player here, especially with a bullseye/Target placed in the bottom right corner. I definitely got a creepy Halloween vibe when I found it. If you search some other baseball photos of him, he gives off the baseball player feel too. His real name was William, but standing in at 6’1″ and 155 pounds, you can probably guess where the “Bones” nickname came from. I’m not really a big fan of the look of this set, but I do appreciate the work they did to put it together, and the cards like this one are just great to have available. Trying to get an actual card of Ely is almost impossible, regardless of financial status, as you would need to find someone willing to sell one of the few that exist. 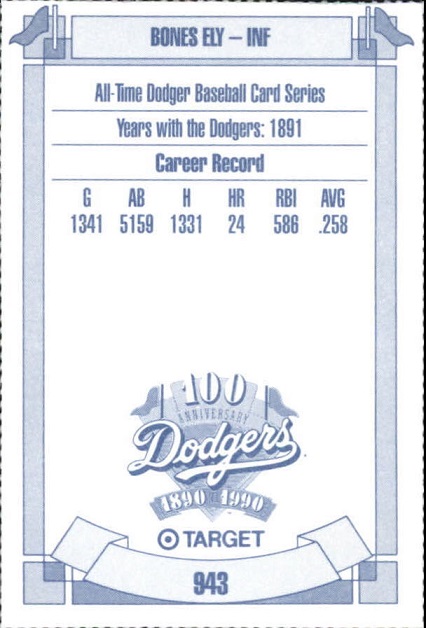 Nothing really special or noteworthy on the back. No Halloween vibe being given off here, other than they stayed with the nickname on the back. You get six career statistical categories and they tell you the year that he played for the Dodgers franchise. He played for eight big league teams during his career, but more than half of his games came while he was with the Pirates.

If you want this card, there is one option on Ebay right now. The seller is asking $1.25, plus $3.99 shipping. Your other option is buy the set or just the series with Ely, which is significantly cheaper per card, but might not be something you want if you’re just collecting Pirates cards.