Lee Tunnell had an impressive rookie season in 1983 with the Pittsburgh Pirates, just two years after he was drafted in the second round out of Baylor University. He made a brief appearance for the 1982 Pirates, not much more than a year after the day he was drafted. Topps was the only company of the major three to include him in their 1983 set. Tunnell didn’t get a Donruss or Fleer card until 1984, and by that time his stats looked like those of someone who could be a fixture in the Pirates rotation for quite some time.

Tunnell himself didn’t give off that vibe of a big league star, with a very slim frame and big glasses, looking like he would have trouble with security in road cities believing that he was a baseball player. He had one big season though, and today’s Card of the Day peaked in popularity around the time it came out, though the set itself was extremely popular for a time. Here’s a look at card #592 from the 1984 Donruss set. 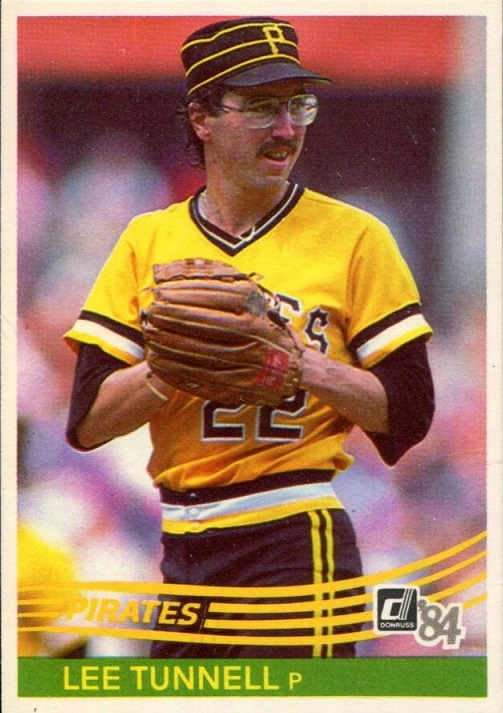 I feel like I’m doing Tunnell a bit of a disservice here because he went without glasses for a time, and he grew a beard for a time too, which can both be seen on other cards. The beard helps him fill out a bit, while the no glasses look fits more into an athlete look, though obviously a slim frame and glasses didn’t hurt Kent Tekulve any.

Tunnell was listed at 6’1″, 180 pounds, and that weight might be a little generous. I liked the uniform look on this card, with the gold top, black pants and black pillbox cap. You just can’t beat that look. The 1984 Donruss set didn’t have a great design by any means, but they didn’t print as many cards as Topps or Fleer, so it became more popular. That was especially true when Don Mattingly became a star. An old price guide I bought not long ago tells me that his cards (which was his rookie) were going for $100 each for a time.

Tunnell’s card was popular, though obviously nothing close to those standards. He went 11-6, 3.65 in 177.2 innings as a rookie for the Pirates in 1983. Just 22 years old at the time, it seemed like a bright future was ahead. He picked up just ten more big league wins over the rest of his career, so that peak time of his career was very brief. 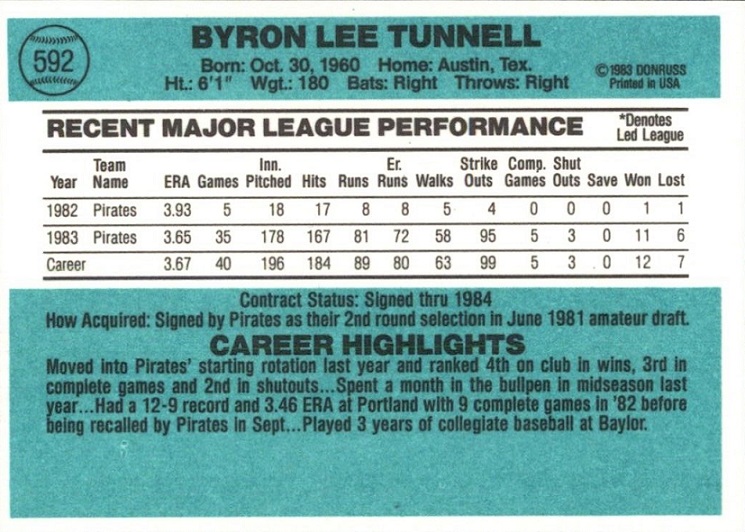 By 1984, Donruss had settled nicely into their boring back designs, where they included limited stats and kept the same exact setup for ten years, using different versions of yellowish orange and blue for the back colors. Tunnell had almost no minor league stats, so they could have included them here and still had room for everything else. As always, I have to give a hat tip to the contract status section. I have a subscription to Newspaper.com, which has all of these papers available throughout baseball history, including a ton from the 1980s-early 90s, and there have been plenty of times where a Donruss back answered a contract question I couldn’t find anywhere else.

If you’re interested in this card, you have plenty of options. The top scan is actually from one graded PSA 10, which is a straight auction that won’t be around by the time this article posts. I had to use a different back scan due to the angle of the photo, though I noticed the quality control on the backs of these cards was pretty low. A bunch of them were not printed straight, so the scan looks crooked, but it’s actually the printing. The next four highest priced cards after the PSA 10 range in price from $9 to $18, and all of them are autographed. However, there are five other autographed copies for even less, one under $5 delivered. If you just want the card, you can get it for $2 delivered. In fact, one person has two for $2 total, so you can share one with a friend.