Today’s Pittsburgh Pirates Card of the Day gets the word “card” in quotes because it’s actually a sticker. In 1981, Topps put out a sticker album and issued stickers in packs. Those packs came with four stickers each and cost 15 cents. A full box of packs contained 100 packs, so it was possible to grab 400 stickers at one time for $15 (possibly less if they offered a full box discount). The full set contained 262 different stickers, giving you a decent chance to get the entire set with a box purchase.

If you attempted to fill the sticker album back then, you probably ended up with a lot of doubles, which explains why you can still find these stickers in quantity today. I saw some unopened packs during a quick search on Ebay, including a few people who have full boxes. The albums are for sale too, so it’s possible to live like you’re in 1981 and try to put together a full album. You would lose some value doing this, but stickers don’t have high prices 41 years later, so I think you would be fine with the small financial hit suffered in the name of fun.

Jim Bibby appeared here exactly a year ago, which is no coincidence. He was born on October 29th, so we celebrate him today. Only one other player born on this date has a card option (literally one option), but I felt a year is a long enough wait between appearances by Bibby. He played for the 1978-81 and 1983 Pirates, helping the team to their fifth World Series title. Between the 1979-80 seasons, he combined for a 31-10 record. He also had a 2.08 ERA in 17.1 postseason innings in 1979. I’ve used two other cards of Bibby and picked 1981 both times, so I decided to stick with the same year and look at this 1981 Topps sticker.

Here’s the front of the “card”: 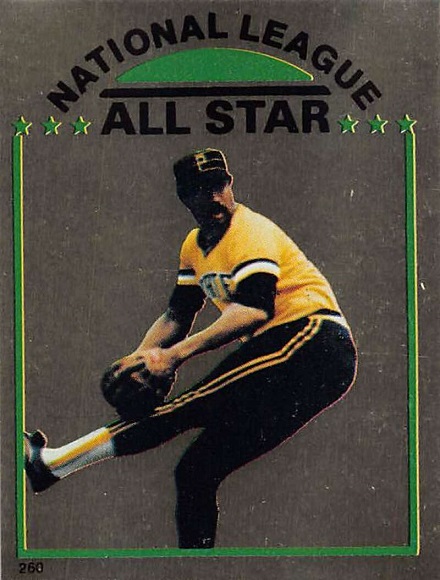 This is not what a majority of the 1981 Topps stickers look like. The All-Star stickers got a silver gloss and red border for the American League players and the National League players got a gold gloss and green border. I know this scan looks a bit silver (gray might be a better description) but if you find other scans of this sticker with better lighting, you will see the light gold color gloss. I wanted to show Bibby better in the scan, but here’s a low quality scan I found where you can see the true coloring better. 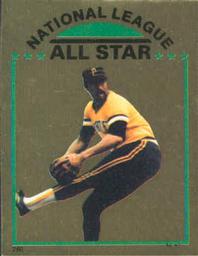 Going back to the original scan, you can see “260” in the bottom corner, which was the sticker number. The album is set up strange in that it looks like it only held the first 240 cards in the set. If you turned to the first page, you would see that each empty space designated for a sticker was numbered and it started at #1 through #8. Then if you flipped to the back page (the San Francisco Giants team page), you would find sticker numbers 233-240 went on that page. However, the 22 gold/silver foil stickers numbered 241-262 were put in the middle of the book, so they actually went out of numerical order in the album just for the All-Star stickers. Bibby also has a regular sticker in the set, which is #216.

Here’s the back of the “card”: 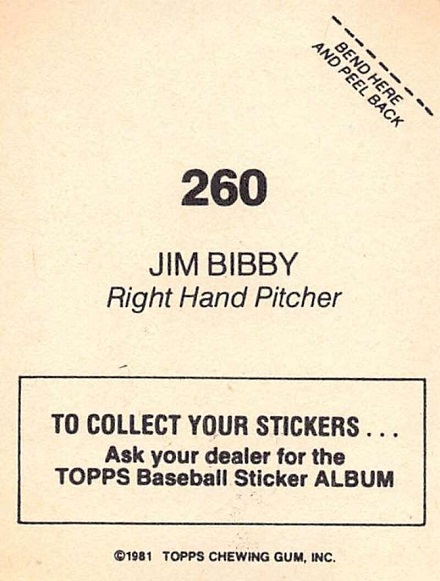 The back is simple and really wasn’t meant to be saved, so they didn’t go into much detail. You got the player’s name and position, as well the number. The foil ones are higher quality/thicker than the other 240 stickers, which have plain white borders. The back still has the note to ask dealers for the sticker albums, which used to sell for 25 cents. Now they got for about $8-$10 each.

If you’re interested in this sticker, there are a few choices on Ebay right now. The cheapest one is about $3 delivered and the most expensive is $6. There’s one other auction that really stands out. One seller has large groups of these stickers sorted by player, with what he describes as 200+ Bibby stickers for approximately $11 delivered, though there is a best offer option, so it could actually be cheaper