Today’s Pittsburgh Pirates History article has updated/extended bios for eight former players born on October 28th. You would think that would give me plenty of options to match up for this article subject, but that is not true. I basically had to choose from Nate McLouth and Bob Veale. I remember how McLouth big league’d the media during Spring Training after he left the Pirates because he was mad that he was replaced in center field by a much better player (Andrew McCutchen), so we are taking a look at a card from Bob Veale today. Even without what McLouth did, Veale is a much more important player in team history and it has been over a year since he has appeared in our Card of the Day series. Basically, he was due for an article, so I didn’t even have to explain the McLouth decision.

I landed on the 1969 Topps card for Veale for today. I already used his 1972 Topps card in this series, which is my favorite card for him. The 1969 Topps set is among my least favorite designs and it doesn’t help that they used pink on the Pirates cards. It’s not as overwhelming as the pink that ruined the 1965 Topps set for me, but it’s still there for no reason. I went with this particular card because of the jacket being worn by Veale, plain and simple. So here’s a look at card #520 from the 1969 Topps set, featuring one of the best strikeout pitchers in team history, Bob Veale. 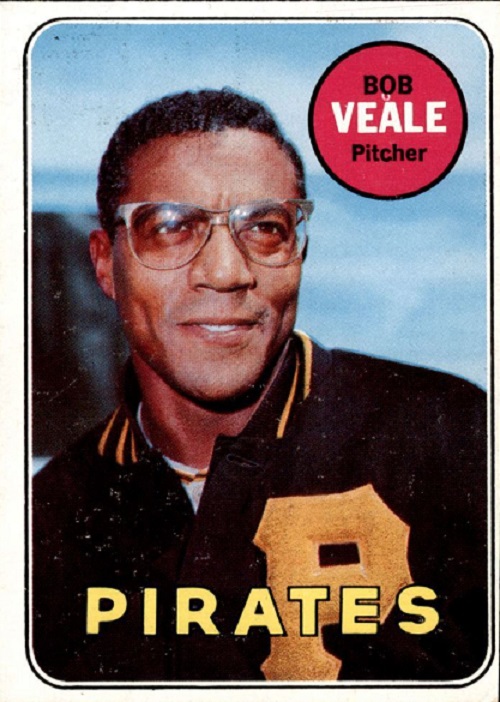 Look at that old school jacket. I need one of those in my life. This card almost looks like someone going to a high school/college reunion years later, still wearing their varsity jacket. If you saw one of these jackets, even though it has Pirates colors/logo, you might think it was for some school. due to the size of that “P” on the chest and lack of other identifiers in the picture. I still want one though.

Anytime I see the old photos like this one, I know this was one trade by the Pirates away from being cropped at the shoulders and then it would work for his new team, regardless of what team acquired him. Possibly that comes with a little bit of team colors airbrushing of the uniform that barely makes it into the photo. It’s the lack of a hat that really gave me that thought, like they were covering their bases just in case.

This particular scan is a little darker than some others, but that part with his name is a dark pink. It looks like it could be red here. The “Pirates” part at the bottom looks like they matched it up to the team, but they went with yellow for every team in the set. 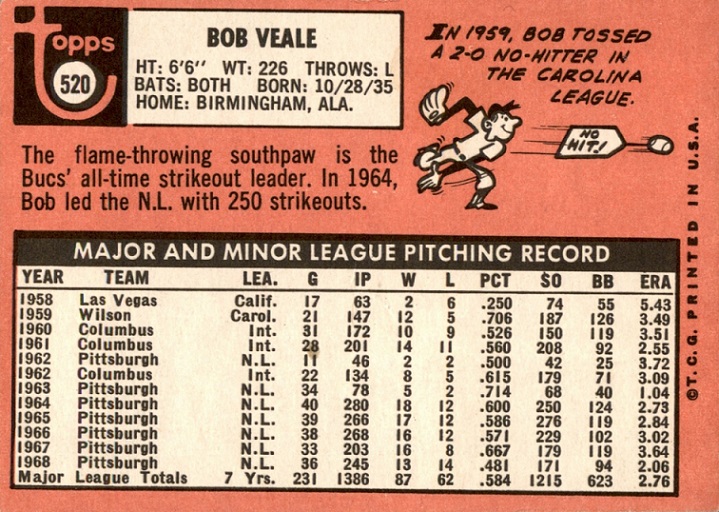 The back of 1969 Topps went with a pinkish color too, not sure what you would call it, but it’s not a bad choice because it’s a brighter color and it makes reading the words easier. Some years they went with darker colors and the backs are really tough to read, but this is a good one. I like that they gave you all of his pro stats here, not just the big league time. We see Generic Gray Topps Man throwing a famous parachute ball. He couldn’t even put on glasses for the role of playing Veale? The man who looks like no one ever is still dressed like he just got done playing Freddie Patek on another card. How about growing a foot taller and putting on glasses? I digress.

Are you interested in this card, but you don’t know where to go or how much to spend? Good news, I can help you. There’s a magical interwebs place called Ebay, where they have around 100 examples of this card for sale. The most expensive is right around $100 for a PSA 9, but there are multiple PSA 8 cards for around $20-$25. There are multiple autographed cards in the $20 area. There are lower grade copies under $3, but you probably want to be around $5 for a nice looking (ungraded) copy. Happy collecting!