While looking over the list of Pittsburgh Pirates players born on October 27th, I decided to feature Mike Dunne is today’s Card of the Day article. I knew right away which card I wanted to use here, but I was surprised at the amount of options that came up for my search.

I’ll explain below why I wanted to use the regular 1988 Topps card for Dunne. I searched Ebay for “1988 Topps Mike Dunne”, knowing that two cards would show up. What I didn’t know was that plenty of others would as well. The 1988 season was a big year for card sets being produced and Topps went all in, sometimes with other companies. I knew today’s Card of the Day would show up, along with a glossy rookies card that was an insert in rack packs. Topps also put out an All-Star glossy set that was a set you had to send in to the company to get the cards. Then they came out with a mini leaders card set, which are great sets that I think are under-appreciated. They didn’t just make one mini set though, one was released only in Britain and it looked different than the other set. Not only did they have mini sets, Topps put out a big set, which were horizontal layout cards similar to 1955-56, which were bigger than the normal cards. Topps also combined with Rite-Aid and Toys R Us to put out sets, plus Topps made their own stickers and metal buttons (called caps). My seemingly simple search turned into ten choices and Dunne is in every set.

As I said at the top, I knew right away which card I wanted to use, and I stuck with my choice despite the options. I might have to circle back to some of these sets soon though, because not all of them have been featured here. So here’s a look at card #619 from the 1988 Topps set, featuring rookie pitcher Mike Dunne. 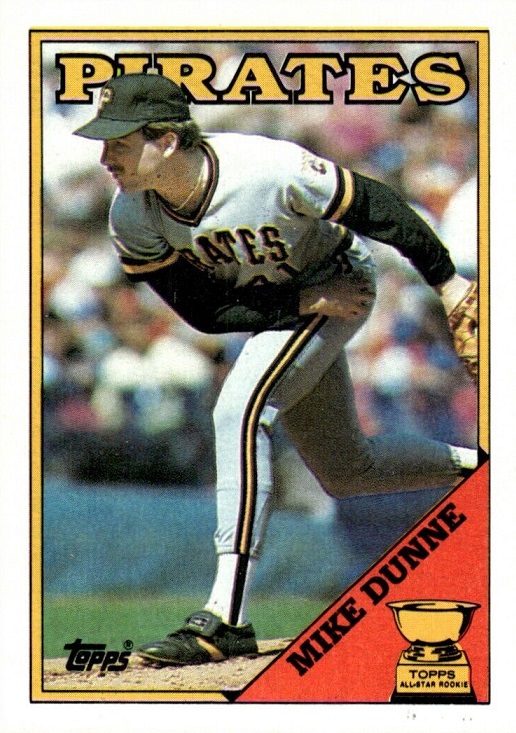 I picked the regular 1988 Topps card because Dunne was named to the Topps All-Star Rookie team, which earned him a special trophy on his card. Topps used those trophies for many years during their earlier cards, starting in 1960 and running through 1973, bringing them back in 1975-78, then once again including them on cards starting in 1987. A total of ten players had trophies each year, with pitchers getting one each for right-handed and left-handed pitchers. Dunne got his for going 13-6, 3.03 in 163.1 innings over 23 starts, with five complete games and one shutout. He finished second in the National League Rookie of the Year voting to Benito Santiago, who received all of the first place votes.

Unfortunately for the Pirates, Dunne’s success was fleeting. He won 25 games total in his career, with more than half coming during his rookie season. He was part of a great trade in team history, with the Pirates moving on from All-Star catcher Tony Pena at the right time, while bringing in Andy Van Slyke and Mike LaValliere. Granted that the Pirates had to sign Van Slyke away from free agency to really make it a one-sided deal, but I’m sure it helped tremendously to have him in place before he reached free agency. 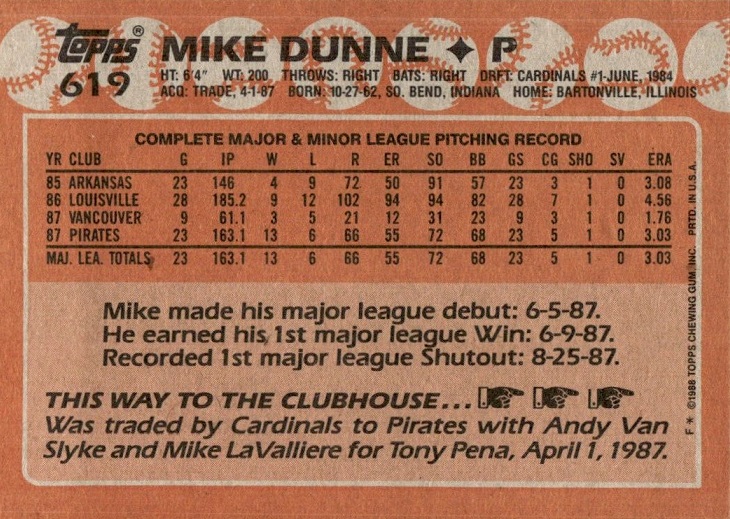 The 1988 Topps set had a decent look on the back. I like the baseballs in the background across the top, and the fact that they included his full pro career instead of just the big league stuff (I’m looking at you, Donruss). You get some fun facts about his rookie season. The shutout fact turned out to be his only Major League shutout, not just his first. They also let you know how he got to the Pirates. Check out that ERA in the hitter-friendly Pacific Coast League (Vancouver), which helped him get to the Pirates quickly.

If you’re interested in this card, it’s plentiful and cheap, with numerous options around $2 delivered. The noteworthy ones are autographed and got for either $7, $15 or $20, whichever you think is the cheapest out of that group. That’s also a neat printing error that really wouldn’t get you all of this card. Topps mistakenly let out some blank front cards. It’s an interesting card, but all you get is the back, so you would still probably want another example if you bought that one. That one is about $9 delivered.