Today’s Card of the Day comes from the 2006 Upper Deck set, which has not been featured here before today. I didn’t purposely ignore the set up until this point. I also didn’t pick it today just because it hasn’t been here yet. I picked it the same way our forefathers picked Card of the Day choices in the 1800s, by scrolling through Ebay until I found a card that caught my eye.

Marty McLeary pitched five games for the 2006 Pittsburgh Pirates, then stayed around for 2007 to make four more appearances. He pitched a total of 25.1 innings with the Pirates, as part of his big league career total of 29 innings over three seasons. The rest came with the 2004 San Diego Padres. McLeary, who is somewhere celebrating his 48th birthday today, didn’t appear on a lot of baseball cards, though he does have some minor league cards to help boost that total.

McLeary’s 2006 Upper Deck card stood out when I scrolled through Ebay for a card, and I just happened to land on the gold variation of the card. It helped that the gold card didn’t use the generic scan Ebay provides for common cards. I’ve had to use a few of those recently and the scans have been lower quality on their site for the last 2-3 weeks. In fact, the back scan for today is one of those shared scans and it’s not the best quality, but it was the only one available. Here’s a closer look at the gold variation of card #1162 from the Upper Deck set. 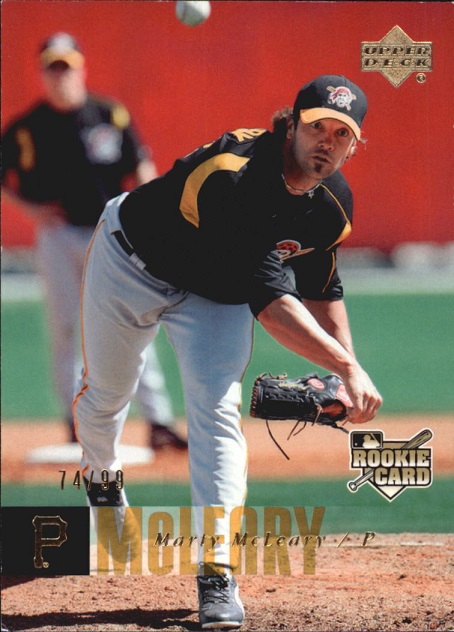 If you saw that card number above and wondered if it was a mistake or an odd way that Upper Deck numbered the cards, I can assure you that neither of those things are true. Upper Deck released this set in three series and there were 1,250 cards in the set.

This is a nice quality photo of McLeary just as he releases a pitch, wearing those 2006 uniforms that I hope they don’t bring back, but I’ll settle for them if they bring back that logo. Anything is better than the boring current “P” logo. Upper Deck went with the borderless look this year. I’m a fan of the design here. I don’t mind the “P” logo in general, but it can’t be the only logo. It looks good on this card in the bottom left. I also like how they laid out the last name, then put the full name over it. The rookie card stamp looks good, and the gold foil upper deck stamp is small and doesn’t interfere with the picture here. Just above McLeary’s name, you’ll see “74/99”, which is to tell you that they made 99 copies of the gold version and this is #74. 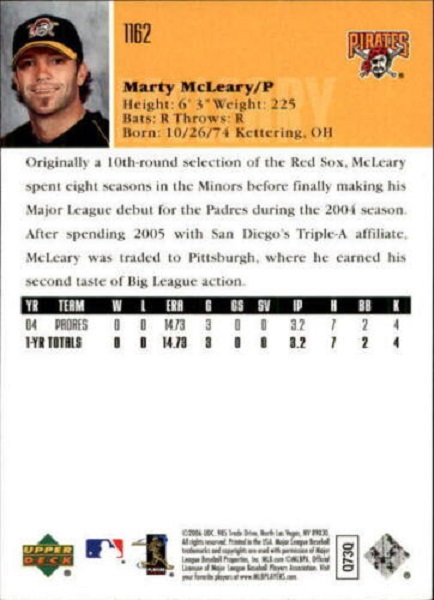 I already mentioned that the photo quality here isn’t the best and you can see that in the scan, but you still get a feel for the backs of these cards. I like that they added the Pirates logo and kept the team colors as part of the design. They also included a second photo much different than the front photo. There’s a little bio section with some background of his journey, but then Upper Deck decided to just use his big league stats, which left plenty of blank room at the bottom. It’s interesting that it mentions he played in the majors for the Pirates, but that wasn’t included in the stats. This was a third series card, released later in the year, so they were able to include him in the set once he played in the majors. They could have included his stats to a certain point, then put an asterisk with that date. One thing of note you can see from the back is that he was already 31 years old, which is interesting with the front noting that it’s his rookie card. You don’t get too many rookie cards of players that old.

If you’re interested in this card, there’s only one gold version on Ebay right now and it’s about $7 delivered due to high delivery charges. There are only six of the regular versions up and there is just one under $3 delivered, as high delivery charges seem to be a thing for this card. The regular version doesn’t look much different other than a silver Upper Deck logo and no numbers on the front.