Today’s Pittsburgh Pirates Card of the Day features a first-time player in this series, as well as a non-Pirates player along for the ride. The 1998 Topps Chrome set featured a two-player card titled “Draft Picks”. Card #492 from the set paired up Pirates outfielder J.J. Davis with Anaheim Angels third baseman Troy Glaus. Davis was the eighth overall pick out of high school in the 1997 draft, while Glaus was selected third overall out of the University of California that year. Those first round picks landed them on the same rookie card, which we will look at today. 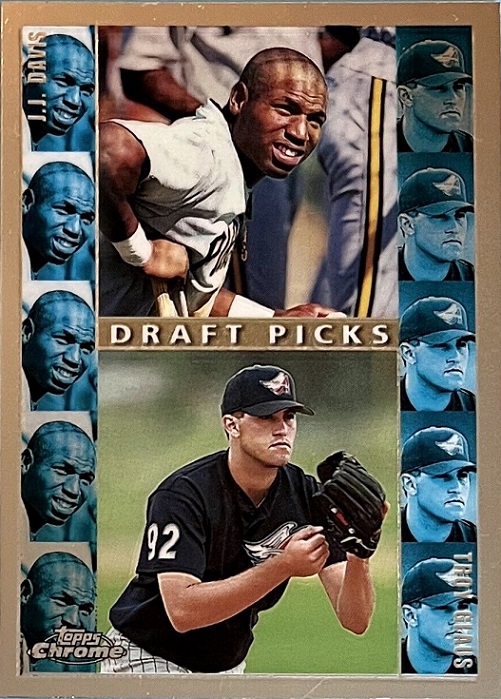 This is a really interesting design, and I’m not sure that there’s anything else out there like it, which I’m not saying is a bad thing. You get regular photos of Davis and Glaus, along with five other looks at the same exact photos of both players going down the sides of the card, with a blue tint added for effect. It’s almost like school pictures, where you get one big photo and five wallet sized photos of the same picture. You know when you can’t really think about what to say when you see something, so you just say “that’s (pause) interesting” and it can be interpreted a few different ways?  That is what I’m doing here. 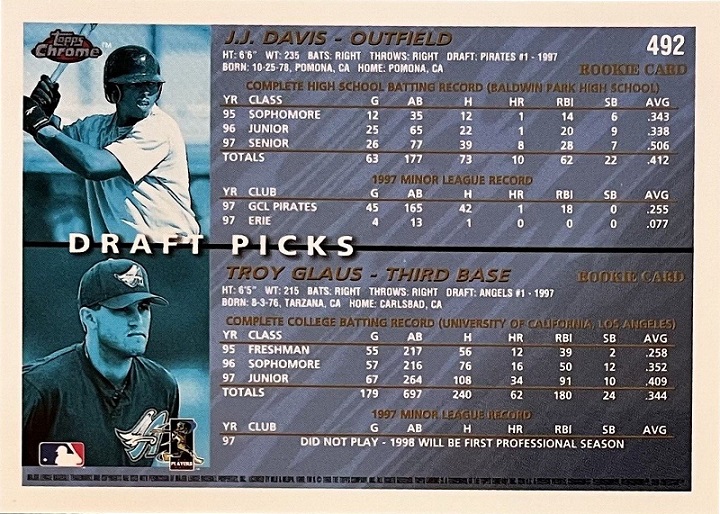 The back only has one photo of each player, but they kept the blue tint idea. The photo choices are very interesting here (this time I actually mean interesting), with Davis getting something completely different from the front photo, while Glaus just has the same photo with his hands in a different spot. They note on the back that this is the rookie card for both players. They have the complete high school stats for Davis and the complete college stats for Glaus.

Davis signed right away and played 49 minor league games in 1997, while Glaus signed too late to get into any games in 1997. It ended up taking him just 109 minor league games before he made it to the majors, with his only minor league time after 1998 being rehab work. It took Davis a little longer to make the majors, as you would expect when you compare college and high school players, though they are just over two years apart in age. Davis was in his sixth year before he made it to the majors.

As most Pirates fans know, Davis did not pan out as a prospect. He never really got an extended look for the Pirates, but he also had a .448 OPS during his three partial seasons in the majors with the team. He played just 14 games after leaving Pittsburgh, giving him 67 games in the majors, which is exactly 67 more than me. Glaus was a star for a few years, putting up a nice ten-year run from 1998 through 2009 in which he hit 303 homers and drove in 854 runs. He also had some nice seasons on defense, leading him to a career 38.1 WAR over 13 years, though his 1999-2008 total was 38.7 WAR, so he wasn’t far off of a Hall of Fame pace during that time-frame.

If you are interested in purchasing this card, it can be had for under $3 from multiple sellers. There is a regular Topps version of this card, and then the Chrome version, which is what you see above, but they both like very similar. They are the same price for the most part, so you’re better off getting the Chrome, though you might like the look of the regular Topps card better. Either way, both of them are cheap. One person has a PSA 10 of the Chrome, and they are asking $75, with a best offer option. The regular Topps has a PSA 10 that is $48, which also has a best offer option.