In 1991, Topps put out a special set for the troops taking part in Operation Desert Shield. They were just like the regular 1991 Topps cards, which were massively overproduced, but they had a special gold foil logo that read Operation Desert Shield. Compared to cards being produced in 1991, these were massively under-produced, which immediately made them collectible. It is said that fewer than 7,000 copies of each card were produced.

The problem for collectors back then was that a large majority of them were distributed in packs to the troops serving in Operation Desert Shield. Many of the cards got lost or ruined (as far as grading goes), so these cards were extremely difficult to find in high grade. Since 1991 was when the card boom was still in its peak, there may have been more card collectors at that time than total cards still in existence from this set by the time 1992 rolled around. That led to these cards being counterfeited, which I will get into more in the pricing section below. For now, here’s a look at the 1991 Desert Shield card of Pittsburgh Pirates shortstop Rafael Belliard, who turns 61 years old today. 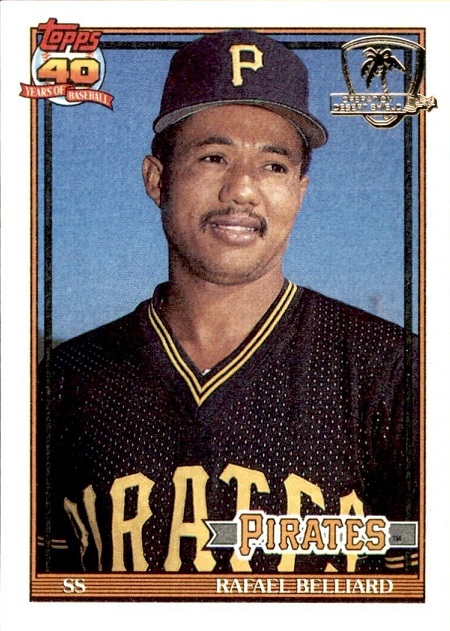 As you can see, Topps included the special gold foil logo in the top right corner. The top left corner had the “40 Years of Topps” special logo on all 1991 Topps cards. It’s a bit difficult to read, but the gold foil logo reads “Operation Desert Shield” Next to the words is a flag, which is hard to see even in person because it’s so small, but I’m including a larger high quality scan with the logo isolated for a slightly better look. 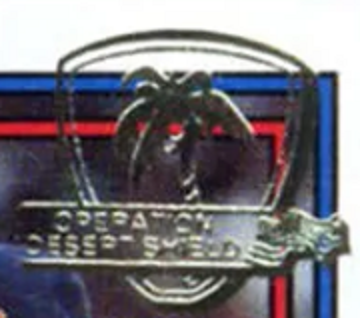 I’ll be coming back to this scan in the pricing section. As for the card of Belliard itself, the 1991 Topps set had a decent look. Not their worst effort, but not great by any means. It probably hurts that these cards are everywhere (the regular set, not the Desert Shield), so I see tons of them when going through old card scans. I do like how they wrote out the Pirates name on the front, so they get an extra point for that work. The “40 years” logo makes for easy identification. 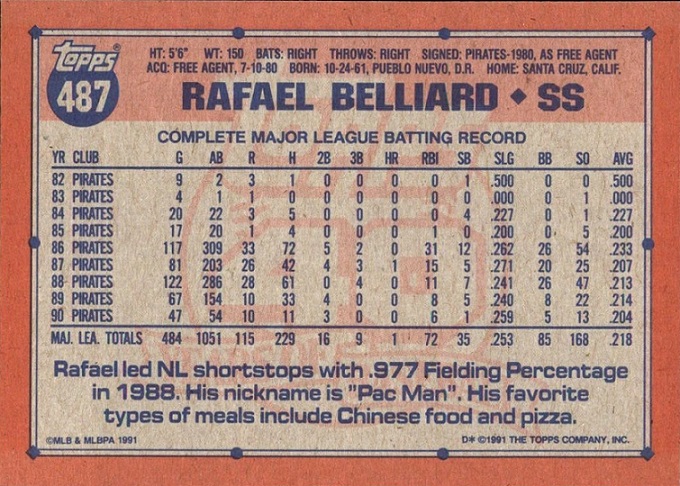 One thing I really like about the back of this particular card is that you get the complete stats from Belliard’s nine years with the Pirates. He signed with the Atlanta Braves for the 1991 season. The 40 Years logo is faded into the background, which is a nice touch. There is nothing different between the regular 1991 Topps backs and the Desert Shield backs, so I could have pulled this scan from any Belliard card (I didn’t, but I could have).

As I mentioned up top, there were counterfeit copies of these cards made, as greedy people with cold black hearts tried to capitalize on collectors hoping to get one of these rare cards back before the internets existed. That’s one of the reasons I included that embiggened (a perfectly cromulent word) logo scan. So you can get a good look at a real logo. It was pulled from the card that the grading company PSA uses on their site for the set. That being said, I would recommend going for a graded copy of one of these cards. I don’t know how many counterfeit copies are out there, I’m sure a majority have been destroyed over the years, so they might not be a big deal now. The Desert Shield cards lost some steam from the earlier prices, as it is now easier to find them thanks to Ebay sales. Copies of this Belliard card came be had in the $5-$10 range from many sellers. There are two graded copies, a PSA 8 and a PSA 9, but both seem high ($46-$69). It would still be wise to get a graded copy (possibly a different player) in hand so you’ll be able to see a real example. A company like PSA knows that these cards were counterfeited, so they immediately send up flags each time one comes in for a grading.

As an amusing side note, one seller has a regular 1991 Topps card of Belliard listed as a Desert Shield card. There are no copies without the logo, so his $14 price tag is even more ridiculous than it would be for an actual legit copy.