Today’s Card of the Day is a card in name only, falling under the collector definition of “card”, which is just a thing to make cataloging collectibles easier. This card is actually a stamp, which was part of a set of 288 stamps produced by Fleer in 1983. This is the first time that we are looking at this set, and we start with a relatively unknown player who was acquired by the Pittsburgh Pirates on this date in 1981.

Many of you probably read the name in the title and had no idea who Manny Sarmiento is, other than he must have been around in 1983. His career was derailed due to injury, otherwise he would probably be better known among Pirates fans. He put up strong stats in 1982 while doing work as a starter and reliever, posting a 9-4, 3.39 record in 164.2 innings. He pitched strictly in relief in 1983, finishing with a 2.99 ERA in 84.1 innings over 52 games. He was 27 years old at the time, but an elbow injury cost him all of 1984, then he played in the minors in 1985 and Mexico in 1986 before retiring. He went from being a solid long relief option for the future in 1983, to never playing in the majors again. He makes his first appearance in our Card of the Day series with this 1983 Fleer stamp.

Here’s the front of the stamp: 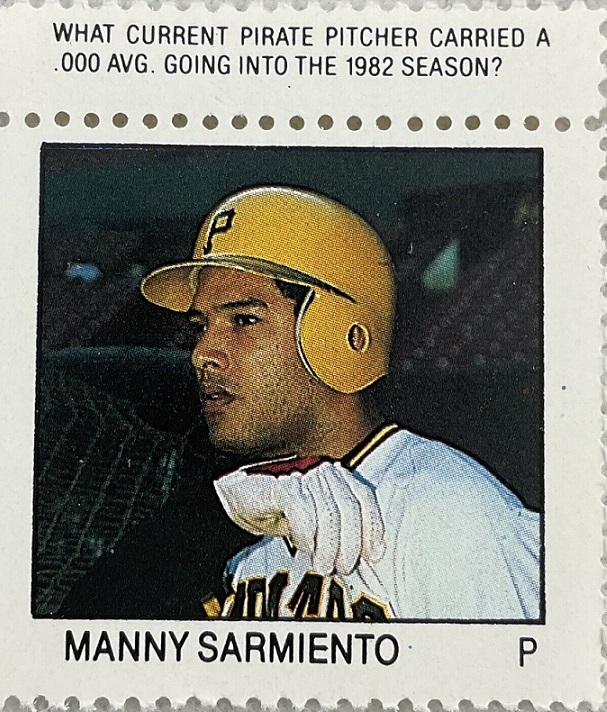 As you can see, this looks like your typical stamp, much smaller in size than a standard baseball card. The photo quality here is outstanding, especially considering it was taken 39 years ago. I am a fan of those old gold batting helmets. The rest of the stamp is rather basic, with his name and “P” for pitcher and nothing else. The backs of the stamps are blank, so they are not numbered. The checklist could either go alphabetical or by team, depending on which source you use. When the stamps are separate from the sheets, you don’t even know that it was a Fleer product.

Above the stamp you see a trivia question that is on many of the stamps in the set (not that specific question). The player below the question in each instance is the answer to the question. Sarmiento had zero career hits going into 1982, but he was mostly a reliever prior to that point, so he only had 30 at-bats. That’s still a lot, but they were spread out over time. However, his 1982 season shows him batting .194 and he struck out just 13 times in 57 plate appearances. By today’s standards, that would make him one of the better contact hitters on the Pirates.

I don’t often recommend choosing an entire set over one card, but I’m going to make an exception here for a great reason. Only a few sellers have this particular stamp and the lowest priced one is just over $3 delivered. However, you can have all 288 stamps in the set, still in the full sheet form, for under $20 delivered from multiple sellers. Another seller has all of the Pirates (including a logo stamp) for about $6, and Sarmiento is easily the least recognizable of the 11 players in the set. If you know just a little Pirates history, you will definitely known all ten of the other players. I would still go for the entire set, as one seller has it for about $15 delivered, including the sales tax.