Today’s Card of the Day subject is not only a first time player in this series, which has been running since March of 2020, it’s also a first time for the set we are looking at today. Keith Osik was a 24th round draft pick of the Pittsburgh Pirates in 1990 out of LSU. He made it to the majors in 1996, and he spent his first seven seasons in the majors with the Pirates. His son Tyler Osik was a 40th round pick of the Pirates in 2017. He didn’t sign, deciding to go back to college, where he turned into a 24th round pick two years later. The young Osik made it up to Double-A during the 2022 season.

Keith Osik is here on this particular day because he’s somewhere celebrating his 54th birthday. The 2000 Topps Stadium Club set was chosen because of the picture on the card. It’s one of those sets that just blends into the era, and you can find numerous similar looking sets, which is one of the reasons it hasn’t been featured here yet. Topps got a great photo for Osik, so now is a good time to check out this bland set from 2000. Here’s card #96 from that set. 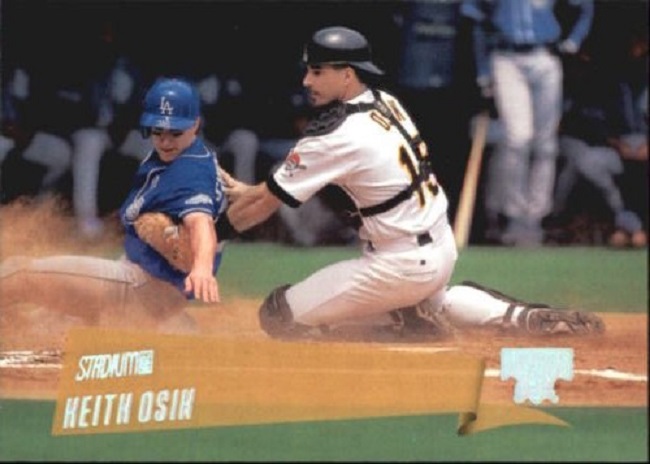 I’ll start with the picture here. I was able to find the exact play thanks to the magic of the interwebs. This is from the third play of a game that took place on July 20, 1999. That’s Craig Counsell being tagged out by Osik to keep the game scoreless. Todd Hollandsworth hit a grounder to Kevin Young and Counsell tried to score from first, but he was out. Here are my quick sleuthing tips if you ever want to try for other cards.

Since it’s a 2000 card (released in February of 2000), the photo is likely from 1999. From there you go to Baseball-Reference and find 1999 Dodgers games at Three Rivers Stadium by going through Osik’s game-by-game page for that season. That narrowed our search down to four games. This is obviously a day game, as are a majority of the game photos on cards. You get better photos during the day. Osik only played one day game in 1999 at home versus the Dodgers, so it was then just a matter of checking the play-by-play. To be sure though, I searched “Craig Counsell Keith Osik” on Google images and two similar looking photos popped up.

As for the card, the borderless photos were popular when they first came out, highlighted by the earlier Topps Stadium Club sets, but you could find them on plenty of sets by 2000. The writing here is an awful idea, which actually looks better on some of the variation cards that are harder to find. Any idea what that blue blotch is on the left bottom corner? I can tell you, but you might not believe it. That’s a Pirates logo…seriously. Moving on to the back… 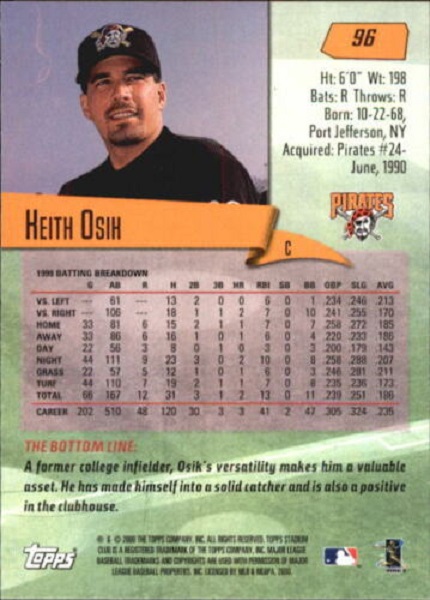 The back is a little blurry, mostly because Ebay has changed up their generic photos for people to use for common card listings. The quality on all of them seems to be lower. The backdrop for the back is a baseball field with a green tint. You get a second photo of Osik and a much better look at the Pirates logo. The stats they decided to include are a bit different than the norm, though Stadium Club always had something new. If you can’t make it out, it’s a breakdown of how Osik did during the 1999 season in situations (lefty vs righty, home vs away, etc). The bottom part mentions that he played infield in college and that his versatility made him a valuable asset. Osik made eight starts at a position besides catcher during his first four seasons combined, playing a total of 90.2 innings in the field split over five spots. I don’t even know if I’d consider that valuable over a full season. It’s definitely not worth mentioning when split over four seasons, especially when the little bio/facts section is so small.

If you’re interested in this card, might I suggest the Chrome version instead. The writing is much better on the front, and the Pirates logo actually looks like the Pirates logo. There are two autographed cards, one for $14 delivered, the other for around $19. The chrome and regular version can be had for around the same price, both having a few options under $4 delivered, going as low as $2 (plus tax).