Today’s Card of the Day comes from a set that has not been featured here yet. I was looking for an oddball Dave Giusti card to use today. He came to the Pittsburgh Pirates in a four-player trade on this 1969. What I found was a 1971 Dell Today’s Team stamp that I never saw before for Giusti. Unfortunately, I couldn’t find a good scan to use, but I was already hooked on using a card from this set. When I saw the picture of the Steve Blass card, I decided to use it instead. It’s definitely different than the normal look of Blass that you are used to seeing. 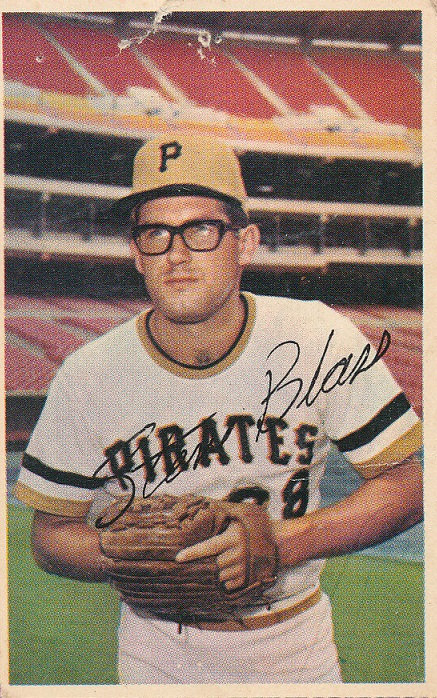 The front of this card/stamp is really basic looking. White border for a photo, facsimile autograph, photo. Nothing else. There’s no identifier on the card, front or back, that let’s you know the name of the set. The stamps measure 1-7/8” by 2-15/16”, which is small compared to the standard card size you’re used to seeing. There are 600 stamps in the set and they came in 24 groups of 25 stamps. You can find these still as part of a sheet that they were usually separated from, or from an actual album that came with some team info and a schedule, along with the stamps.

The Blass card stood out because he’s wearing glasses. I have seen other pictures of him wearing glasses, but that’s definitely a small percentage of his photos from his playing days. In fact, I didn’t even realize this was Blass at first.

Another part of that Giusti trade I mentioned above was catcher Dave Ricketts. If you collect old Topps cards, you’ll know him as the guy who wore thick rim black glasses. I actually looked for one of his cards first and his only Pirates card shows him in a different uniform. So I went to Giusti, then focused on this set. As I scrolled through the small thumbnails on Ebay, I thought I found a Ricketts card for a second, until I quickly realized that he wouldn’t be with the Pirates in a 1971 set. This is a rare look for Blass for sure. I believe the only other card that shows him with glasses is the back photo on his 1971 Topps card. 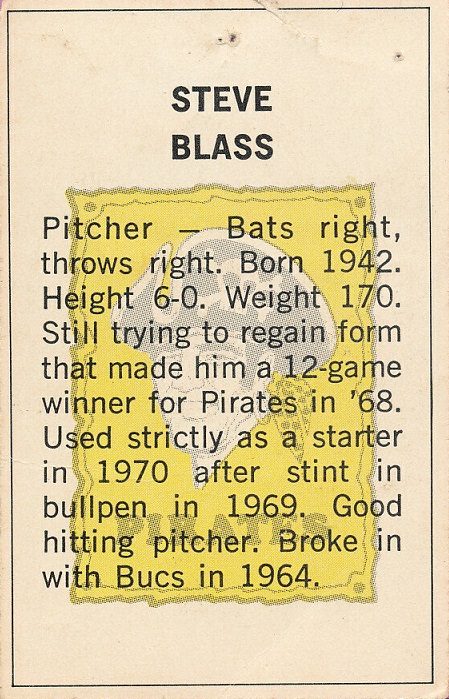 I admit that I didn’t know much about this set before seeing the scan of the Giusti card. I’ve never really looked into buying one of these, but I did guess that since it was being called a stamp, that the back was blank, so this is a nice little surprise. I really like what they did here with the logo faded into the background. They also give you a little bio of bio info on each player. If you know anything about the 1971 season, you know that Blass regained that form that they alluded to here. The backs here have no numbers, so there’s not a standard way to checklist the set. I’ve seen it done by team and alphabetical, with one site doing it alphabetical by first name instead of last name.

If you’re interested in this Blass offering, it will run you about $3-$4 delivered. The only sold one on Ebay in the last three months went for $3 delivered and the only active one is in a lot with Al Oliver and they wanted $7 delivered. They are not plentiful, but it’s also not a popular set, so that keeps the price down.