Today’s Card of the Day comes from one of my favorite all-time sets, and possibly the most important set in baseball card history. The 1886-1890 Old Judge set is not only the first major set, it also gave us numerous real photos of players who otherwise have no other known photos. The set is rare in that none of the cards have a huge number of examples that still exist, but there are thousands of different cards in the set, with variations and multiple poses for almost every player in the set. It’s a set that I recommend to everyone to at least get one card, even if it’s low grade.

This particular card we are looking at today features Pittsburgh Alleghenys/Pirates catcher Jocko Fields, one of just two former Pirates players born on October 20th. He has six different poses in the set. At one time I was trying to get as many different players in the set as I could get. There are over 520 players, but unless you have a ton of money, patience and a little luck, you’re going to hit a wall long before you reach the 500 mark. Some players in the set only have 1-2 known copies of their cards. Other players might come up for sale once every few years and there are 50+ collectors with interest in their card when it does show up.

Fields is one of the easier players to find a card of, but that’s relative to the set. There are no copies available on Ebay right now and no closed auctions in the last three months. That’s for someone who has six different cards, so you can imagine that it would take some time to put together a player set. I was able to do just that about ten years ago, but I bought my first one almost 20 years ago when I first had a job to get better cards, so it took some time to get all six. I didn’t include a pricing section below, but you can get one for about $300 in low grade, with lower prices if the card has been altered (trimmed, rebacked/skinned) and higher prices for nice condition copies.

Today’s Card of the Day is a Jocko Fields card, but he shares it with a teammate. Here’s a look at that card, which has a blank back, so only one scan today. 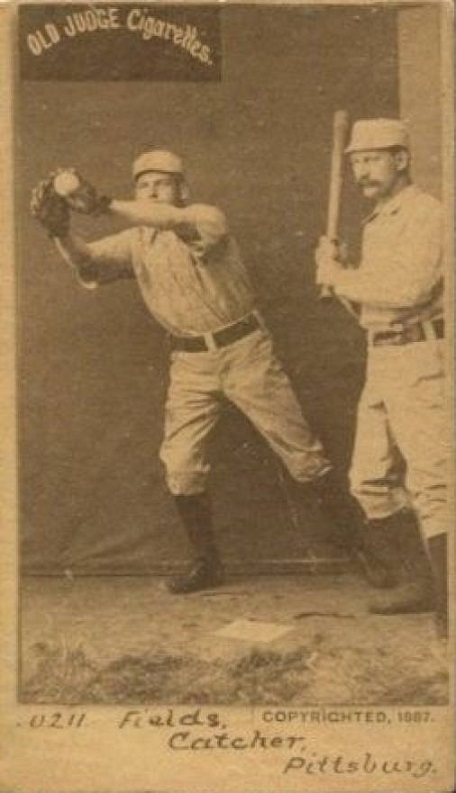 The catalog work for this set was an amazing undertaking and it’s still being updated with new discoveries. A decision with the early work was made to including two players in the card identification if both players are identified on the card. This one tells you that it’s “Fields, Catcher, Pittsburg” at the bottom. That’s why this card is classified as being a Jocko Fields card only. The other player here (the batter) is second baseman Sam Barkley, who has his own cards in the set. Barkley actually appears on a second card of Fields, where he is on the ground being tagged as he reaches for the base. For this to be considered a real two-player card, which are highly collectible from this set, it would have to say “Fields and Barkley”. Some cards are worth more despite only one player being identified because the second player is a Hall of Famer, such as Old Hoss Radbourn and Tommy McCarthy appearing as unidentified players.

The “0211” on the bottom of the card is just a card number from the manufacturer, but that system isn’t used today. This card says “copyrighted, 1887”, but that marking isn’t always a 100% correct way to identify the year, and it’s not available every year that the set was produced over a five-year period. The cards all carry some sort of advertisement for Old Judge Cigarettes on the front. Some are in a box like you see here, while others have a banner across the top or writing at the bottom. Many of the ones with the bottom advertisement can be found with trimmed ads, and it is guessed that parents did that so the kids could have the cards without a cigarette ad attached.

One really interesting thing about this card is the timing of the photo. We know where these photos were taken from old research, and a look at the checklist of players can help tell you the roster at the time. For the specific players with the Alleghenys in this set, the photos had to be taken in mid-May. The interesting part is that Fields was on the bench for the first 23 games of the season, so he didn’t make his big league debut until a little over a week after this photo was taken. The Pittsburgh photos taken in 1889 include Bob Allen, who made the Opening Day roster, but never played for the team, which could have easily happened here as well.

One final thing about this card is the fact that you get a great look at the uniforms from 1887. You also can’t overlook the barely existent catching mitts from back then on both hands. It was thin enough and fingerless to allow the catcher some protection, while also being able to throw the ball still. The uniforms here appear to be the road gray for Fields and the home white for Barkley. Everything dark in the photo, except the shoes, is actually maroon in color.