In 2006, Topps came out with a set that was a tribute to their iconic 1952 set. They used the same front design as the original set, with current players from 2006. The original set had 407 cards, while the new one had 312 cards. Mickey Mantle is card #311 in both sets, the only retired player in the 2006 set. Card #232 in this set is the rookie card of Pittsburgh Pirates outfielder Rajai Davis. He was drafted by the Pirates in 2001 and played for the big league team during the 2006-07 seasons before he was part of the disastrous Matt Morris deal. That’s a trade that doesn’t get enough attention for how bad it was when it happened, and how it somehow got much worse. This is the first appearance in our Card of the Day series for Davis, who is somewhere celebrating his 42nd birthday today.

There wasn’t a great scan of this card, so I apologize for this not being a crisp image. The card really does look better in person, but Ebay’s new bright idea of using generic scans makes it easy for sellers and harder to find good scans of common cards. I even went to the Amazon site and their scan was much worse. Most people know what the iconic 1952 Topps set looks like already. Some know just because of the ultra-popular Mickey Mantle rookie. The set has also been replicated (and reproduced) by Topps over the years in multiple newer sets. If you are unfamiliar with the original look, then welcome to the design.

A 1952 Topps card of a Pirates player has the old 1948-1957 logo placed where you see that mid-2000s logo on this card. The box for the name/facsimile autograph looks exactly the same as in 1952, which the same setup and yellow stars in the black border going around the box. The cards had a white border, black box around the photo back in 1952 as well. Obviously the logo in the top left was specific for this set
(nothing was there in 1952), but otherwise it has the same exact feel. Davis had no big league experience yet when they took this photo. 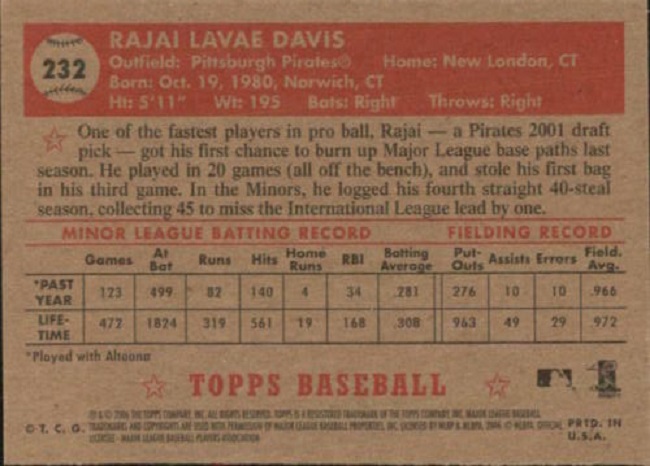 The back is also identical to the original 1952 Topps design. Those cards also had a small bio section, along with one year of stats and then lifetime stats. Notice the statistical categories that they chose to use as well, which mimics 1952. Fielding stats were just as important back then, and it’s not rare to see fielding stats listed/mentioned on earlier cards as well. It’s interesting to note that the back shows his 2005 stats with Double-A Altoona for the “past year”, but the bio section makes a mention of his 2006 final stolen base total.

Knowing that they have stats through early September of 2006, yet it’s still a 2006 set, tells you that these cards were put out late in the year. What’s interesting about that is that some sets are put out before Christmas to help sales, but they are labeled for the upcoming year (as in something released in December of 2022 would be a 2023 card). You would then assume by knowing those two things that this set was released in October/November of 2006, right? That’s what I thought too, but I looked into the set and found out that they were released to the public in January of 2007. Topps does some really strange things, one of which we just talked about with their fake 50th anniversary items. This is another unusual choice. Why did they use 2005 stats, 2006 bio information, and then 2006 is the year of the set, despite being released in 2007? Maybe they do strange things just so people like me talk about them.

If you would like a Rajai Davis 2006 Topps 52 card, you have nine choices currently on Ebay. The lowest priced one is about $2.50 delivered. If you snoozed and someone got it before you, there are still three others under $3 delivered, including the sales tax, which I occasionally forget when I’m mentioning prices. There are so variations or anything of note for this card on Ebay right now.